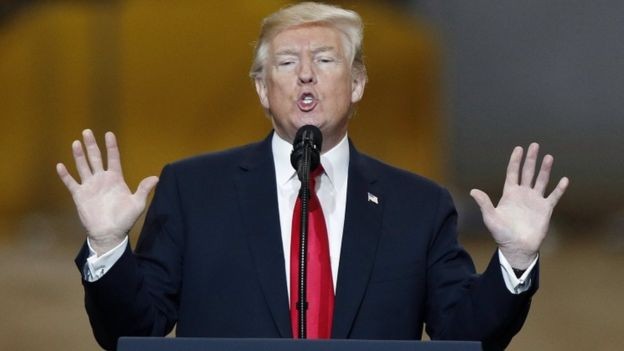 The White House has criticised China after it imposed retaliatory tariffs against the US on a range of goods including pork and wine.

Beijing has introduced duties of up to 25% on 128 American imports following President Donald Trump’s decision to slap tariffs on steel and aluminium.

China said the move was intended to safeguard its interests and balance losses caused by the new tariffs.

In its statement about the tariffs, the White House accused Beijing of “distorting global markets”.

“China’s subsidisation and continued overcapacity is the root cause of the steel crises,” spokeswoman Lindsay Walters said.

“Instead of targeting fairly traded US exports, China needs to stop its unfair trading practices which are harming US national security and distorting global markets.”

The back-and-forth reflects rising tensions between the US and China, which President Trump has described as an “economic enemy”.

What is this fight about?

The US has taken two major steps recently that have triggered tension with China.

On 8 March, it announced global steel and aluminium tariffs saying the measures were necessary to protect US producers and critical to national security. (Certain allies such as Canada, Mexico and the European Union, are in line for exemptions, pending talks.)

China challenged the US use of national security to justify the tariffs and announced retaliatory tariffs on $3bn (£2.1bn) worth of US products.

Those tariffs went into effect on Monday, targeting US goods including frozen pork, nuts, fresh and dried fruit, ginseng and wine.

Who will blink first?

China’s theft of foreign intellectual property is what sparked all this in the first place, according to Washington. If international companies want to operate in China they must hand over their intellectual property for the privilege, thus delivering the likes of German high-speed rail technology into the hands of Chinese engineers.

Yet now that China’s retaliatory tariffs have kicked in, there are also those sympathetic with that argument who are worried that launching a potential tariff war is not the way to fix the problem. Naturally others say China has been getting away with this for years and tough measures were needed in order to force change.

There is also the overall imbalance in US-China trade but a large Chinese surplus, of course, means it is potentially much more exposed during a trade war than America. For this reason Beijing will want to negotiate a way out of this escalating tariff showdown.

Its first set of tariffs are relatively mild but they come in response to the first round of US tariffs and a second has already been announced. There are plenty more American companies to be hit and other nations, especially those in Europe and Asia, could soon find themselves dragged into this conflict.

That dispute, however, is a preview of a bigger showdown between the two countries.

A few weeks after announcing the steel and aluminium tariffs, the White House said it would impose additional tariffs on as much as $60bn in Chinese imports over intellectual property violations.

It said China has practices that put US firms at a disadvantage and unfairly pressure them to share technology, especially in fields such as robotics and telecommunications.

The two sides are now negotiating over the issues, though the White House has also said previous talks have failed, necessitating tariffs.

American businesses caught up in the dispute have raised alarm, noting that China is a large market for certain goods, including pork, soybeans and aircraft.

For example, last year China was the third largest market for US pork, receiving about $1.1bn worth of products, according to the National Pork Producer Council.

“Any restriction on export markets is not a good development for US pork producers,” Jim Monroe, a spokesman for the National Pork Producers Council, told the BBC.

US companies have said that while they share some of the Trump administration’s concerns, they are worried that threatening tariffs is not the best way to resolve the problems.

“The direction of what the US government is doing, and that is to apply some pressure, use some leverage, to level the playing field is the right one, although I don’t think tariffs is the best way to go,” said William Zarit. chairman of the American Chamber of Commerce in China.

Mr Zarit told the BBC that members of his organisation, which represents more than 900 companies operating across China, including Intel, Dell, Honeywell and Coca-Cola, were encouraged to hear that top officials have started talking again.

“I think it shows that both sides want to solve this before it gets out of hand,” he said.

More on this story