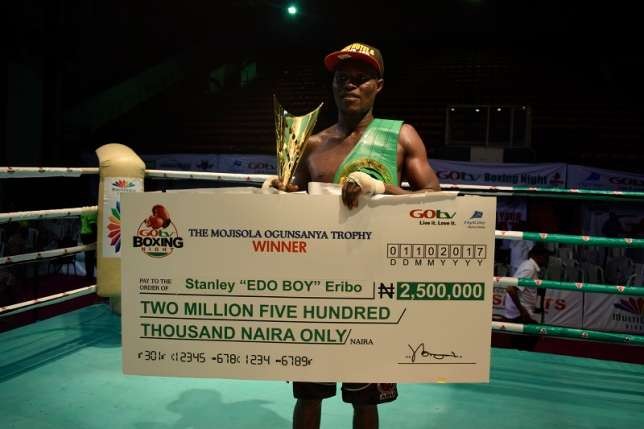 Stanley ‘Edo Boy’ Eribo of Nigeria has retained the Welterweight African Boxing Union Championship belt following his victory over Ramadhan Shauri of Tanzania at the GOtv Boxing Night 12 in Lagos.

The seven-bout event which witnessed a sell-out capacity crowd at the Indoor Sports Hall of the National Stadium, Surulere, was at all times driven to ecstasy following the explosive displays of the boxers.

Top of the scheduled event of the day was Eribo going pound for pound with Shauri who lived up to his billing as both boxers worked tenaciously to cancel each other out.

Edo boy as he is fondly called by his fans,  also went home with the best boxer of the night award — the Mojisola Ogunsanya trophy and N2.5 million.

Eribo, after his victory, said that he was delighted to retain his belt and heaped praises on his opponent for giving him a good fight.

“It was a tough fight for me; I thought I would round him up early in the fight when I landed a heavy punch in the first round that made him hit the canvass.

“He kept on coming and never gave up and was strong enough to withstand the heavy blows I landed on him.

“Indeed, he is a great boxer in the category, I had to change my strategy and worked more on the good jabs which eventually counted at the end,’’ Eribo said.

He said he was glad to fulfill the promise he gave prior to the match of not failing Nigeria most especially when the nation was celebrating its independence day.