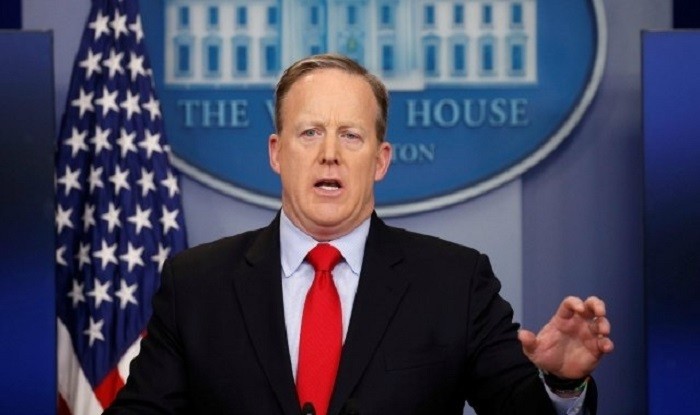 Spicer’s abrupt and angry departure — which caught even senior West Wing staffers by surprise — reflects the latest upheaval in a White House that has been consumed by chaos and staff infighting almost since the day President Trump took office.

Scaramucci has previously had a tense and fraught relationship with both Spicer and White House Chief of Staff Reince Priebus, who both vehemently objected to Trump’s decision to install Scaramucci in the top communications job. Scaramucci has coined a particularly crude nickname for Priebus, and Priebus previously blocked the financier from several other top White House roles.

Scaramucci had been in talks with the president and senior staff all week. But the shake-up comes amid intensifying tumult at the White House as Trump moves to respond to the widening special counsel probe into his campaign’s possible collusion with the Russian government and searches for ways to revive the administration’s stalled legislative agenda.

Trump officially offered the position to Scaramucci, to whom he has become closer in recent weeks, at a meeting with senior staff in the Oval Office on Friday morning. On Thursday, Trump, Vice President Pence, Scaramucci and Trump’s daughter, Ivanka, also huddled privately there to discuss Scaramucci’s new role.

“The President wanted to bring on some folks, to add to the team. They were great,” Spicer said Friday in a brief interview. “This is something you dream of. I can’t thank the president enough.”

Asked if he had any regrets, Spicer — who on Twitter said he would serve in his post through the end of August — replied: “None.”

In a statement read by Sanders during the daily briefing, Trump said he was “grateful for Sean’s work” and wished him “continued success as he moves on to pursue new opportunities — just look at his great television ratings.”

On Friday morning, the West Wing scrambled to present a united public front. Priebus called a private meeting of the White House communications staff and made clear that Spicer, who is expected to help Scaramucci transition into the role, is leaving to give the new communications director “a clean slate,” according to someone briefed on the meeting who, like others, spoke on the condition of anonymity.

Priebus also tried to play down any tensions with Scaramucci, saying the two have known each other for a long time, and Scaramucci told his new team that he is not a “top down” manager, this person said. Scaramucci and Spicer then hugged.

But bringing Scaramucci into the White House is likely to increase the backbiting and tension among Trump’s senior staff, especially with Priebus, with whom he has clashed in the past. A Priebus ally familiar with the move, however, rejected the notion that the chief of staff had tried to block Scaramucci, saying he was simply trying to slow down the process.

Stephen K. Bannon, Trump’s senior strategist, also opposed the hiring, according to two people familiar with the discussions. Though Bannon — the former chairman of the conservative website Breitbart News — likes Scaramucci personally, he worried that he represents the corporate, Wall Street globalists against which he and other White House hard-liners have railed, and does not have the right skill set for the job.

The communications post has remained open since it was vacated by Michael Dubke in May.

Scaramucci addressed reporters Friday afternoon during the daily briefing. He thanked Spicer for doing an “amazing job” and added, “I love the guy. I hope he goes on to make a tremendous amount of money.”

Scaramucci also insisted that he has a good relationship with Priebus and said he offered to bring him on board as chief operating officer at his SkyBridge Capital company following the 2012 presidential campaign, after Republican Mitt Romney lost his White House bid. Priebus, then the head of the Republican National Committee, declined the offer.

“We’re a little bit like brothers,” he said. “We rough each other up a bit, and that’s totally normal for brothers. He’s a dear friend.”

Several times during Friday’s briefing, Scaramucci said that he loved the president and that his goal is to make sure Trump’s message is heard by the public and better represented in the media.

Ivanka Trump, her senior-adviser husband, Jared Kushner, and Commerce Secretary Wilbur Ross had all been pushing Scaramucci for the job — and on Friday, as some West Wing officials made a last-ditch attempt to convince the president to rethink his decision, both Ivanka and Kushner personally reached out to Scaramucci, to reassure him.

The president has been particularly taken in recent weeks with Scaramucci’s hard-charging and frequent defenses of his administration on cable news — the gold standard for Trump. The president also was impressed with how Scaramucci — known as “the Mooch” — ferociously fought back against a CNN article about himself, ultimately leading to the resignation of three CNN staffers involved with the story.

Bringing Scaramucci into the fold represents the most significant shake-up yet for a communications shop that has struggled to amplify the president’s message on the administration’s core economic and national security priorities.

Scaramucci, a Trump campaign loyalist backed by Trump’s children, was slated to join the White House in another capacity earlier this year, but he had challenges resolving ethical conflicts associated with his fund, SkyBridge Capital, which he sold to a Chinese conglomerate with ties to the government just before Trump’s inauguration.

On Friday, Scaramucci told reporters he has been assured by government ethics officials and the White House counsel that there should be no impediments to him joining the administration now.

“My start date is going to be in a couple of weeks, so that it’s a — 100 percent totally cleansed and clean,” he said.

While Trump seeks to overhaul his communications shop, his legal team is also in flux. Trump’s longtime personal attorney, Marc Kasowitz, will step back from his central role in the president’s outside legal team with John M. Dowd, a seasoned Washington attorney with a focus on white-collar crime, now taking the lead in managing the president’s defense. Mark Corallo, a longtime GOP operative who had served as a spokesman for Trump’s legal team, resigned Thursday.

The president has become agitated by the possibility that special counsel Robert S. Mueller III might begin looking into the personal finances of Trump and his family. In an interview this week with the New York Times, the president issued a warning to Mueller that such a move would be a “violation.”

“Let’s go back to what the purpose of the investigation was: Russian interference in our election,” said White House counselor Kellyanne Conway, speaking Friday morning on Fox News. She added, “Where is this going and are Americans comfortable with that — with the taxpayers funding this, with this going off all types of chutes and ladders?”

Trump’s legal team has begun working to undermine the special counsel probe, including investigating ways to highlight what they allege are conflicts of interest by Mueller, The Washington Post reported Thursday. The president has also inquired about his pardon authority.

After the story was published, one of Trump’s attorneys, Dowd, said it was “not true” and “nonsense.”

One Trump adviser said the president has simply expressed a curiosity in understanding the reach of his pardoning authority, as well as the limits of Mueller’s investigation.

“This is not in the context of, ‘I can’t wait to pardon myself,’ ” a close adviser said.

The idea that Trump would proactively pardon people involved in the Russia investigation was immediately criticized by the ranking Democrat on the Senate Intelligence Committee, which is also investigating Russian meddling in the election and possible Trump campaign collusion.

“The possibility that the President is considering pardons at this early stage in these ongoing investigations is extremely disturbing,” Sen. Mark R. Warner (D-Va.) said in a statement. “Pardoning any individuals who may have been involved would be crossing a fundamental line.”

The White House has struggled to remain focused on its agenda amid the constant drumbeat of the Russia investigation. The president himself has only fueled the Russia frenzy, giving an interview Wednesday in which he talked extensively about the probe.

Spicer’s resignation marks a sudden end to his short but rocky tenure. The press secretary undercut his own credibility on his first full day on the job when, at Trump’s urging, he publicly made false statements about the size of the president’s Inauguration Day crowds.

It was a falsehood that set the tone, and one from which he could never quite recover. Trump constantly nitpicked and criticized Spicer’s on-camera briefings, polling his friends about how long he should retain Spicer in the high-profile role. There were other slights. During his first trip abroad, Trump pointedly kept Spicer, a devout Catholic, from a meeting with the pope.

Spicer, a longtime Republican communications operative in Washington, began his time at the podium with a warm relationship with the press corps. But just six months later, some reporters say they now mostly associate him with his “Saturday Night Live” caricature — for which he was parodied by a woman, much to the president’s chagrin — and his red-raced shouting binges.

In private, Scaramucci seemed to have at least entertained the top communications post since June. Speaking at Romney’s private retreat in Deer Valley, Utah, last month, Scaramucci said that he believed the White House was faltering in part because the communications director post was empty, and that communicating directly with the public was the key imperative of this White House, according to one attendee.

If he were in the role, Scaramucci continued, he’d consider starting a daily administration “television” broadcast at 7 a.m., complete with a desk on the White House lawn and guests that included Democratic leaders.

“I like Anthony, but Pelosi and Schumer aren’t going on his state-run morning show,” the attendee said, referring to Senate Minority Leader Charles E. Schumer (D-N.Y.) and House Minority Leader Nancy Pelosi (D-Calif.), and speaking on the condition of anonymity to share details of a private discussion.

Spicer, meanwhile, in the brief interview, said he hopes he’s just “midway through the book” of his life.

The now former White House press secretary had one final messaging flourish: This most recent chapter, he said, might best be titled, “Exciting Times.”