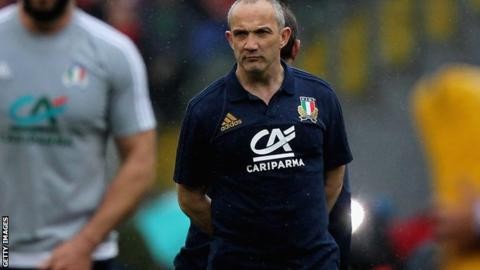 Italy have suffered heavy defeats by Wales and Ireland in this Six Nations.

Mallett, 60, fears more of the same against England on Sunday, but hopes they can at least “lose with dignity”.

“I have always thought the Italian coaching job is the biggest challenge any coach can take.”

The South African, who led Italy from 2007 to 2011, added: “If you can come out of coaching Italy with your reputation intact, then I think you have done a fantastic job quite frankly. I hope Conor can manage that.”

After shipping 96 points in their opening two matches, Mallett has urged Italy to adopt a pragmatic gameplan at Twickenham.

“To try to outrun England, trying to play rugby from your own half, will be suicidal on Sunday,” added Mallett.

“If they do lose the game, they need to try to lose it with a bit of dignity.

“To win at Twickenham for the first time, with this team, I don’t think that is possible.”

Former Harlequins boss O’Shea, an ex-Ireland international, says he plans to change Italian rugby from top to bottom during his tenure, and Mallett agrees the structure needs to improve.

“By the very nature of Italian rugby, you are not coaching a side with equal talent, in a competition that is very tough.

“It has to be about increasing the base of the pyramid. The big problem is the gap between the Italian club rugby – Rovigo, Viadana, Calvisano – and the next step up, Treviso and Zebre.”

Italy’s travails – coupled with Georgia’s rise – have led to calls for a radical overhaul of the Six Nations, with either Italy being replaced or the introduction of a promotion and relegation system.

“I think rugby has to have a promotion and relegation nature to it, even in a competition like the Six Nations,” Mallett said.

“I’m not sure it is good for world rugby to have a closed shop. But it’s not only Italy, there have been times when Scotland have been as weak as Italy.

“It might not come soon, but I do think there should be a system whereby you give an incentive to a Georgia or Romania to have an opportunity to get into the competition.”