Sisters cross Canada-U.S. border, camp in parents’ backyard to be with dying father 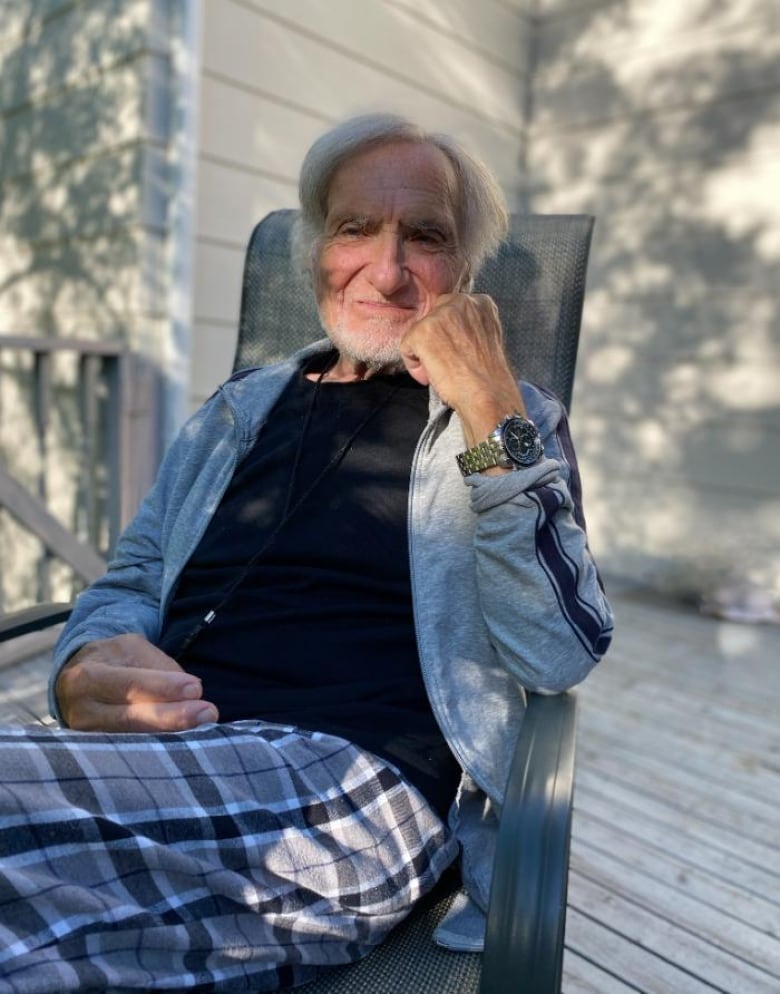 Carmen and Lara Messerlian only have one more sleep to go until they can finally squeeze their dad simultaneously in a giant bear hug.

The two sisters travelled from the United States, where they live with their families, to be with their father, John Messerlian, in New Brunswick.

He has stage four cancer of the kidneys and is dying.

The sisters crossed the Canada-U.S. border almost two weeks ago and have been self-isolating in a tent about nine metres behind their parents’ home in Rothesay.

“We’ll be able to go onto the patio and actually give our dad a proper hug,” said Lara, the younger of the sisters.

Messerlian has renal cell carcinoma and was sent to hospital in an ambulance at the beginning of June when his symptoms worsened.

He spent 10 days at the Saint John Regional Hospital. Because of COVID-19 restrictions, he was allowed one brief visit from his wife, Heleni. Eventually, the medical team suggested their dad stay in palliative care, where he could receive better treatment.

Carmen and Lara Messerlian self-isolated in a tent nine metres from their parents’ home in Rothesay. 3:13

Instead, the family decided to bring him home, so he wouldn’t be in isolation.

Driving to the border ‘no matter what’

This isn’t the first time the sisters received a call like this about their father. His health has been deteriorating for five years.

So the sisters, who are only one year apart, did what they normally do — jumped in a vehicle and headed home to New Brunswick.

Only this time, they had to try to cross the international border that has been closed since the end of March because of COVID-19.

“There was no doubt, no matter what was happening, I would drive to the border,” Lara said.

“And if they turn me away, they’ll turn me away. But I would rather just get there and hope that I’ll be able to see my father.”

Before they left, Lara travelled from Pennsylvania to her home in New York City. She was in quarantine at her in-laws’ home because she had tested positive for COVID-19 in early April, but has now recovered.

From there, she travelled to pick up Carmen in Boston. Then the duo set out for the border crossing at St. Stephen. They arrived at 2 a.m. on June 13, and were the only ones in line.

The sisters had to give an oath they would follow public health guidelines. If not, they were told, they could be fined up to $1 million and possibly face jail time.

The process took a total of 12 minutes.

“It was kind of scary for that moment,” Lara said. “We kind of had a moment of, are we doing the right thing? We don’t want to put anyone at risk and we don’t want to bring anything into the country.

“We certainly don’t want to be patient zero in New Brunswick.”

As a professor of epidemiology at Harvard University, Carmen said she’s a strong believer of mitigation measures to prevent the spread of COVID-19.

“My sister and I took this very seriously.”

Lara, who works in public relations in New York City, said the border scene was intimidating, but she respected the patrol officers because they “had a serious job to do.”

“But we also had a serious situation and a family emergency we needed to tend to,” she said.

Once they arrived in New Brunswick, the sisters began their search for a place to stay in isolation.

Without any luck, they had to choose between spending a night camping for the first time in their lives or sleeping in Carmen’s van.

“It was easy to choose this as opposed to an Airbnb,” Carmen said. “We could be close to my dad, which was a big factor.”

Camping for the first time

But they had to get some camping supplies. Just before Canadian Tire closed, the sisters were on the phone with a staff member in Rothesay. He was picking out all the supplies they would need. Then the items were picked up by a family friend.

“We [had] never pitched a tent, but we were going to do this even if it’s dark,” said Lara. “There was no light at the time,  and there were mosquitos everywhere.”

He’s the perfect package of a person and he’s been unmatched in my life.– Carmen Messerlian

For the next two weeks, the sisters had two large tents, one for sleeping and one for work and leisure. They had lanterns, a makeshift sink, toilet and shower, which offered only cold water in the mornings from a hose. They also had an inflatable bed, which they said allowed them to have the best sleep of their lives.

“Everything, you would need for backyard living,” said Lara.

Throughout their camping experience, they were also checked on by police to make sure they were following the rules.

During their stay, the sisters said they were able to enjoy New Brunswick’s fresh air, eat chips and hang out as they did as teenagers.

“We could be like sisters again, sharing a room,” Carmen said. “It’s a tent, but it’s a room to us.”

But most important, they were able to be near their dad.

The sisters have spent the last two weeks talking with their father about everything, including the weather and childhood stories, and singing old songs he taught them when they were kids.

In his checkered pyjama pants and black T-shirt, he often sits or stands, gripping the deck railing, as Lara and Carmen chat on the lawn.

They’re looking forward to snuggling under the covers with their dad and listening to his heartbeat, which they have been doing during their visits since he was first diagnosed with cancer five years ago.

And although he might be a little slower and 25 pounds slimmer since the last time they saw him, he’s still their dad.

Their father grew up in Lebanon and moved from Europe to Canada in 1969, where he continued to chase his dreams as a musician. He is known by many as the Golden Sax of Spain.

The sisters described him as a feminist, human rights activist and a good cook, who made everything from scratch.

They said he’s also a fighter. And has escaped death more than once.

Carmen and Lara Messerlian returned home from the U.S. and are counting the hours until they can hug their father. Carmen is an epidemiologist at Harvard University. Lara works in public relations in New York City and had COVID-19 this spring. 16:43

Although they’re grateful for the time they’ve had together with him over the past two weeks, time might be running out.

A few years ago, Carmen said, she and her father made a pact that he would live at least until he turned 90.

“He said to me, ‘I don’t want to break our pact. We made this goal together,’ ” Carmen said, trying to hold back tears.

“I said even if you’re not here at 90, we’re still here. We’re together. Nothing separates us.”

Not even a major border closure in the middle of a pandemic.

And no matter what happens, the two women promised they would throw a 90th birthday bash for their father in three years.

“He’s the perfect package of a person, and he’s been unmatched in my life,” Carmen said.