Should the Oakland A’s sign Khris Davis and Marcus Semien to extensions? 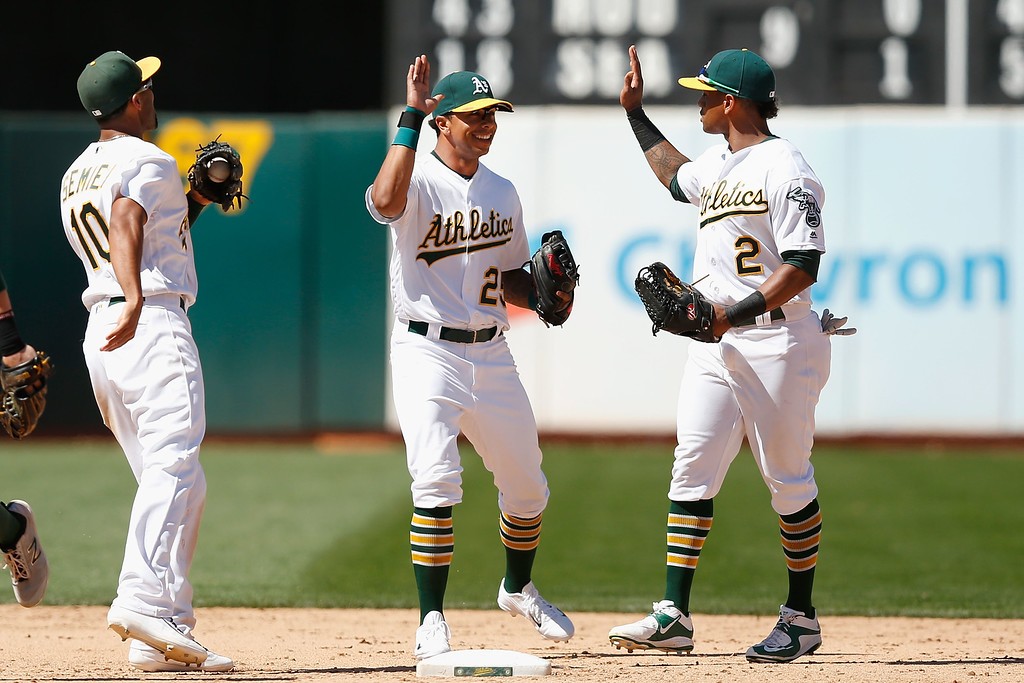 On Friday, Susan Slusser of the S.F. Chronicle reported that the Oakland A’s have discussed the concept of multiyear contract extensions with outfielder Khris Davis and shortstop Marcus Semien. The point wasn’t that anything is imminent, just that a few tires had been kicked, with a reminder that it’s not at all unusual to see the A’s ink young players at least through their arbitration years.

All of that gives us a reason to start thinking about the idea. In particular, there are a few key questions:

Let’s have a look at each player. Remember that both of these guys are still in their arbitration years, which means we’re talking about whether to lock them in long-term as opposed to simply taking them year-to-year (or using them as trade bait).

First up is Khrush. Taken down to brass tacks, he provides comfortably above-average offense almost entirely in the form of dingers, with below-average defense almost entirely because of his poor arm. There’s no specific reason to expect that he’ll get any better than he is now, but also no reason to expect rapid decline in the immediate future. He has two more seasons before reaching free agency after 2019, and next year he’ll be age 30.

How does he fit? In terms of defensive position, Davis is limited to LF and ultimately makes the most sense at DH down the road. The rebuilding A’s have another younger, right-handed, slugging DH in Ryon Healy, with yet another coming up behind him in Renato Nunez (who also happens to be trying out LF this year). The other corner spots will already be packed with young low-average sluggers, most notably Matt Olson, Matt Chapman, and perhaps Chad Pinder. Space is limited and there are a lot of much cheaper options on the horizon.

But then, none of them are Khrush Davis yet. He’s working on his second straight 40-homer campaign in a notorious pitcher’s park, right now in real life. He’s the sure thing that we’ve grown accustomed to rushing to sell high, but a new age is supposedly dawning in which Oakland might pay to keep some stars now and then.

If that is indeed the case, then why not Khris, a popular player who has openly stated his like for The Town? He’s good, but not nine-digit out-of-our-price-range good. If you wanted to sign Edwin Encarnacion last winter, then this isn’t far off even if that comp isn’t quite perfect.

So, it boils down to a question of whether the A’s can afford to earmark a certain percentage of their payroll for the things Khris provides. The fit isn’t amazing, but it can be made to work if you decide to commit to your established star instead of perpetually rolling the dice on the next prospect. As simple as those conclusions might sound, they are important.

What will it take to sign him? Let’s assume we’re talking about more than just his two remaining arbitration years. We’re looking at a three- or four-year deal here. In terms of his arbitration value*, where dingers are gold, he’s probably looking at $10 million next winter and $15 million if he keeps up his current on-field success. In terms of free agent value, Mark Trumbo last winter was an uncanny comp and he got three years at about $12 million per. I might bump Khrush up closer to $15 million due to a slightly more consistent track record (i.e., a second straight big year).

Given all that, I think I’d offer 3/$40M, buying out his arbitration and one year of free agency. This allows him to become a free agent entering age 33 and look for one more solid multiyear contract. A guaranteed fourth year (in 2021) would probably be a dealbreaker, so in return I won’t force a team option at the end.

* my main arbitration comps were Chris Davis and J.D. Martinez, with a dash of Nolan Arenado just for the dingers

Does it make sense? The A’s only have $12 million on the books for 2018 right now (assuming Lowrie is dealt), and none for 2019. There are maybe another $10-12 million in absolutely necessary 2018 arby raises before factoring in Khrush (and assuming Sonny is dealt), and that arby bill doesn’t go up much more than that the next year either. With so many minimum-salary youngsters on the roster now there won’t be too many holes to fill with free agent dollars, so there’s some payroll available in the short-term.

Given that money isn’t as tight as usual right now during the let-the-kids-play phase, and the lineup fit is there if you want to make it, I award this one a rating of, “Sure, why not?” You don’t need to commit to a past-30 slugging LF/DH beyond next year, but, why not in this case? We like him, he likes us, he’s producing, and we’re looking for practice in holding onto good and popular players. This is about as low-cost and low-risk of a place to start as any, as long as it’s kept to three years.

The bottom line: He’s a roughly average hitter in the low-average, good-power mold, but with the chance for further improvement. On defense he can pass at shortstop but down the road makes more sense at 2B or as a supersub of some kind. He’s missed most of this season to injury, but in general is more likely to get slightly better in the near future than to get worse. He has three years of arbitration (ages 27-29) before reaching free agency after 2020.

How does he fit? Right now he’s the starting SS, and none of the current wave of youngsters has to push him off that position. Franklin Barreto could shift to 2B, Chad Pinder (and eventually Yairo Munoz) could be a supersub or simply move to the outfield, and Joey Wendle doesn’t seem to be much in the picture anymore. None of them has a glove that absolutely requires Semien to move. Neither does 2B Max Schrock in the next wave of prospects, and SS Richie Martin is hitting like Andy Parrino is his role model.

Furthermore, Semien is still quite young himself. We probably haven’t seen his prime yet even at his established 2-3 WAR level, so if you ever want him on your team then this is the opportune moment. He fits the rebuild in terms of timeline.

Like with Khrush, you don’t need to keep Semien, but there’s definitely room if you want to make it happen. Factor in that he’s a local guy born and raised, and already famous for his relentless work ethic, and you might even have the makings of a leader for this young core as well as the larger Bay Area community.

What will it take to sign him? Slusser’s column mentions up to a five-year deal last winter, but I’m assuming one of those years was 2017 so let’s talk about four years from 2018-21, through age 30. That means his three arbitration years and first of free agency. In terms of his arbitration value*, if he bounces back to his old self next year, I’m guessing $3M, $7M, and $12M for those three years. In terms of free agent value, one interesting comp is Asdrubal Cabrera, who only got two years at $8 million per at the same age and coming off Semien-esque numbers; let’s round it up to $10 million.

Given all that, I’m starting at 4/$32M, buying out his arbitration and one year of free agency, plus some kind of option situation for one more year around $12-15 million (either team or vesting). This allows him to become a free agent entering age 31 or 32 and look for one more solid multiyear contract. A fifth guaranteed year might not be a dealbreaker, but that’s longer than I’d like to go for pretty much anyone.

Does it make sense? Yes, without question. Unlike Davis, we’re talking about an up-the-middle player here who can probably handle multiple positions. We’re also talking about a guy just entering his prime, as opposed to Davis who will be exiting his before the end of his theoretical extension. Those are key differences that make this one a no-brainer to me, especially given the A’s currently empty payroll. (This is all assuming that by the end of the season it’s become clear he’s fully recovered from his wrist injury.)

Signing Khrush and Semien this winter makes plenty of sense for the A’s. They’re a couple of established performers who aren’t completely obviated by the new wave of rookies, which means they can serve as some veteran presence for the new guys. Furthermore, they’ll be getting paid during the period when those rookies are all cheap and the team isn’t hellbent on making emergency win-now additions.

The rebuild could continue just fine without both of these guys, but it shouldn’t be counterproductively interrupted either. They’re both good, well-liked, and within our price range. If the A’s want to get down to changing the transient culture of this club, then locking this pair up to these deals is a great place to start.