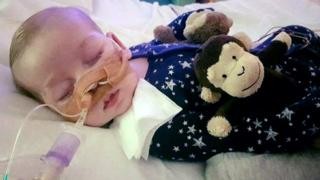 The hospital said police had been called after families were “harassed” and “unacceptable behaviour” was recorded in the hospital.

It is involved in a legal battle to remove life support from the 11-month-old, who has a rare genetic disorder.

His parents Connie Yates and Chris Gard said they did not condone abuse and had also faced “nasty and hurtful remarks”.

Charlie, who was born on 4 August 2016, has a form of mitochondrial disease, a condition that causes progressive muscle weakness and irreversible brain damage, and his parents want to take him to the US for pioneering treatment.

They have lost a succession of court cases to overturn the hospital’s decision that it would be in the best interest of the child to be allowed to die with dignity.

The latest court battle involves new testimony from a US neurologist who has visited Charlie in hospital to decide whether he should travel to America for therapy.

Charlie’s parents want to take him to New York for experimental treatment, which the US doctor said might give him a 10% chance of improving his health.

Mary MacLeod, chairman of Great Ormond Street Hospital, said in a statement that Charlie’s case was “a heartbreaking one”, adding the hospital understood the “natural sympathy people feel with his situation”.

However, in recent weeks the hospital community had been subjected to a “shocking and disgraceful tide of hostility and disturbance,” she said.

She added: “Staff have received abuse both in the street and online.

“Thousands of abusive messages have been sent to doctors and nurses whose life’s work is to care for sick children.

“Many of these messages are menacing, including death threats.

“Families have been harassed and discomforted while visiting their children, and we have received complaints of unacceptable behaviour even within the hospital itself.”

Ms MacLeod, who also chairs the hospital’s clinical ethics committee, said “there can be no excuse” for patients, families and staff “to have their privacy and peace disturbed”.

In a statement issued through a spokeswoman, Charlie’s parents said: “We don’t condone abusive or threatening behaviour to gosh staff or anybody in connection with our son.

“We too get abuse and have to endure nasty and hurtful remarks on a daily basis.

“People have different opinions and we accept that but there is a line that shouldn’t be crossed as it makes a stressful situation worse and is very upsetting for all involved.”

Health Secretary Jeremy Hunt said on Twitter although Charlie’s case was “sad and complex”, this behaviour was “totally unacceptable”.

The case is due back before a High Court judge on Monday.