Scorecard: Spence vs. Brook lives up to the hype 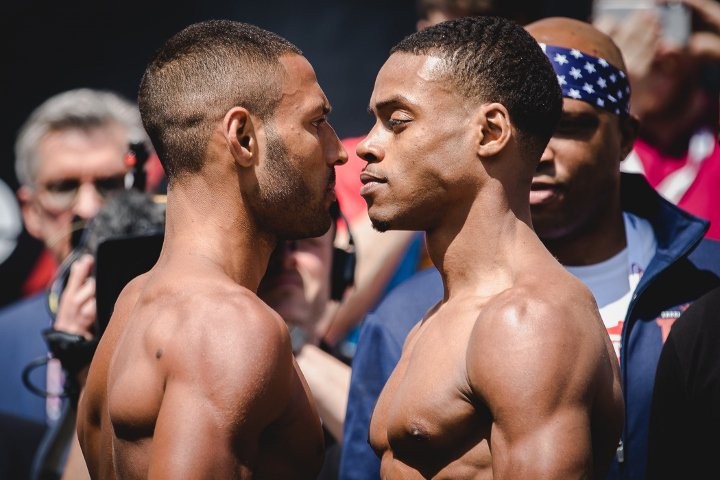 With a welterweight title on the line, Errol Spence Jr. and Kell Brook put on a show in Sheffield, England. 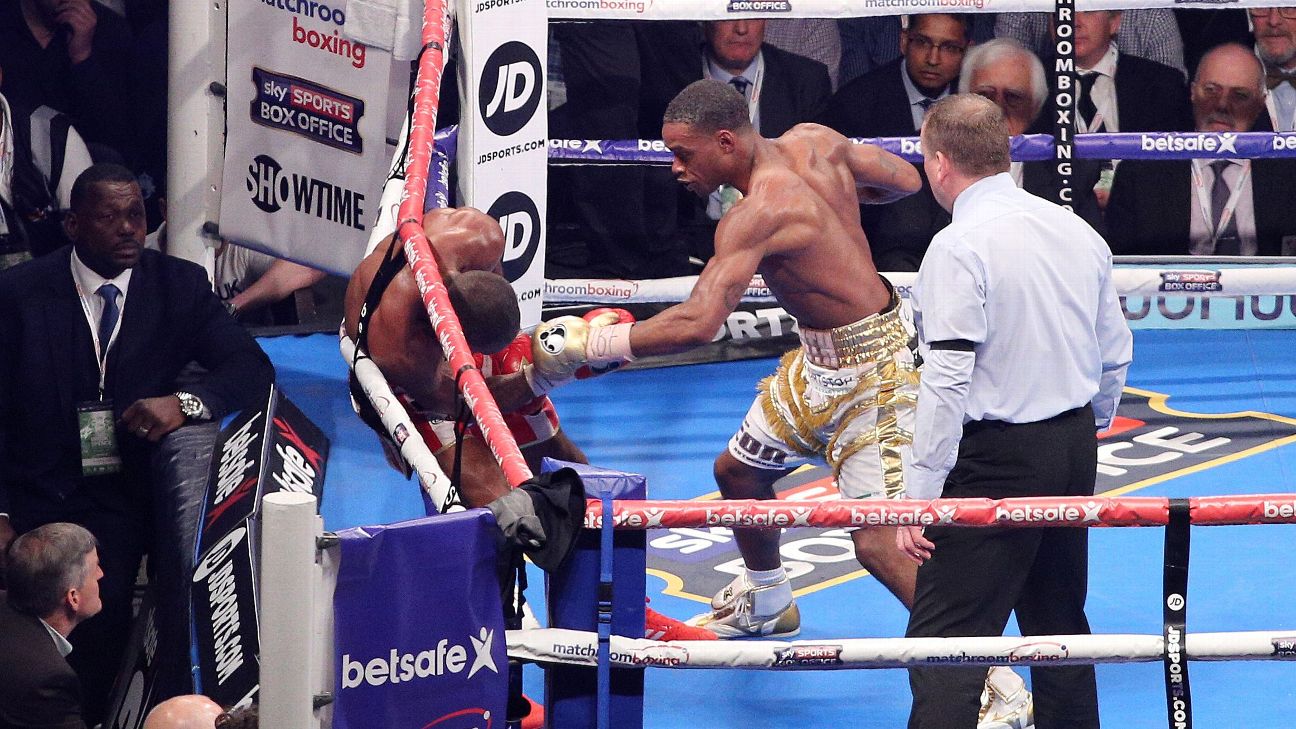 Rafael’s remarks: So far 2017 has been a great year for boxing with one quality match after another. This was yet another as Brook, 31, fighting in his hometown before a crowd of 27,000 at Bramall Lane Football Ground, elected to — in the wake of his loss challenging unified middleweight world champion Gennady Golovkin in September — return to welterweight to make a dangerous mandatory defense against Spence, 27, of DeSoto, Texas, the 2015 ESPN.com prospect of the year and 2012 U.S. Olympian. The fight lived up to the hype and Brook and Spence put on a good show, but it was the extreme poise and precision of Spence that got the job done in impressive fashion.

It took Spence, a southpaw, several rounds to get into the groove, but once he did in the middle rounds, he took over. He fractured Brook’s left orbital bone in the seventh round and drove him to the mat with a series of punches in the 10th round. Brook was feeling the pain of the broken bone and took a knee in the 11th round and was counted out by referee Howard John Foster at 1 minute, 47 seconds. Spence, who led 97-92, 96-93 and 95-94 at the time of the KO, is a big-time talent who could be around for many years in big fights.

Rafael’s remarks: Three previous times Groves, 29, of England, lost super middleweight world title shots. He was twice knocked out by Carl Froch and most recently lost a decision to Badou Jack in 2015. Since that loss, Groves has won five fights in a row, including this one against former titlist Chudinov to finally claim an elusive strap. Chudinov, 29, of Russia, pressured Groves throughout the fight, but Groves also imposed himself on Chudinov, finally breaking through in the sixth round when it seemed like everything he threw landed flush. He was mainly ramming right hands into Chudinov’s face and had him in deep trouble and wobbly when referee Steve Gray stepped in to wave it off at 1 minute, 14 seconds. It was hard not to be happy for Groves after all his previous disappointments. Even Froch, his most bitter rival, who was working the British telecast for Sky Box Office, stood and applauded his victory. The win could set up a unification fight/rematch with countryman and rival James DeGale, whom Groves edged by majority decision in a heavily hyped British and Commonwealth title fight in 2011.

Rafael’s remarks: It’s not a Salido fight without at least some drama is it? Salido, 36, the former featherweight and junior lightweight world titleholder, fought in his hometown knowing a victory likely would set up a rematch this summer with junior lightweight titlist Vasyl Lomachenko (8-1, 6 KOs), whom Salido outpointed in a very close fight in 2014 (for which Salido failed to make weight and was therefore stripped of a featherweight belt.) Salido, out of action for 11 months since fighting to a savage draw with then-junior lightweight titleholder Francisco Vargas last June in the 2016 consensus fight of the year, was supposed to face Thailand’s Amphon Suriyo (18-2, 14 KOs), but visa issues knocked him out of the bout and Perez, 36, of Colombia, took the fight on Thursday. It almost turned out to be a disaster for Salido, who got knocked down hard with a right uppercut in the third round and was badly shaken to the point that he took a knee after getting up to clear his head during the count.

But as Salido has done so many times before, he weathered the storm and rallied. As Perez slowed down, Salido continued to attack, and after the seventh round Perez’s corner told referee Francisco Labiaga that Perez could not continue. At that point, the bell rang to begin the eighth round and Labiaga counted Perez out on his stool. Now it’s up to Lomachenko promoter Top Rank and Salido promoter Zanfer Promotions to hammer out the remaining details for the rematch, which is likely to take place in August or September.

Rafael’s remarks: In February 2016, Ceja lost his junior featherweight world title by first-round knockout to Hugo Ruiz in a rematch. Fighting for the first time in the 15 months since then, Ceja, 24, of Mexico, went on the road and knocked out Moreno, a 31-year-old southpaw from Panama, to become the mandatory challenger for the 122-pound title belt held by Rey Vargas (29-0, 22 KOs), who won the vacant belt in February.

Ceja’s youth and power prevailed as Moreno, a former longtime bantamweight world titleholder, appears to have seen better days. He lost his second fight in a row — and the fourth time overall in his past five bouts — by knockout. Ceja pressed the action while Moreno, a supreme boxer in his heyday, tried to use what was left of his slickness. In the third round, Ceja backed Moreno toward the corner and fired a right uppercut that caught Moreno on the chin and dropped him. He quickly got to a knee but stayed put until referee Jesse Reyes reached 10 at 2 minutes, 32 seconds. Moreno then immediately got up and walked to his corner. It’s the kind of loss that probably marks the end of his career in meaningful bouts, but he had an excellent one. And Ceja will get to fight for his old title again.

Rafael’s remarks: Estrada, a quick 22-year-old southpaw from Panama, won his fourth fight in a row, and by winning this world title eliminator earned a shot at 105-pound titlist Wanheng Menayothin (46-0, 17 KOs), of Thailand, who is scheduled for a defense on Saturday. Juarez, 26, of Mexico, lost his second fight in a row, the other defeat coming by unanimous decision in Thailand in a world title fight against Menayothin in August. Juarez’s big moment of the fight came late in the ninth round when he knocked Estrada into the ropes and to the mat with a right hand to the head. But he was unable to follow up with any more serious damage to turn the tide in his favor.

Rafael’s remarks: Argumedo, 28, of Mexico, who is trained by Eddy Reynoso — who also trains superstar Canelo Alvarez — made his third title defense and took care of business against Mendoza, 38, of Colombia. Argumedo was in control throughout the fight and eventually opened a cut over Mendoza’s left eye, which caused the bout to be stopped at 43 seconds of the eighth round on advice from the ringside doctor. Mendoza saw his six-fight winning streak come to end as he was stopped for the first time in his career. 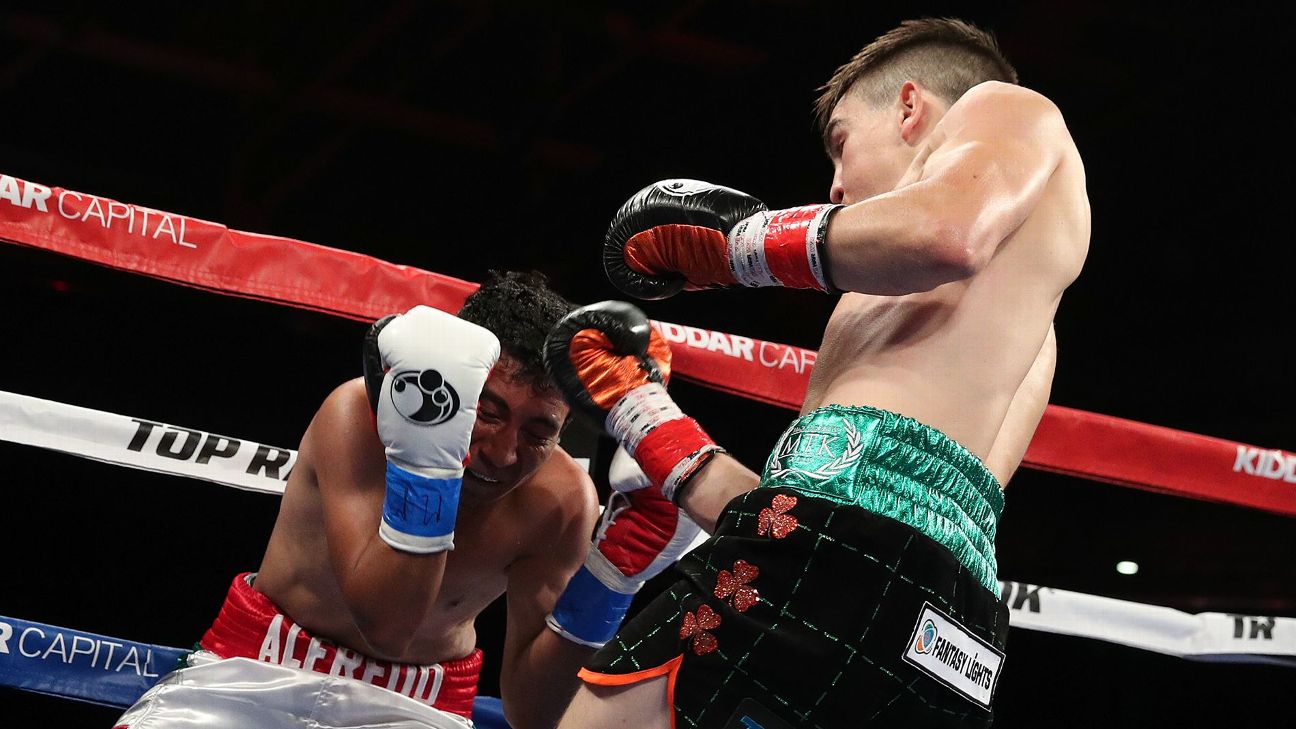 Irish Olympic boxer Michael Conlan stops Alfredo Chanez in the third round via TKO to improve to 2-0 as a professional. Watch

Rafael’s remarks: Conlan, the Irish Olympic star and one of boxing’s most heralded prospects, followed up his electrifying March 17 pro debut — which took place before a sold-out crowd at the Theater at Madison Square Garden on St. Patrick’s Day and featured his pal, UFC star Conor McGregor, walking him to the ring — with a lower-key second pro fight. But Conlan, 25, who now lives in Marina Del Rey, California, was still the headliner of Top Rank’s “Solo Boxeo” card and looked better in this fight than in his debut as he scored his second consecutive third-round stoppage. This time the victim was Chanez, 27, of Mexico, who had never been stopped previously but has now lost three fights in a row.

Conlan dropped Chanez to his rear end with a right uppercut in the opening round and then dropped him again with a right hand to the body in the third round. Chanez beat the count, but was no in shape to continue and referee Celestino Ruiz waved off the fight at 2 minutes, 59 seconds. Now it’s off to Brisbane, Australia, with Conlan for his third fight, which will take place on July 2 on the Manny Pacquiao-Jeff Horn undercard.

Rafael’s remarks: Alvarado, 36, of Denver, returned from an 11-month layoff and looked sharp as he blew out Strode, 34, of Marion, North Carolina, with ease. Alvarado, a former junior welterweight world titleholder known for his action-packed fights and thirst for another title opportunity, won his third low-level fight in a row. He was not challenged by Strode, whom he dropped in the first round with a left hook to the head. Alvarado continued to paste Strode with punches throughout the second round and had him deep trouble. And when he connected with three right hands upstairs that sent Strode into the ropes, referee David Smith ruled a knockdown. After giving Strode the eight-count, he decided to stop the fight at 2 minutes, 40 seconds.