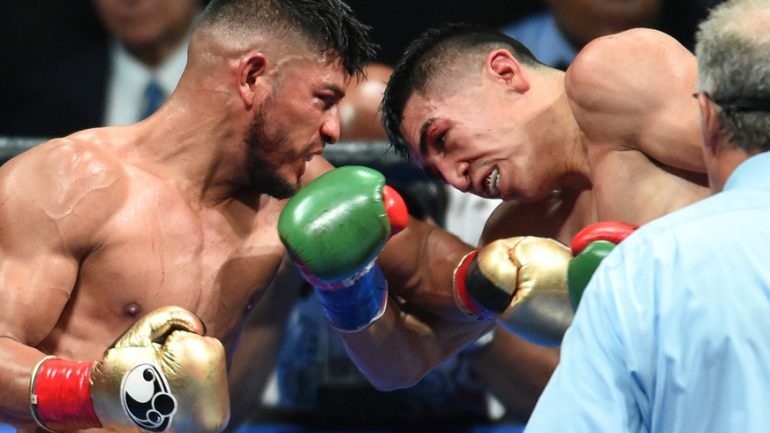 Featherweight world titleholders Leo Santa Cruz and Abner Mares, who were supposed to fight each other in a mandatory rematch this fall, instead will defend their belts against separate opponents first.

Santa Cruz will defend his 126-pound world title against Chris Avalos and Mares will defend his secondary belt against Andres Gutierrez on Oct. 14 in the main event of a Premier Boxing Champions card (Fox/Fox Deportes, 7:30 p.m. ET) at the StubHub Center in Carson, California, promoters Tom Brown of TGB Promotions and Richard Schaefer of Ringstar Sports announced Wednesday.

In August 2015, Santa Cruz (33-1-1, 18 KOs) outpointed Mares (30-2-1, 15 KOs) by majority decision in an action-packed featherweight title bout for Los Angeles bragging rights on ESPN at Staples Center. They were slated to meet in a mandated rematch on Oct. 7 on Showtime, also at Staples Center. A purse bid for the fight was canceled when the WBA was notified that they had a deal.

However, there were still a variety of issues, including how the fighters would split the money and the fact that the Santa Cruz side preferred to have one more fight before facing Mares again in early 2018. So now they will have separate defenses, though the announcement of the Oct. 14 doubleheader said that, assuming they both retain their titles, they have agreed to terms to meet in the rematch in early 2018.

“Leo Santa Cruz and Abner Mares are two of the best featherweight champions in boxing and to have them both fighting on the same card is a treat for boxing fans,” Brown said in a news release. “Against Avalos, Santa Cruz will have the opportunity to demonstrate why he’s considered one of the most skilled and durable fighters in the division, and in his first defense since winning the title Mares can expect a rugged challenge from Gutierrez, who has only lost once in his career and by a close decision.”

“I’m excited to get back in the ring,” Santa Cruz said in the news release. “I’ve been working hard in camp and it’s great to be back in the gym. Chris Avalos is a tough contender who’s fought the best in the division.”

“I never overlook any opponent,” Santa Cruz added, “but my plan is to put on a great performance, and then give fans more exciting fights against Abner Mares and Carl Frampton. I’m ready to prove I’m the best featherweight in the world.”

“I grew up with Leo Santa Cruz, so I know how to fight him,” Avalos said. “We did a lot of sparring wearing headgear as amateurs, and I put a hurting on him back in the day. I’m not scared. I’m ready to fight. I know in the back of his mind, he’ll be thinking about that. I know I’m the underdog, but I’m not scared.

“I have a game plan and I know I’m going to win. I’ve fought two champions and lost to Carl Frampton and Oscar Valdez, but I’m a much better fighter and I’m more focused now than I was for those fights. I’ve got the opportunity I’ve been waiting for and I’m going to take full advantage of it.”

Mares, 31, has not boxed since claiming his secondary belt by split decision from Jesus Cuellar in December and would have preferred to have the rematch with Santa Cruz next, but will have to get past Gutierrez in order to get it.

“I’m excited to be getting back in the ring on Oct. 14,” Mares said. “My fans will once again see the boxing style and strength that won me my WBA [secondary] featherweight title in December. I’m stronger, faster and committed to keeping that title and taking the others.”

Gutierrez (35-1-1, 25 KOs), 24, of Mexico, suffered his only loss by majority decision to former unified junior bantamweight world titleholder Cristian Mijares in June 2016. Gutierrez rebounded for a sixth-round knockout of Wallington Orobio in October.

Gutierrez was scheduled to face Frampton in his hometown of Belfast, Northern Ireland on July 29 in his first fight since losing the rematch to Santa Cruz. However, the fight was canceled the day before when Gutierrez, after weighing in, fell in his hotel bathroom and broke his nose, lost two teeth and cut his chin. Now healthy, he said he plans to disrupt plans for Santa Cruz-Mares II.

“I am coming to destroy Abner Mares,” Gutierrez said. “I am in great shape and I’m very hungry to get in the ring and prove I’m one of the best in the world. I will be world champion and reach my dreams on Oct. 14.”