Rooney retires from England duty after turning down call-up 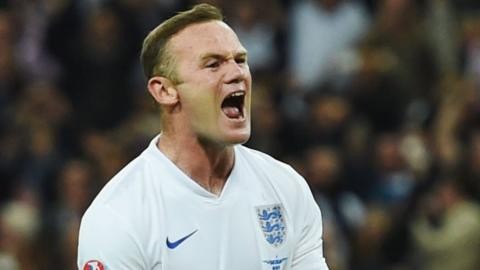 England’s all-time leading goalscorer Wayne Rooney has retired from international football after turning down the chance to be part of the squad for next month’s World Cup qualifiers.

The Everton striker was asked by England boss Gareth Southgate to be involved against Malta and Slovakia.

“Every time I was selected was a real privilege but I believe now is the time to bow out,” said the 31-year-old.

Rooney, overlooked by Southgate for matches against Scotland and France in June, made his England debut in February 2003, in a 3-1 defeat by Australia at Upton Park.

He made his major tournament debut as an 18-year-old at Euro 2004, and his last international appearance was as captain in last November’s 3-0 victory over Scotland at Wembley.

Rooney rejoined boyhood club Everton in the summer, and his announcement comes two days after he scored his 200th Premier League goal in a 1-1 draw at Manchester City.

After that game, he said he was “focusing on Everton” rather than an international recall.

“I’m sure I’ll speak to Gareth Southgate over the next few days,” he added. “We’ll see what happens.”

Southgate is due to name a squad on Thursday for the World Cup qualifiers in Malta on 1 September, and at home to Slovakia three days later.

It was great Gareth Southgate called me this week to tell me he wanted me back in the England squad for the upcoming matches. I really appreciated that.

However, having already thought long and hard, I told Gareth that I had now decided to retire for good from international football.

It is a really tough decision and one I have discussed with my family, my manager at Everton and those closest to me.

Playing for England has always been special to me. Every time I was selected as a player or captain was a real privilege and I thank everyone who helped me. But I believe now is the time to bow out.

Leaving Manchester United was a tough call but I know I made the right decision in coming home to Everton. Now I want to focus all my energies on helping them be successful.

I will always remain a passionate England fan. One of my very few regrets is not to have been part of a successful England tournament side. Hopefully the exciting players Gareth is bringing through can take that ambition further and I hope everyone will get behind the team.

One day the dream will come true and I look forward to being there as a fan – or in any capacity.

Rooney retires from international football as England’s record goalscorer – and perhaps with his contribution undervalued.

The 31-year-old’s career was a mixture of highs and lows after he truly burst on the global scene as a teenager at Euro 2004, and Rooney will forever be associated with an outstanding group of club players who could not replicate their domestic and European success at international level.

Rooney did not score at a World Cup until his third attempt – eventually netting against Uruguay in Brazil in 2014 – but he was also a player who carried England on so many occasions and his place in the history books is testimony to his outstanding contribution over so many years.

He performed selflessly, often in unfamiliar roles, and his commitment was unquestioned. For all the occasional demands for Rooney to be dropped during his England career, there was rarely much proof they would have been a better team without him.

England’s lack of success during his time on the international scene will always be a source of frustration and regret, but history may be kinder to Rooney on reflection upon an stellar career.

Former England and Manchester United teammate Phil Neville says Rooney’s international retirement is a “sad day” as he is England’s “greatest ever goalscorer”.

“I remember when he first got into the squad – the youthfulness, the bravery, the courage that he showed, particularly in his first major tournament at Euro 2004,” Neville told BBC Radio 5 live.

“He was a breath of fresh air. No-one enjoyed playing for England more than Wayne Rooney.”

Neville added: “It’s obviously a day we should be celebrating but also it’s a sad day, losing one of our finest ever players. He’s definitely the greatest goalscorer we’ve ever had.

“Now I hope he gets the send-off and the plaudits that he deserves.”

Former England manager Sven-Goran Eriksson, who gave Rooney his debut, said he was surprised by the decision.

Speaking to BBC World Service, he said: “If he goes on playing like he is now, scoring goals for Everton, then he could still have been an important player for England, with the World Cup less than a year away.

“If I was the England manager, I would have done everything to convince Rooney to play at the World Cup and then make a decision.”

Eriksson, who was England boss from 2001-2006, added: “I remember when training was finished Rooney didn’t want to leave the training ground, he wanted to stay and do free-kicks, shooting etc. He loves his football and that is why he became what he became.”