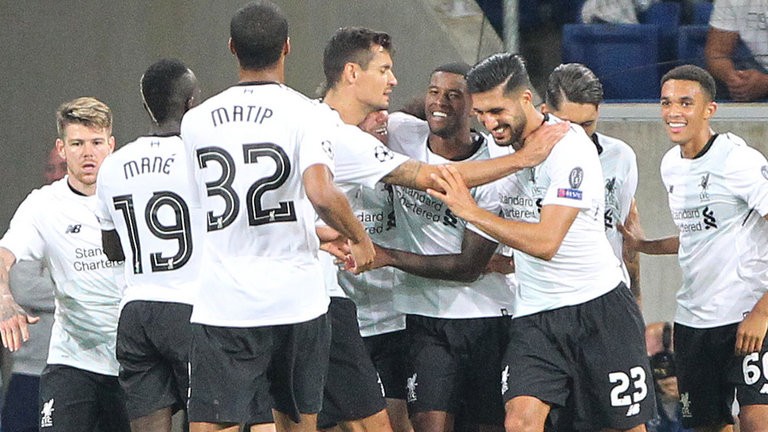 Leading 2-1 from the first leg, the Reds virtually wrapped up the tie with three goals in the opening 20 minutes.

Emre Can’s deflected shot put them ahead before Mohamed Salah reacted quickest to slot in a rebound off the post.

Can stroked in Roberto Firmino’s cross at the back post just 143 seconds later before Hoffenheim substitute Mark Uth, introduced after 24 minutes in a tactical reshuffle, pulled one back.

Former Hoffenheim forward Firmino put the tie beyond doubt after the break, sliding the ball into the bottom corner after Jordan Henderson dispossessed opposing captain Kevin Vogt before unselfishly squaring.

The German side, who finished fourth in the Bundesliga last season, did not lose their spirit and pulled another back when Sandro Wagner headed in Andrej Kramaric’s left-wing cross.

The Reds, along with Chelsea, Tottenham, Manchester City and Manchester United will discover their group-stage opponents when the Champions League draw is made on Thursday (17:00 BST).

Liverpool put themselves in a strong position to reach the Champions League group stage – for only the second time in eight seasons – after holding off a late Hoffenheim rally in last week’s first leg.

Hoffenheim’s 30-year-old manager Julian Nagelsmann insisted before the return leg that his team were “not in awe” of playing at Anfield. Their performance in the opening 20 minutes suggested otherwise.

The Reds – again missing Barcelona target Philippe Coutinho through illness – attacked from the whistle, unnerving the visitors with the energy and movement of forward trio Firmino, Sadio Mane and Salah.

That promising start gave optimism to the home fans and any lingering nerves around Anfield were quickly settled within 10 minutes when Can – with a slice of luck – put them ahead.

Liverpool continued to surge forward and, following a couple of warning signs from the visitors on the counter, left Hoffenheim needing to score three times when Salah calmly converted his first Reds goal at Anfield by pouncing on Georginio Wijnaldum’s effort off the post.

Still Jurgen Klopp’s men refused to sit back and, within three minutes, added the third.

Firmino started the move inside his own half, playing the ball up to Mane before racing down the left flank to collect the return ball and dink to Can at the far post.

That sparked manic celebrations from Klopp, who repeatedly punched the air in delight as he closed in on his own return to the Champions League.

The German, who led Borussia Dortmund to the 2013 final, demanded his side continue to attack after the break, Firmino sealing victory with a richly deserved goal.

However, the ease with which Wagner rose to head in Hoffenheim’s second, highlighting the defensive vulnerability that continues to dog Liverpool, may have given Klopp cause for concern in an otherwise superb night.

After completing the job against Hoffenheim, Liverpool can now start thinking about which of Europe’s top sides they might face in the group stage.

England has only provided two Champions League semi-finalists in the past five campaigns and a poor showing in continental competitions this season could see the Premier League lose its fourth spot in the leading club competition to Italy.

With co-efficient points awarded for reaching the group stage, Liverpool’s passage will help boost England’s European ambitions as well as their own.

You can follow live coverage of the draw on the BBC Sport website from 17:00 BST on Friday.

‘Hoffenheim was the most difficult draw’ – post-match reaction

“We wanted a fast start and we have fulfilled our dream. It was fantastic.

“Playing Hoffenheim was the most difficult draw, alongside Napoli – we had two unbelievably hard games. We learned from the first game and adapted to a little change when they changed from five at the back to four at the back.”

“It has been a brilliant night – the atmosphere was brilliant all night and we were brilliant at the start and set the tempo.

“We let in a couple of goals so we have still got things to work on but overall we’re delighted to get back into the Champions League where Liverpool belong.

“Now we have got to do ourselves justice and win some games there.

“We’re in there and we’ve proved we can play against big teams. We’re happy to play against whoever we’re drawn against.”

Back to the Premier League for Liverpool – and it is a big one.

The Reds, who are unbeaten in their first two games after drawing at Watford and beating Crystal Palace, host Arsenal at Anfield on Sunday (16:00 BST).