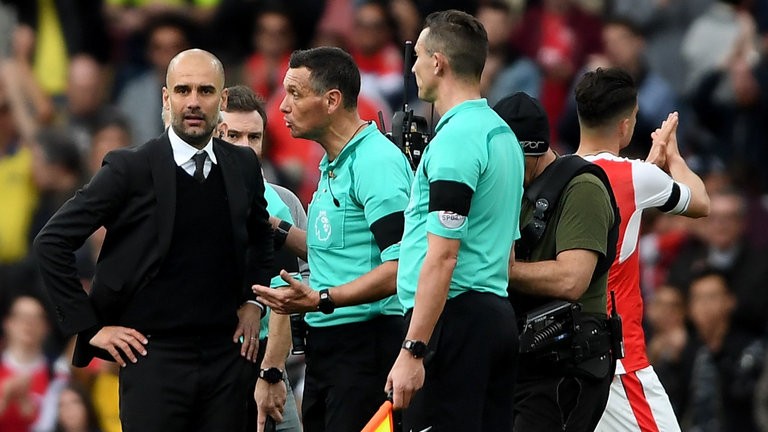 Which big decisions have gone for and against Man City this season?

We round up the controversial calls involving Pep Guardiola’s Manchester City from Ref Watch over the past 12 months.

Former top flight referee Dermot Gallagher has been running the rule over the key decisions in the Premier League on Sky Sports News HQ every Monday, but how many have gone for and against City?

Continuing our end-of-season series, we take a look at the most contentious and most important calls of the 2016/17 campaign.

INCIDENT: Claudio Bravo brings down Wayne Rooney in the area. Man City’s goalkeeper miscontrols the ball, before making a desperate last-ditch tackle on the player, with the referee giving no penalty or taking any action against the Chile international.

INCIDENT: Seamus Coleman catches Raheem Sterling on the ankle with a rash challenge as the pair compete for possession. Sterling beats Coleman to the ball and ends up on the receiving end of a nasty studs-up challenge. The incident goes unpunished by referee Michael Oliver, although replays suggest his may have affected his decision.

Was Coleman lucky to avoid punishment?

DERMOT’S VERDICT: Incorrect decision – This is a red card. The interesting thing from Michael’s view is that Coleman doesn’t look like he caught Sterling. It doesn’t look as though he’s caught him above the boot, you actually think he’s caught him on the ground. That’s what Michael has seen but you cannot hide away from the fact it’s a very bad tackle and a red card but you can see how different angle can tell a totally different story.

INCIDENT: With the score goalless, Chelsea defender David Luiz appears to block Sergio Aguero as the Manchester City striker attempts to break through on goal. Referee Anthony Taylor puts his whistle to his lips, but instead decides against awarding a free-kick despite the apparent foul that denied a goalscoring opportunity and would have seen Luiz sent off.

DERMOT’S VERDICT: Incorrect decision – David Luiz knows what he’s doing, the ball is within possession of Aguero once he gets past. The ball then only runs away because he stops him. I think it’s a foul and a red card.

You see Anthony make that decision in his head, then he takes his whistle away. All I can think is he’s had some input from one of his assistants to say it’s not [a foul] from their angle. That does surprise me because, having seen the incident, if I was the referee you’d have to sell me a big, big deal for me to change my mind like that.

INCIDENT: Diego Costa scores the equalising goal for Chelsea despite appearing to use his arm in the build-up. The Chelsea striker isn’t penalised, beats Nicolas Otamendi and goes on to find the back of the net. The goal is allowed to stand and the Blues go on to win the game.

DERMOT’S VERDICT: Correct decision – I think he’s taking it on his chest. His arm is out, but for balance. Otamendi appeals at the end but his first priority is to go after the ball. He doesn’t even stop to think he’s handled the ball, and for me he’s taken it well and it was a good goal.

INCIDENT: Running onto David Silva’s through ball, Leroy Sane looked to be inches ahead of the line before scoring past Petr Cech to make it 1-1 at the Etihad. The linesman gave Sane the benefit of the doubt, but Arsene Wenger claimed the goal should not have stood.

INCIDENT: As Raheem Sterling shot past Cech to make it 2-1 to the hosts, David Silva was stood in an offside position, but was not adjudged to be impairing the goalkeeper’s vision. Silva did flick out a leg, but was not in line with Cech at any point. Wenger again claimed the goal should not have stood, though Cech admitted that Silva had not come into his line of vision, and that his own Arsenal team-mates were the only players obstructing the view as they attempted to block Sterling’s effort.

INCIDENT: After Hugo Lloris failed to clear the ball with a diving header outside the area, the Frenchman deflected the ball onto Leroy Sane’s hand before the Man City man scored into the empty net for 1-0.

DERMOT’S VERDICT: Correct decision – It strikes his hand, but it has to be deliberate for it to be penalised, and when you see how close he is to the goalkeeper, I don’t think he has any intention to handle the ball. It has just hit him. It’s impossible for the referee to give, however, because Sane’s body shields the view.

INCIDENT: As Raheem Sterling raced through on goal, Kyle Walker pushes the City man on the shoulder from behind, putting him off balance before a weak shot went straight at Lloris.

DERMOT’S VERDICT: Incorrect decision – It should be a penalty and a red card. This raises a few more issues. We don’t want to encourage players to go down, but in that instance, what we have to do in return is say: “OK, he didn’t go down, but he’s clearly being shoved off balance and it’s a penalty.”

INCIDENT: James Milner catches Raheem Sterling from behind as the midfielder looks to convert from close range. Sterling then misses the ball because of the touch from Milner, and Fernandinho misses at the far post too. Nothing given.

DERMOT’S VERDICT: Incorrect decision – penalty should be awarded. The first problem is Michael Oliver is not really in the best position, so he’s looking for clues. I think it is a penalty, but it’s a penalty he can’t give because he’s not sure. If they’re going to look at the clues, they are there, for instance why would Sterling go down? It was a difficult, difficult decision, and one I don’t think he was willing to gamble on.

INCIDENT: Leroy Sane is tripped in the box by Marten De Roon. The City winger goes over under a challenge from the Dutchman, with referee Kevin Friend pointing to the spot, but it does look as though the German goes down easily.

DERMOT’S VERDICT: Incorrect decision – I do not think it is a penalty. I know a lot of people do, but I think Sane has made the contact himself, he has already lost the ball, he sees a leg and uses it to go into himself. He [Sane] initiates the contact rather than the other way round and he has quite clearly not been fouled. In Kevin’s defence, he will say he was immediately sure and that De Roon had made the foul.

INCIDENT: David Silva scores to give City a 1-0 lead but Raheem Sterling tries to play the ball when standing in an offside position. Sterling attempts to play Silva’s goal-bound shot but does not make contact. Leicester players appeal for offside against the England winger but referee Bobby Madley awards the goal.

Was Sterling active for City’s opener against Leicester?

DERMOT’S VERDICT: Correct decision – The key issue is, has Sterling played the ball? I’m not convinced he has. I don’t believe Kasper Schmeichel can ever get that ball. The other player he can impact is Fuchs and if you look at Fuchs, he doesn’t move because the ball is past him. Sterling was not in front of Schmeichel, he didn’t block his view. By trying to kick the ball Sterling did not prevent Schmeichel from saving it and I don’t believe he prevented Fuchs from playing it. But it does show how difficult it is to be an assistant!