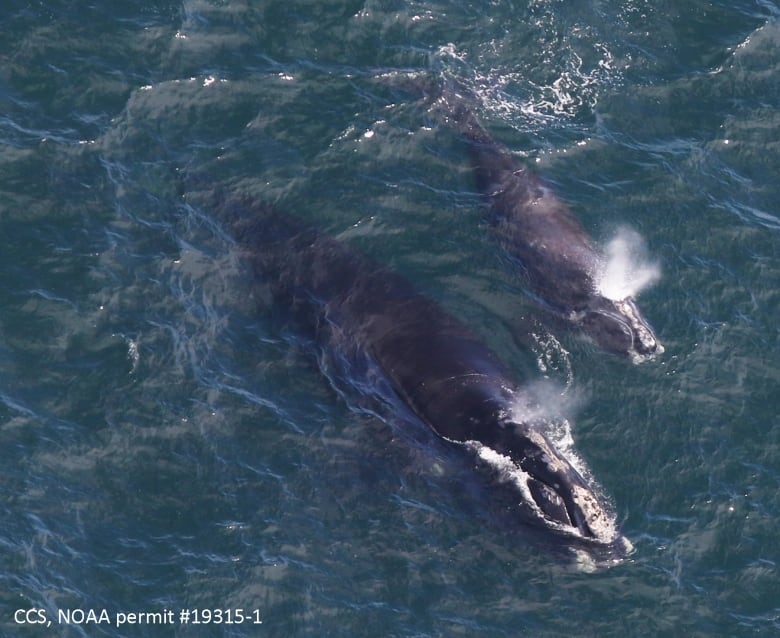 Reduce the number of fishing lines in the water and modify gear.

That’s what an advisory group for the U.S. federal government recommends to help save the endangered North Atlantic right whale.

The group proposes the number of lines in the water be reduced by up to 50 per cent in some jurisdictions and that the breaking strength of buoy lines be reduced to 1,700 pounds (771 kilograms) or less.

Now the onus is on the U.S. National Marine Fisheries Service to consider acting on those recommendations.

While researchers from both countries agree that there needs to be less rope in the water, the recommendations are a different approach to that of the Canadian government, which imposed fisheries closures in the Gulf of St. Lawrence last year and again in 2019. 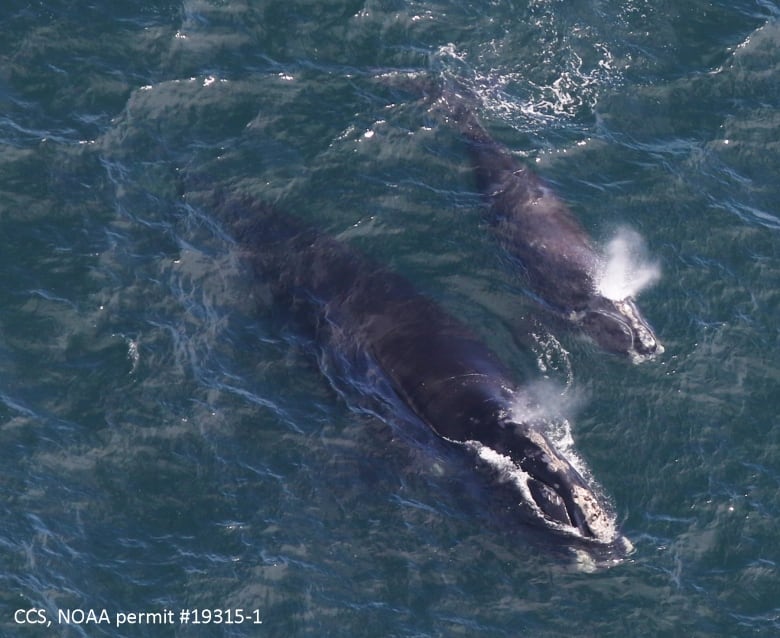 But the vast differences in how government works in the neighbouring countries means different strategies and timelines to reach the same goal.

“I think there’s a tradeoff between speed and durability,” said Jane Davenport, senior attorney at Defenders of Wildlife, who attended the reduction team meeting last week.

“The benefit of the U.S. system is once you do a regulation, it’s hard to undo it. In Canada, because of the way your system works, a minister can decide to do one thing one year, and one thing a different year and then just stop doing it altogether a third year.”

In 2017, 12 right whales were reported dead in Canadian waters, along with another five in U.S. waters.

The latest report from the North Atlantic Right Whale Consortium says there are only 411 left, but the Canadian government has undertaken measures to try to protect them.

“The measures that we’ve got in place right now have primarily focused on keeping gear away from the whales altogether, with an objective of avoiding an entanglement as opposed as opposed to simply mitigating the impact of the entanglement,” said Adam Burns, a director with Fisheries and Oceans Canada.

While Burns did not attend the meetings, he said Canada was there as an observer. 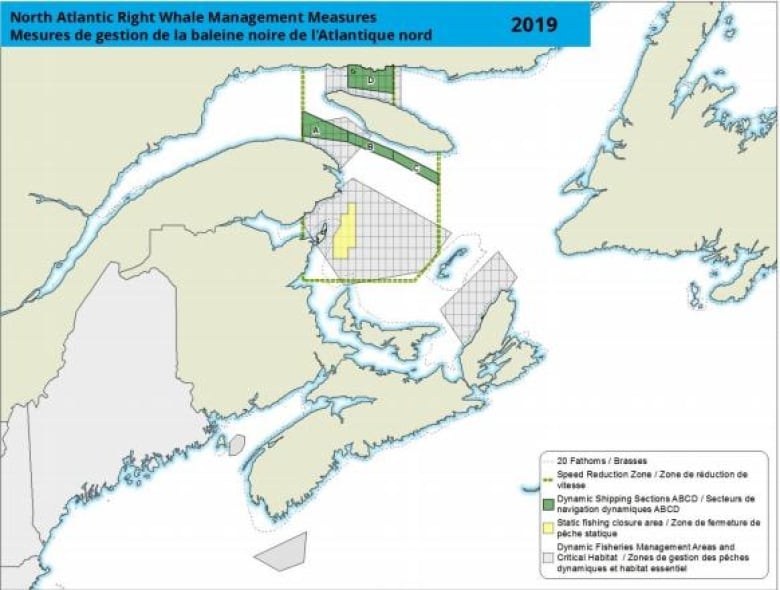 The new season-long, no-fishing zone has been reduced by a third and elongated more north to south. (Government of Canada)

“We go there to listen to the discussions so that we’re aware of what measures they’re potentially contemplating,” he said, adding that they work with the U.S. on regular basis to exchange best practices.

“Any time either country implements new measures, the other always looks at what’s been implemented and sees if there’s lessons to be learned there.”

Burns said there are benefits to the group’s recommendation to modify gear — and that’s something Canada has been researching as well.

“We have been working with our industry on a variety of pilots, testing new technologies, things like ropeless fishing gear, so that there’s no lines at all,” he said.

But for this year, Burns said the federal government is continuing to impose fisheries restrictions instead of gear restrictions.

There is a static-closure zone where lobster and crab fishing will not be allowed in the middle of the Gulf of St. Lawrence, where 90 per cent of right whales were spotted last year. There are also dynamic closure zones, where if a whale is spotted, that area around it will be closed for a period of time.

But Burns said based on research by scientists, there won’t be closures in shallow water where the whales are unlikely to be present.

Research has also shown that fishing rope is the culprit for most right whale deaths.

Rope entanglements are often the culprit for the deaths of North Atlantic right whales. (International Fund for Animal Welfare)

“The safest thing to do is get the line out of the water, because lines that aren’t in the water can’t entangle whales,” Davenport said.

She said the conservation community in the U.S. is appreciative that DFO “stepped up so significantly” in the Gulf of St. Lawrence, but hopes to see stronger protections in other fisheries.

“We think there has to be a sustained commitment,” she said. “This is not an issue that’s going to go away.”

There are two areas designated as critical habitats for the right whales — the Roseway Basin off the southeast of N.S. and the Grand Manan Basin in the Bay of Fundy — which are part of the designated dynamic closure zones.

‘We just don’t have much time left’

“It’s important that measures be spread equitably throughout the right whale’s range,” said spokesperson for NOAA, Jennifer Goebel, in an email.

She said there while there was a general recognition around the meeting table that Canada has taken measures to reduce right whale interactions with fishing gear in the Gulf of St. Lawrence, there are still other areas where Canadian fishermen are using gear that is harmful to the right whales.

But despite the seven right whale calves spotted this winter — which Burns said is a positive sign — it’s apparent that the fight to save the critically endangered species is far from over.

As the U.S. now waits to see whether its National Marine Fisheries Service will implement the recommended regulations to protect the right whales, Davenport said she’s hopeful Canada will continue to work with them to tackle the problem.

“We just don’t have much time left for this species,” she said. “But neither country can save the species on its own.”