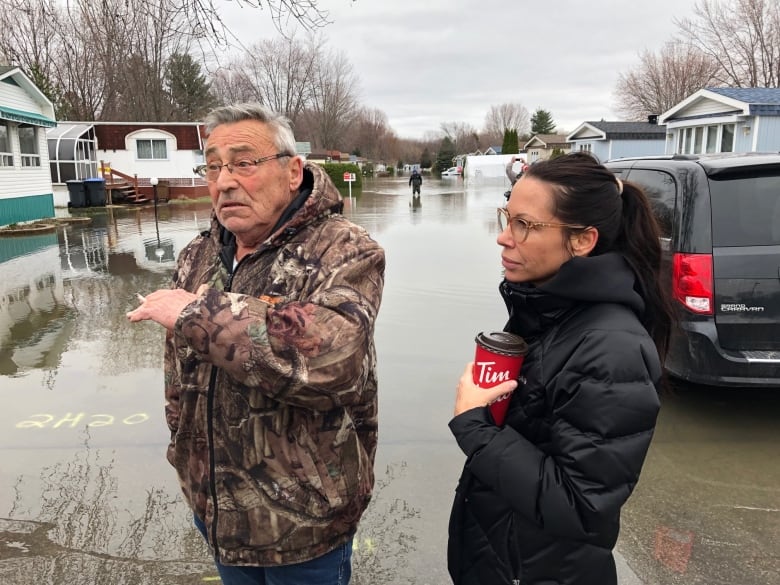 Annie Pépin’s kids were playing outside with her father Saturday as she cleaned the kitchen after supper. Sirens, and the blaring of a police cruiser’s loudspeakers, shattered the evening calm.

“Evacuation now! Evacuation now!” she recalled hearing. “I got outside and I looked at my kids and they were screaming and crying. And then everybody was running.”

A 50-metre section of a natural dike holding back the Lake of Two Mountains had breached in Sainte-Marthe-sur-le-Lac, an off-island suburb northwest of Montreal.

“The water came pouring in just like a tsunami…. It wasn’t there and then it was there,” a Sainte-Marthe resident, Michele Ellison, told a CBC News radio special on Sunday. “You had to get out fast.”

Another Sainte-Marthe resident, Francis Labbé, was driving home when he heard the dike had breached. Initially he thought he lived far enough away to be spared the onrushing water.

“When we arrived home, we had no choice but to consider that the water was rising at an impressive pace. We had approximately 40-45 minutes to do something,” Labbé said. 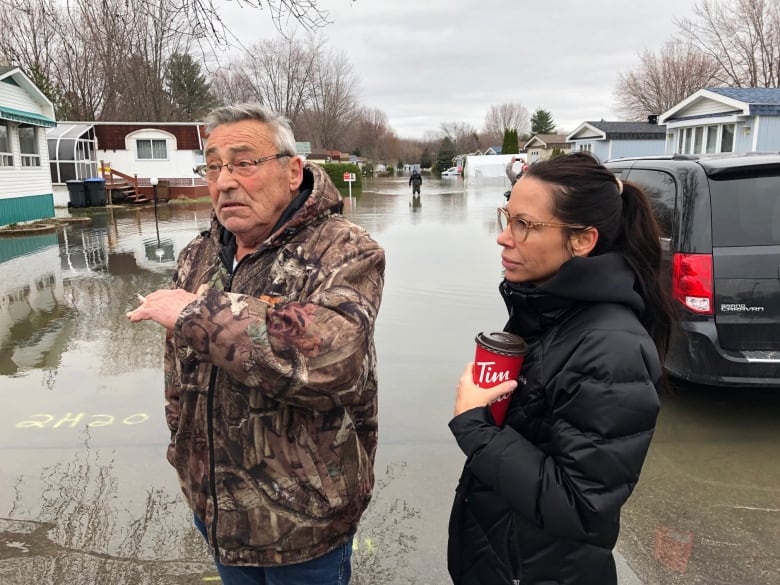 Robert Pépin and his daughter Annie Pépin were at his home with her kids when their quiet evening was interrupted by police sirens, evacuation orders and a rushing wave of water. (Jay Tunrbull/CBC)

He frantically moved anything of value upstairs. Then police knocked at his door and told him to stop, and get out.

Roughly 200 Sûreté du Québec officers were deployed soon after the breach, working with local police, the fire department and Canadian soldiers to go door to door “extremely quickly” and vacate some 50 streets.

They managed to get more than 5,000 residents to high ground in just a few hours.

“Yesterday there were lives that were saved here by fire officials and police officers,” said provincial police Sgt. Daniel Thibaudeau on Sunday morning.

“We took people out. If we hadn’t done so, we’d be talking about serious injuries or deaths.”

Nobody was injured and nobody is missing after an estimated 2,500 homes were evacuated. By 10 p.m., the water was more than two metres deep in the worst-hit areas.

Roughly a third of the town is currently under water, flooding homes and streets a half-kilometre in-land. First-responders went door-to-door in the evacuated neighbourhoods on Sunday, monitoring water levels and ensuring residents were safe.

Evacuees in Sainte-Marthe-sur-le-Lac, an off-island suburb northwest of Montreal, attempted to rescue pets and recover possessions after a 50-metre section of a natural dike holding back the Lake of Two Mountains breached last night. 0:36

The Canadian Red Cross is on the scene, offering assistance to evacuees. People are being offered a place to sleep, as well as psychological support.

The vast majority of evacuees found friends and family to stay with. Around 50 people are being housed temporarily at the Olympia Arena in neighbouring Deux-Montagnes.

After touring Sainte-Marthe-sur-le-Lac on Sunday, Premier François Legault announced the Quebec government is giving an additional $1 million to help the Red Cross meet the most urgent needs of the evacuees.

Meanwhile, efforts to repair the dike are already underway. Authorities are also trying to stem the flow of water by building additional dikes on the flooded streets, and then pumping water back toward the breach.

Electricity was shut off to more than 2,000 Hydro clients in Sainte-Marthe-sur-le-Lac, a boil-water advisory was issued and residents were told not to flush their toilets for fear of sewer backups. 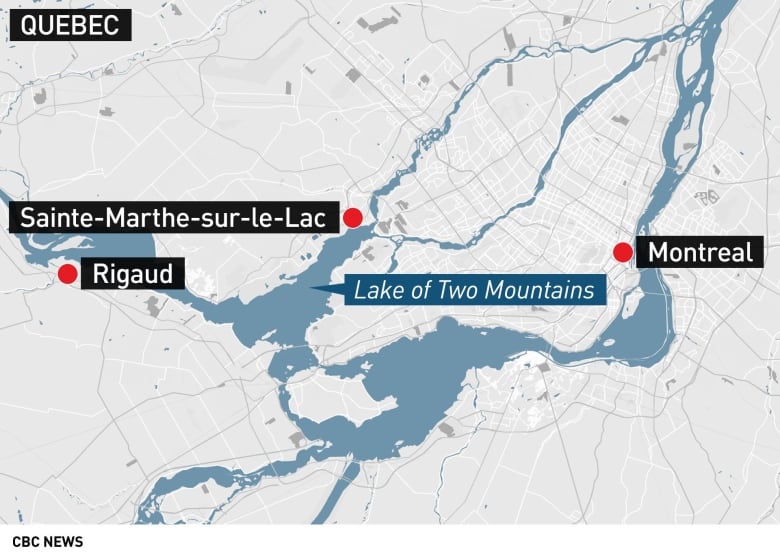 Because people had to leave so quickly, they may have left important items, such as medications or pets, behind, Thibaudeau said. In cases like that, he said people should contact city officials to see if an escort is possible.

“We don’t recommend anyone go on their own,” he said. “We ask for people to respect the barriers here.”

Rescue personnel are able to retrieve pets and shelter the animals, he said. Police are also maintaining a presence in the neighbourhoods to ensure there is no criminal activity, he added.

With the situation in Sainte-Marthe-sur-le-Lac, nearly 7,700 Quebecers have been forced from their homes since spring flooding began in different areas around the province two weeks ago.

That’s almost double the number of evacuees during the 2017 floods in Quebec, considered unprecedented at the time.

Around 5,500 homes across the province have been flooded this year, according to government figures, compared to 5,300 in 2017. 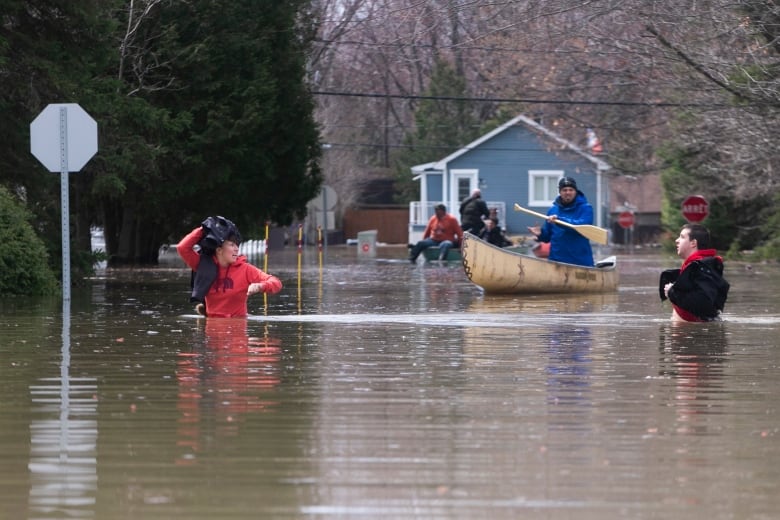 “We are well aware that these are significant numbers,” Public Security Minister Geneviève Guilbault said during a news conference at a government operations in Quebec City. “The next few hours will remain critical.”

Guilbault said, though, that with no rain in the forecast until Wednesday, the situation should stablize.

“This will at last give our teams, and the residents affected, a chance to catch their breath,” she said.

Public Security officials remain concerned about water levels around Gatineau and Lake Saint-Pierre in the Mauricie region, northeast of Montreal, along with Lake of Two Mountains.

“In the rest of the province, things seem pretty much under control. We’ve seen the worst,” Legault said. “But those three spots we’re monitoring very closely. There could be a deterioration over the next 48 hours.”