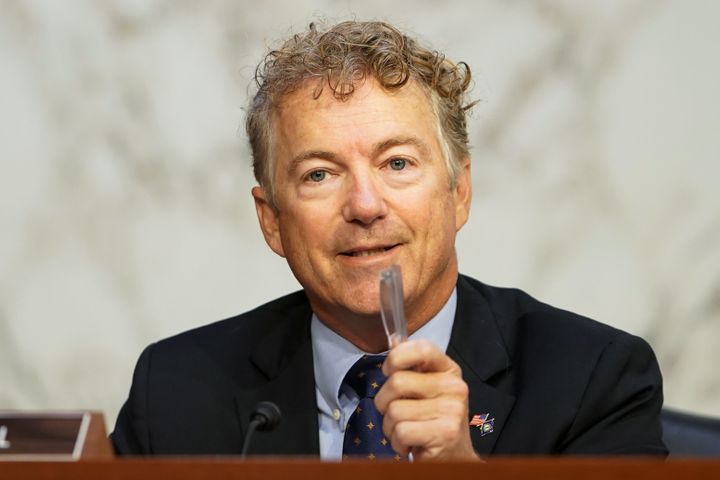 Kentucky Sen. Rand Paul, one of the Republican Party’s staunchest devotees to the lie that the 2020 election was “stolen” from former President Donald Trump, continued to spread such claims this week — and in the process delivered one of the more honest statements about voter fraud and stolen elections any Republican lawmaker has made this year.

“How to steal an election,” Paul tweeted Monday night, before quoting an article from The American Conservative. “‘Seeding an area heavy with potential Democratic votes with as many absentee ballots as possible, targeting and convincing potential voters to complete them in a legally valid way, and then harvesting and counting the results.’”

How to steal an election: “Seeding an area heavy with potential Democratic votes with as many absentee ballots as possible, targeting and convincing potential voters to complete them in a legally valid way, and then harvesting and counting the results.”https://t.co/LwE3MdeWeG

As Paul’s tweet helpfully noted, all of these efforts were perfectly legitimate: The phrase “legally valid” is prominently featured in the sentence he chose to excerpt. Routine audits of Wisconsin’s elections, meanwhile, produced no evidence of fraud or irregularities in last year’s contest.

But proof of fraud is not the point of this claim or any other Paul, Trump and various Republicans have made over the last year — or, really, over the last decade. As Paul’s tweet stated more clearly than Republicans typically do, their claims about voter fraud, stolen elections and “election integrity” are merely euphemisms for the GOP’s actual belief that “people voting for Democrats” is enough to render an election entirely illegitimate. A Democratic victory is, by definition, the result of theft.

This is the core belief of the modern Republican Party, which reacted to the 2020 election by spreading lies about election fraud, attempting to overturn Trump’s loss, and fomenting a riotous insurrection at the U.S. Capitol, all because Trump lost what numerous Republican, Democratic and independent election observers have repeatedly called the safest, most secure and most audited election in American history. When that didn’t achieve their desired result, they institutionalized the aims of the insurrection, passing more than 30 new laws to restrict voting rights and asserting new levels of partisan control over local and state election systems ahead of the next presidential contest.

These efforts have all primarily targeted voters that tend to favor Democrats ― Black people, Latinos, Native Americans, college students, people with disabilities, and anyone who lives in cities or other localities that typically vote blue. And they are all obviously rooted in Republican anger that too many voters voted for Democrats, not that anyone might’ve cast ballots illegally.

In Georgia, Republicans added stricter voter ID requirements to absentee ballots, tightening access to a vote-by-mail program the GOP created more than a decade ago in a way they never felt was necessary until Biden became the first Democrat to win the state since 1980. In Arizona, the GOP-controlled legislature made similar changes to absentee ballot laws they originally enacted, after Biden notched Democrats’ first presidential victory there in more than two decades. In Texas — where it’s already harder to vote than in most other states — they barred drive-through voting and imposed other new voting restrictions in an effort to ward off potential Democratic victories in the near future.

Republicans and their conservative allies have also targeted election officials and offices in key states, purging or stripping power from those who made it too easy to vote or refused to go along with Trump’s election gambit, part of a broader effort to bend the 2024 election to their liking ― or try to overturn the result if they need to. In Wisconsin, the subject of Paul’s tweet, Republicans have sought to undermine the electoral system they just reformed less than a decade ago and are attempting to forcibly replace the state’s top elections official.

None of this will prevent the sort of nefarious behavior their countless utterances of “voter fraud” are meant to evoke, both because that sort of behavior is exceptionally rare in American politics and because actual voter fraud has never been the target of their ire. But neither will insisting to Republicans, or to conservative voters who believe their claims, that voter fraud doesn’t actually occur succeed in thwarting the GOP’s attempts to suppress votes and subvert American democracy.

It’s painfully obvious what Republicans are trying to do, and why. Paul was simply, if perhaps inadvertently, candid about it: To the modern GOP and an increasingly large share of its conservative base, there’s no such thing as a “legally valid” vote for a Democrat, and no such thing as a legitimate election if a Democrat wins it.