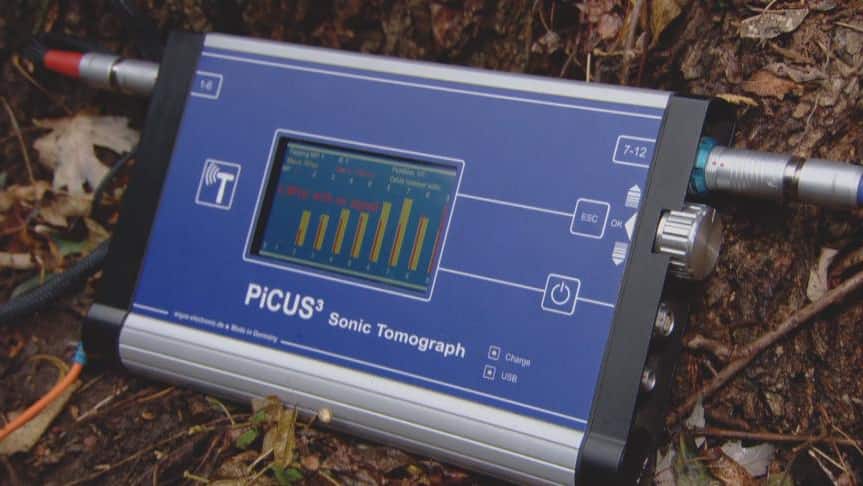 Philip Van Wassenaer crouches down to pound nails into the base of a 25-metre-tall tree in Scarborough, Ont.

He isn’t tapping for sap — the nails around the base of this tree will help him diagnose its health.

Once the sonic tomograph sensors are attached to the nails, Van Wassenaer gently taps each one, sending sound waves through the trunk. The device measures how quickly the sound travels, and a small screen shows different colours for different speeds, essentially showing what the tree looks like on the inside and exposing any rot.

“It may be attributable to climate change, but we are getting asked more often to do a deeper look at the risk of urban trees,” said Van Wassenaer, a consulting arborist for 30 years.

Arborist Philip Van Wassenaer shows how a sonic tomograph provides an inside look at the health of a tree. 2:38

“We see climate change happening. It’s not somewhere else, it’s here. But that doesn’t necessarily mean that all our trees have all of a sudden become a problem.”

Van Wassenaer says there needs to be a more balanced approach: trees need to be saved whenever possible because they absorb greenhouse gases, which helps mitigate climate change and prevent soil erosion, which contributes to mudslides.

“Some trees absolutely should be removed, many trees can be made smaller. They could be cabled. There are so many conservation techniques.”

The devastating effects of climate change and extreme weather are no longer theoretical, and experts say tree maintenance is just one of several preventative measures people and municipalities should take to prepare for more intense and frequent storms.

Cheryl Evans, director of flood and wildfire resilience at the University of Waterloo’s Intact Centre on Climate Adaptation, said “every location in the country has slightly different risks that are present now and that will continue to increase.”

Residents should regularly inspect trees around their properties and do preventive maintenance, like pruning, when needed.

“As the winters warm, we’re gonna get a lot more freezing rain as opposed to snow, so we’re gonna see a lot more burden on trees — so check how close the trees are to your hydro lines.”

Other regions will have hotter summers and drier conditions, which contributed to the wildfires that destroyed the hamlet of Lytton, B.C., this past June. Meanwhile, in the fall, atmospheric rivers deluged British Columbia’s Interior, causing flooding and mudslides in place like Princeton, Agassiz and Merritt.

“For most people, floods, high heat and freezing rain — those are going to be some of the key impacts,” said Evans.

She said some preparations are as easy as a trip to the hardware store.

“Make sure your eavestroughs are clear and your downspouts allow water to flow away from your foundation. Put valuable things or potentially toxic items up on a basement shelf, so they don’t get damaged or contaminate water.”

Evans says national building codes are being updated and may require builders to use such things as additional nails for roof shingles and hurricane straps in high-risk areas or install backflow valves and sump pumps to prevent sewer back-ups in homes.

Just as homeowners may want to do a risk assessment and preventative maintenance on their properties, cities across the country are preparing for climate change — just on a larger scale.

Glenn McGillivray, managing director of the Institute for Catastrophic Loss Reduction at Western University in London, Ont., says municipalities are being called on to prepare their infrastructure for more common extreme weather events.

“The beauty of engineering is that all we have to do is say, ‘Let’s build this to a higher standard,’ and the engineers can go to work and determine what that standard should be,” said McGillivray.

But he says tools are needed to better understand where the risk is — better flood mapping, for example, and better forest fire risk hazard mapping.

“We know what kind of things can be done to make our infrastructure more resilient,” said McGillivray. “It’s going to be costly, but inaction is going to be far costlier.”

Lou Di Gironimo, general manager of Toronto Water, says storms have become more severe over the past few decades and the city has invested billions of dollars in flood mitigation programs.

After storms in 2006 and 2013, the city’s basement flooding program studied 67 different sewer shed areas at risk of back-up, and prioritized problem spots for $2.1 billion in improvements.

“We’re hardening those locations, giving them greater protection and greater resiliency, so they are not damaged during storm events,” said Di Gironimo.

What Toronto is doing on a local level, the federal government is doing nationally — an all-encompassing national adaptation strategy for climate change is underway.

McGillivray, from the Institute for Catastrophic Loss Reduction, says it will map parts of the country for possible impacts on agriculture, transportation and supply chains from extreme weather events.

“This document is absolutely critical for climate change adaptation and risk reduction,” he says of the plan, which is set to be released in the fall of 2022.