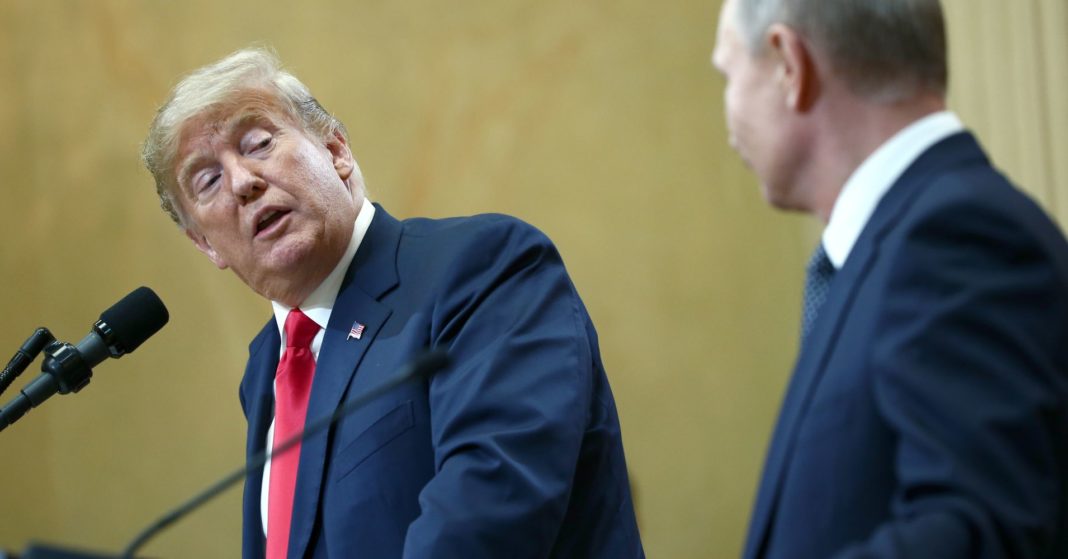 President Donald Trump vowed Thursday that if his dealings with Russian leader Vladimir Putin don’t “work out, I’ll be the worst enemy he’s ever had.”

Trump made the statement during an interview at the White House with CNBC’s Joe Kernen that will air in full Friday at 6 a.m. ET on “Squawk Box.”

In the same interview, Trump blasted his predecessor, President Barack Obama, for having been a “total patsy” for Russia — while claiming he has been “far tougher on Russia than any president in many, many years.”

But Trump also said he valued the opportunity to improve the United States’ relationship to Russia, even after American intelligence agencies have said that Russia repeatedly tried to interfere in the 2016 U.S. presidential election.

The president’s comments came three days after he met with Putin in Helsinki, where his comments at a joint press conference with the Russian strongman drew widespread criticism both from Democrats and from his fellow Republicans.

Under questioning from reporters, Trump refused to criticize Putin for the election meddling, and suggested that it was an open question as to whether the former KGB spy Putin’s denials of such hostile action were as credible as the findings by American intelligence services.

The president’s interview with CNBC also came on the heels of a New York Times report that said Trump, two weeks before his inauguration in January 2017, had been shown extensive evidence that Putin personally ordered interference in the 2016 U.S. elections.

In his interview Thursday, Trump ticked off several actions that he said rebut any argument that he is under Putin’s thumb.

Those actions include his urging German leader Angela Merkel last week to withdraw support for a new gas pipeline that would bring gas from Russia to Germany across the Baltic Sea. Trump had called Germany “a captive of Russia” because its reliance on Russian energy sources.

“I said, wait a minute, we’re supposed to be protecting you from Russia and you’re paying them billions of dollars. What’s that all about?,” Trump told CNBC on Thursday.

“Now, you think that’s a positive for Russia? I’m talking them [Germany] out of things that they [Russia] were given billions of dollars. It’s ridiculous, by the way, that that’s happening,” the president added.

Trump also urged people to “look at the sanctions I put on” Russia,” referring to several different sets of financial sanctions imposed by his administration on Russian oligarchs, companies and government officials.

“Look at the diplomats I threw out,” Trump added, referring to the U.S.’s expulsion in March of 60 Russian diplomats who had been identified as intelligence officials after the poisoning of an ex-Russian spy in Britain.

“Look at all the things that I have done,” the president said.

In April, The Washington Post, citing a senior administration official, reported that Trump was angry over the number of diplomats that were expelled in March.

Trump then turned his ire toward Obama’s Russia policies.

“Obama didn’t do it,” Trump said, comparing his efforts to his predecessor’s. “Obama was a patsy for Russia. A total patsy.”

Despite those claims, under Obama, the U.S. issued several sanctions against Russia following its annexation of Crimea in 2014. Obama and other international allies also booted Russia from the G-8 that year to retaliate against Putin for the Crimea crisis.

Trump on Thursday then mentioned an incident in March 2012, when Obama, apparently unaware that his words were being caught by a live microphone, told then-Russian President Dmitri Medvedev that Obama would “have more flexibility” after the American presidential election in November 2012 to negotiate with Russia’s incoming president, Putin, on the issue of missile defense.