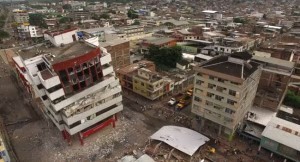 A major earthquake struck off the coast of Guatemala on Thursday, damaging buildings and downing trees.

There were, however, no reports of casualties, even as the quake caused powerful tremors in neighbouring El Salvador.

The earthquake, measured at a magnitude of 6.8 by the U.S. Geological Survey, struck 38 kilometres (24 miles) southwest of Puerto San Jose at a depth of 46.8 kilometres.

Antigua’s fire service told local radio that the quake had damaged houses, bringing down some roofs, but confirmed that no casualties had been reported.