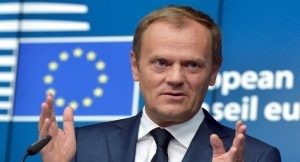 European leaders meeting in Brussels gave their backing to increased defence cooperation on Thursday as Britain, a long-time opponent of the move, prepared its exit from the bloc.

Speaking at a news conference after a first meeting of the leaders, President of the European Council, Donald Tusk told journalists that the development was “historic”.

Quizzed about an earlier reference to John Lennon’s “Imagine”, Tusk said he refused to see a possible reversal of Britain’s decision to leave the EU as an illusion.

“If you had my experience from my part of Europe, you’d know that miracles do happen and some of my political dreams have come true and this is maybe the best part of politics that everything, in fact, is possible,” he said.

The head of the EU executive Jean-Claude Juncker also said that a joint fund for research and development would help iron out inefficiencies in European defence spending.