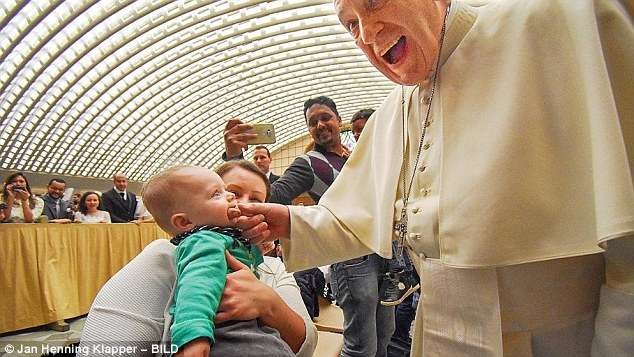 Seven months old baby shocked everyone when he bit the leader of the Roman Catholic church.

Pope Francis was pleasantly surprised when he tried to touch a young boy.

Daily Mail reports that seven months old Karl Klapper took the Pontiff’s hand and proceeded to chew on it.

The incident took place during a blessing ceremony in the Vatican. Pope Francis reacted with a smile.

Afterward, the baby’s parents, Jan Henning and Kerstin from Lüdenscheid in Germany spoke with the media.

His father said: “The Holy Father made light of it.

“He wanted to know how old our little one was and what he was called. He was a really nice man.”

The incident has been dubbed the ‘nibble attack’ by the German media.

This is not the Pontiff’s has been pleasantly surprised by kids.

In 2013, a young boy stole the show by refusing to leave the stage during the Pope’s speech.

As seen in the video below, the Pontiff clearly didn’t mind the interruption.

He got another surprise in 2015 when he spotted a baby dressed exactly like him, papal robes and all.

Pope Francis reacted by laughing. This happens during a visit to Philadelphia.