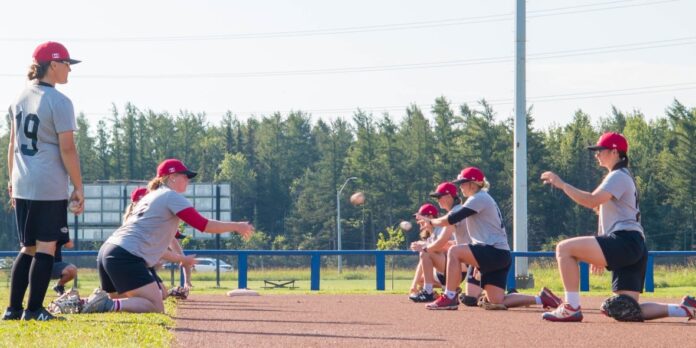 It’s the first international competition for both sides since the 2019 COPABE Women’s Pan-American Championships in Mexico, where the Americans won gold. Both Canada and USA are in the top five of the world rankings.

Players are looking for wins on and off the field, as they also hope to bring more awareness to women’s baseball.

“When you’re younger, it’s like, ‘Oh, you’re switching to softball, right?’ Like, ‘Girls play softball, right?’ No. We’re here to show that we play baseball,” said Zoe Hicks, who’s at third base for her first time with the Canadian national team, under manager Ashley Stephenson, a former hockey and baseball player from Ontario.

Hicks grew up playing softball and competed on a college team, but during a trip home one summer, she ended up on the senior boys’ team from her old high school.

“From there, I just fell in love with it,” Hicks said about baseball.

She was recruited to play with Team Manitoba before making the national women’s team.

Hicks said it’s important to show younger girls that they can choose to play baseball.

“I think it’s big to be representations of what little girls want to be, and show them that this is possible and this is an opportunity that is going to be afforded to them.”

During a practice the morning before the first game Thursday, Malaika Underwood shouted encouragements from first base to her fellow American teammates.

At 41, Underwood is the oldest player on the U.S. team and has been playing with the national team since 2006.

“When I was growing up in San Diego, I thought I was the only girl in the world playing. I played in Little League,” Underwood said. “I fought to play in high school. I gave up baseball — at least I thought I did — when I went to college,”

Without a women’s baseball team in college, she decided to play volleyball instead.

It wasn’t until 2006, years after she graduated college, that Underwood stumbled upon open tryouts for the USA Baseball women’s national team, which  was only created two years earlier, in 2004.

She said that in the years since she first made the national team, the talent level and the opportunities for girls and women to play baseball have continued to grow. But still, she said, barriers remain.

“I can’t tell you how many times when I say that I play baseball, that people correct me and say, ‘Oh, you mean softball?'” Underwood added. “The truth is, I know what game I play, and it is baseball. There’s still this social expectation that boys play baseball and girls play softball, so we have a lot of work to do in changing that.”

‘I stick to baseball’

Her teammate, Alana Martinez, the youngest player on the American squad at just age 16, agreed.

“I originally got put into softball when I first started, and I didn’t like it. The competition just wasn’t for me. I wanted to play baseball,” Martinez said.

“Still to this day, I get pushed. But I don’t feed into it. I just keep working and I stick to baseball.”

Back in her home state of Florida, Martinez is the only woman on her travel baseball team because there aren’t any all-female teams. It’s something she hopes to see change in the years to come.

Underwood said there are more opportunities now than 15 years ago, “but I think we still have a lot of work to do in terms of breaking open those opportunities, both at a grassroots level and at a higher level.”

She said more resources for women to play baseball at all ages — especially in high school and college — will be important to grow the sport, as will more media coverage.

“The more that we can cover the game at the highest level … that’s important not only to inspire girls who might want to play, but also to break that mould so people know that women are playing baseball at a very high level.”

The series between the North American rivals runs until Monday, with games every day at the Baseball Central ball diamonds in Thunder Bay.