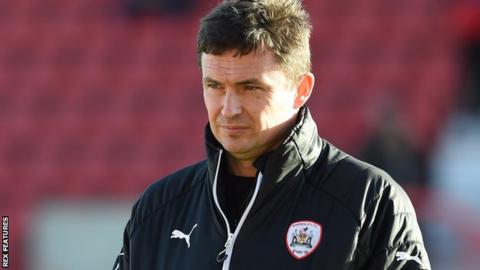 It has been quite the week for Paul Heckingbottom. On Monday morning he was taking training at Barnsley, by Thursday he has found himself preparing for Leeds’ trip to Sheffield United.

“The first couple of days have been frantic and hectic, as you can imagine!” he Said ahead of the Yorkshire derby at Bramall Lane on Saturdayl. “But I’m settling down now and I’m sure once Saturday is here it will be like normal, getting back into the routine and trying to win games.

“It all happened very quickly. I knew something was happening on Monday morning before I was with the [Barnsley] players and I was trying to find things out.

“I couldn’t, though, so I just got on with the job and delivered training as we would, then tried to see what was happening on Monday afternoon. I didn’t get permission to speak to Leeds until about 7pm and from then on it was really frantic.”

Leeds only sacked Thomas Christiansen last Sunday night after a dreadful run of form which had seen the club drift from play-off contention to 10th in the table, seven points off the top six.

But owner Andrea Radrizzani, who clearly had his eye on the man up the road at Barnsley, acted quickly, and Heckingbottom was taking charge of training at Leeds by Tuesday.

“The speed in which it was done was obviously flattering and gives me great confidence,” added the 40-year-old. “They showed great belief in me and that was nice.

“When we’re signing players we put so much effort into researching them and that should be the same for the manager. They have to fit with the ethos of the club and whether they fit into the process and will instil the right values.

“After speaking to the owners and decision-makers at Leeds I felt we were really aligned. I was excited when they were speaking and highlighted my role and what they knew about me, and likewise I must have come across in a way they expected in terms of how I see things working and what I’d want to do. It all fitted nicely and that was one of the reasons it was all so quick.”

Heckingbottom was born in Barnsley, played for the club and then took them up from League One as manager. He had also only signed a new contract at Oakwell last week so, understandably, the move caused a bit of a furore.

Heckingbottom, however, says that the contract had been agreed a long time ago and that the announcement was delayed further due to the tragic passing of club owner Patrick Cryne last month, making it a non-issue.

“It was initially said to me that I’d be signing a new deal last March,” Heckingbottom said. “But it was difficult to get it finalised and when it did there was the really sad news about Patrick, who sadly passed away a week later. So out of respect we delayed the announcement.

“But the timing of it all has been blown way out of proportion. It could have been done last April but it wasn’t, so the only two parties who suffered were me, because I didn’t get paid a rise, and Leeds, who had to pay more compensation to Barnsley. That can’t be fallen back on because it was never an issue.

“It was sad in a way but not a wrench [to leave]. Part of the decision when you’re signing to become a head coach of a football club is that you’re going to be leaving at some point. You’re either going to get sacked or move to another job.

“If I’m honest while playing, coaching and managing there have been opportunities to leave and I’ve never really explored them because I haven’t wanted to, but this was too big an opportunity to turn down. I didn’t ask anyone, I just came and wanted to get it done, which shows that I know it’s the right thing. I could have stayed doing what I was doing, or come to work for a massive club and test myself in a totally different environment.

“Part and parcel of being a manager is testing yourself and pushing yourself. When these decisions come along you have to go with your instinct, which is what I’ve done. I love what I do, so why not do it at a club like this?”

It’s not going to be an easy start for Heckingbottom at Leeds. Their next six games are all against other sides in the top half of the table and it’s a run that will likely make or break their season.

He will, however, undoubtedly have half an eye on April 21 when Leeds host Barnsley at Elland Road – the fixture that has, in many ways, defined his life in the game.

“I used to get a lot of stick off of [the Leeds fans]! But now it’s shifted and I imagine the Barnsley fans will give me a lot of stick,” he said. “I used to get kicked to lumps every week on the field behind my mum’s house. It was always Leeds vs Barnsley. They were older than us but not as good as us, so they had to kick us! Then you get it thrown down your throat how big a club Leeds are.

“But no one has to tell me about this club, and I know I’ve made some of those lads who used to kick me really happy. So that’s been nice as well.”

First it’s Bramall Lane on Saturday, where he’ll be coming up against another local Yorkshire lad in Chris Wilder.

“It’s a good one for me and Chris because we were both local lads who grew up watching and playing in Yorkshire derbies,” he said. “It’s an ideal start and one we’re really looking forward to. I’ll be making the players aware that there’s a lot riding on it.

“When you’re playing a team above you the ultimate goal is to close that gap, and that starts on Saturday.”