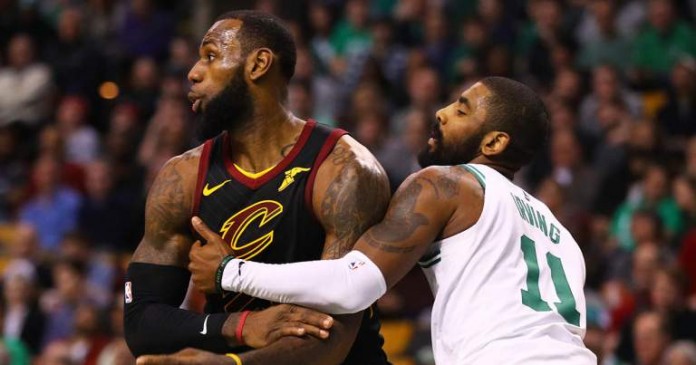 The Cleveland Cavaliers avoided another painful loss and a three-game skid when LeBron James’ overtime buzzer beater handed them a 140-138 win over Minnesota early on Thursday morning. It was only their seventh win in the last 20 games since Christmas. The Cavs’ next game is against the Atlanta Hawks, who are bottom of the Southeast Division. But, you never know with these Cavs – the last time they played the team at the bottom of that division, they came up empty.

Then on Sunday, they face the Boston Celtics, one of their direct rivals for the number-one playoff spot in the Eastern Conference. The Cavaliers started out as the better of the two teams, but the tide turned.

The Cleveland Cavaliers had the same schedule as the Boston Celtics in the first two games of the season, and both faced the same teams. Boston traveled to Cleveland on opening night, then returned home to face the Milwaukee Bucks; they lost both games. Kyrie Irving suffered the dual disappointment of losing to LeBron James and the Cavaliers he just walked away from, and a loss in front of his new home fans to the Bucks.

For LeBron James and the Cavaliers, the season couldn’t have had a better beginning: the upstart, who swanned away from the team, put in his place in front of the fans he’d spurned for Boston. And they followed that up with a handsome road win over the Milwaukee team that had just returned triumphantly from TD Garden with a second win in the same year.

The Cavaliers and the Celtics swapped places at the top two spots in the Eastern Conference for a while, until the Celtics edged slightly ahead … until that Christmas Day game. The Cavaliers arrived in Oakland for the festive fixture with a respectable 24-9 record; on the other side, the Celtics welcomed the Washington Wizards to TD Garden, also carrying nine losses but had won 27. They both ended the day with the 10th loss – the Cavaliers fell 99-92 to the Warriors, while the Wizards handed the Celtics a 111-103 defeat.

From that point on, both teams went in different directions.

For Cleveland, it was the start of an ugly run during which they would win just seven games in the next twenty, with loads of stories and situations in-between. For Boston, the home loss sparked a reaction not unlike the one that followed that first home loss of the season; this time, the Celtics went on a seven-game streak. And the streaking Celts crossed paths with the spiraling Cavs in that sequence.

Boston had won three games on the bounce following the Wizards’ visit, including a one-point victory over the Houston Rockets. Cleveland were the fourth team they faced and Boston exacted their revenge for the opening-day loss with a 102-88 win. Several things have gone wrong with the Cavs since the Christmas Day loss, the most crucial being the two-tier internal strife tearing the team apart.

Firstly, the strife that exists between the players. Basketball is a team game; the offense flows better and teams do better when teammates share the ball, which is what makes San Antonio the great franchise it is, the model franchise. The Cavs have stopped sharing the ball, and Isaiah Thomas was clear about that following the embarrassing loss to Orlando. He told ESPN’s Dave McMenamin:

“Right now, when we hit adversity, we go our separate ways, and that’s just how I feel, and it looks like that as well. Guys start to go one-on-one on offense, and the defense is every man for himself.”

In that statement, the former Celtics guard indicted the Cavaliers and accused his teammates of abandoning two of the basic premises of basketball: team offense and defense. Successful teams have teammates that offer both weak-side and slide-over help in defense. When teams go ‘every man for himself’ it leaves the team open. That is why the Cavs have been suffering heavy losses. The Cavs have been outscored 5,806 to 5,841 through 53 games despite holding a ‘healthy’ 31-22 record.

Then there is the reported strife between star player LeBron James and the Cavs front office. What started like a small trickle became a full-blown crisis following the blow-out loss to Raptors in Toronto, and it has gone downhill ever since.

The injuries also haven’t helped. The arrival of Isaiah Thomas was supposed to temper the ill-effects of the Kyrie Irving departure, but Thomas arrived injured, couldn’t participate in training camp and had to start learning to play with his teammates halfway into the season. His injury hasn’t been the only one: Iman Shumpert and lately Kevin Love have also been injured, affecting team rhythm.

The Celtics, on the other hand, have found new heroes despite the long-term injury to Gordon Hayward. The likes of Marcus Smart, Terry Rozier and Jaylen Brown have stepped up and rookie forward Jayson Tatum has been a revelation. The Celtics are meshing more as a team, while the Cavaliers are pulling apart. Both teams sit atop their respective divisions, but Boston are still top of the Eastern Conference, while the Cavs have slipped into third place, seven games behind the Celtics and trailing the second-placed Raptors by six games.

The two teams will meet in the third of a four-game regular-season series on Sunday. Both teams have won one game each; this tie will either underline how far the Cavs have fallen or give an insight into their battle to regain their lost position in the East.