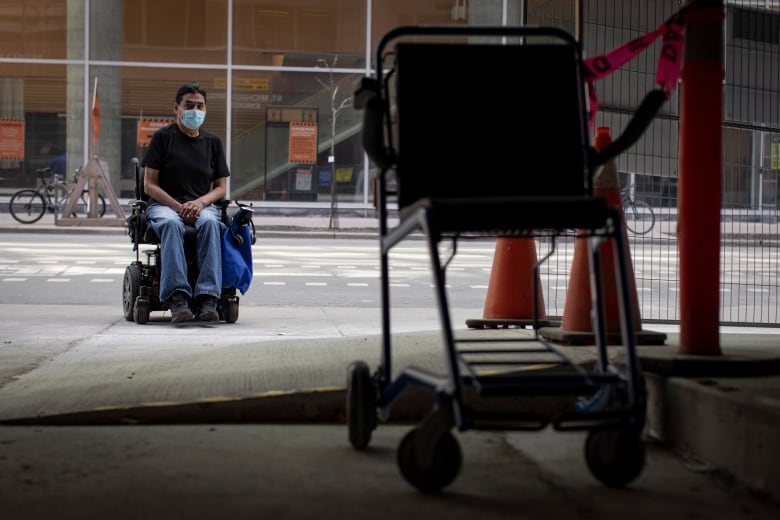 It felt like –7 C outside when Charles Hussin found himself kicked out of a downtown Toronto hospital’s emergency department in January and left on the sidewalk in a wheelchair he couldn’t operate.

Hussin, 50, said he was removed from St. Michael’s Hospital by a security guard after a doctor wanted him discharged because he was swearing about a nearly six-hour wait in the ER.

Hussin, who is partially paralyzed after spinal cord surgery, said a guard placed him in a wheelchair and took him outside. In a complaint filed with the hospital, Hussin says when he told the guard he couldn’t walk, the response was, “Well, that’s your problem now.”

“That made me feel like I wasn’t worthy,” Hussin told CBC News. “I could never treat anyone like that under any circumstance.”

The incident is the latest in a spate of cases in Canada where Indigenous people have faced discrimination from health-care staff and law enforcement and security officers. In one case, that of Joyce Echaquan, a coroner’s inquest examining her treatment at a Quebec hospital ended Wednesday.

Hussin filed a formal complaint on May 5 with St. Michael’s Hospital. In it, he says he was mistreated and wants the security guard fired, the nurse and doctor involved reprimanded, an apology and compensation.

“For them just to leave me out there, I couldn’t believe they did that,” he said.

Hussin said he believes being Indigenous — he is Ojibway and a member of the Gull Bay First Nation — factored into his treatment. The hospital settled a lawsuit with his brother in 2011 after allegations of security staff beating and leaving him outside.

Unity Health Toronto, which operates the hospital, has vowed to investigate Hussin’s matter. While it wouldn’t comment on his case, it issued a statement acknowledging anti-Indigenous racism is common in hospitals across Canada.

“The fear and mistrust that Indigenous peoples have of institutions that should be seen as places of safety and care is, sadly, valid,” it said in a statement to CBC News.

Anti-Indigenous racism, it continued, is the norm rather than the exception during hospital visits, and it manifests “both through individual actions and as the result of ongoing systemic racism and the effects of colonization.”

On Jan. 8, Hussin called 911 because he felt faint and was experiencing pain near his heart. He was still recovering from his surgery eight months prior.

He was taken on a stretcher, and his motorized wheelchair was left behind. He said he arrived at the ER at about 3 p.m. and waited on a gurney in a hallway.

After more than five hours of waiting without seeing a doctor, Hussin said he started to get agitated and, the complaint says, asked a worker, “What the f–k is going on here? Why am I just sitting here?”

Hussin said he wasn’t swearing at anyone in particular, wasn’t yelling and that when the guard approached him, he swore again, but just in the context of the long wait.

A nurse became involved and then a doctor, but instead of assessing Hussin, the doctor told security to “discharge him,” the complaint says.

Hussin said about 30 minutes before he was kicked out, another man, who he believes is white, was also swearing at staff, but security allowed him to stay.

“I have experienced a little bit of racism, but it was something that I could easily brush off. This, especially in a medical emergency, I couldn’t believe it,” he said.

Video shows struggle to get to apartment unit

Hussin filed the complaint four months after the incident because he was waiting to access security footage that showed him struggling inside his apartment building.

He said he waited for about 45 minutes outside the hospital before flagging down a taxi driver, who took him home and helped him into his apartment lobby.

Surveillance video from the lobby, timestamped at 9:50 p.m., shows Hussin sliding along a bench, then gingerly walking and using the walls for support to slowly make his way into the elevator. He said that’s the first time he’d taken steps on his own since his surgery.

A security camera in Charles Hussin’s apartment building captured the moments he struggled to get into the elevator after being dropped off by a taxi. 1:30

“It was really, really difficult,” he said. “I was afraid of falling and injuring my back again.”

The next day, he took public transit to Mount Sinai Hospital, where he was happy with the care and underwent tests, according to records shared with CBC News. A doctor at Sanctuary Toronto’s health clinic prescribed antibiotics for an infection.

Doug Johnson Hatlem, a street pastor at Sanctuary, is advocating for Hussin and helped him file the complaint.

“He’s in a wheelchair. He’s paralyzed. He’s coming here for help. And so this is just unconscionable,” he told CBC News.

Johnson Hatlem said he was surprised Hussin was kicked out; he’s known him for more than a decade and describes him as mild-mannered. He said he was emotional while watching the video from Hussin’s apartment.

“What if he falls? [I was] imagining how bad that would be and how long he’d have to wait there on the floor,” he said.

Johnson Hatlem said helping Hussin file the complaint felt like déjà vu. In 2009, he helped Hussin’s brother, Cliff, through a similar process after Cliff complained of being beaten and left outside by two St. Mike’s security guards who were subsequently fired.

The hospital apologized and settled a lawsuit filed by Cliff and his girlfriend at the time.

Johnson Hatlem said it appears that no lessons were learned and no real change was made.

Unity Health Toronto says it takes allegations of racism seriously and is ramping up efforts to eliminate anti-Indigenous racism.

“This work is happening through guidance from Indigenous physicians, staff and community partners, cultural safety training and the incorporation [of] culturally appropriate changes to our services,” its statement read.

“We recognize the need to have meaningful processes in place so there is accountability when racist actions occur.”

Hussin and Johnson Hatlem received an email in response to the complaint from a patient relations specialist who apologized to Hussin and said his concerns will be passed on to security and emergency department leadership.

The hospital says it addresses complaints within 30 days or updates the complainant if the process takes longer. If a complainant is unhappy with the outcome, they can seek help from Ontario’s patient ombudsman.

‘It is happening … across every city in our country’

Discrimination against Indigenous people in Canada’s health-care system is rampant and leads to a lack of care and poor outcomes, Indigenous health and legal experts say.

A four-year research project published in 2018 called Aboriginal Health Counts Toronto found that more than one in four Indigenous adults in Toronto reported being treated unfairly by health-care providers because of their Indigenous identity. The same number of participants said they had unmet health needs in 2017.

The research also found that 71 per cent of Indigenous adults in the city experienced racism that stopped or delayed them from returning to get health care.

Cheryllee Bourgeois, a Métis midwife with Seventh Generation Midwives Toronto who worked on the project, says a vicious cycle is established when people don’t receive adequate health care due to discrimination.

“People will avoid [getting] health care out of self-preservation, out of protection for themselves, out of fear,” she said.

They only get help after the issue has progressed from being easily treated or even prevented to an urgent state, she said.

Bourgeois said the health-care barriers faced by Indigenous people are rooted in “the founding of our country and within the colonial systems that exist,” and addressing that requires fundamental institutional change, which is difficult.

“It is happening in every hospital, across every city in our country. And we need to be willing to look at that,” she said.

Caitlyn Kasper, a lawyer with Aboriginal Legal Services in Toronto and a member of the Chippewas of Georgina Island First Nation, said the centre is seeing more people seek help about mistreatment in health care.

She said she believes part of the reason people are coming forward may be due to the inquest into the death of Joyce Echaquan, who died last year after live streaming abusive remarks made by hospital staff in Quebec.

“It’s sad that it takes the death of somebody else for someone to say, ‘Hey, I’m not alone in this. I’ve experienced this, too.’ But it does help in people being educated and saying I’m not going to stand for it anymore,” Kasper said.

The number of complaints to Ontario’s patient ombudsman against hospitals, long-term care homes and other settings has been rising each year, but the office doesn’t track the race of the person filing the complaint.

Ombudsman Craig Thompson acknowledges the omission is a barrier and said he’s working with Indigenous partners to change that by the fall.

The office also recently hired an early resolution specialist to help facilitate complaints, build bridges with the Indigenous community and create a safe space within the office, so that “we can do a proper job not only taking the complaint, but also finding resolutions that are appropriate for that community,” Thompson said.

Hussin said that even though he’ll never seek help from St. Michael’s Hospital again, he wants it to acknowledge the way he was treated was wrong.

“I wouldn’t feel good coming back here,” he said from across the street.