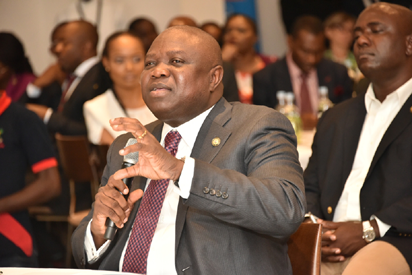 While speaking at the recent sensitization workshop on 2017 Water Technology and Environmental Control Exhibition and Conference (WATEC), Lagos State Governor, Akinwunmi Ambode, said out of a massive population of 22million, only 600,000 Lagos residents are up to date in paying their taxes, and that such was not helpful to scale up provision of infrastructure and other amenities for the people.

According to the governor, the government has identified the need for residents to adopt a willful approach to the payment of taxes as a means of addressing fundamental challenges confronting the State and accelerating development in all sectors and sections.

Responding to a suggestion from one of the participants at the workshop that the State Government should complete the ongoing shoreline protection particularly in the Lekki and Ajah axis as one of the ways to mitigate the impact of torrential rainfalls which caused flooding in the axis last week, Governor Ambode said in as much as government was willing to do such, it was being inhibited by its limited resources.

He said: ?Talking about protecting our shoreline, I want to tell you something. The ecological fund that someone talked about does not exist because the previous government, due to political consideration, never gave Lagos anything and protecting the shoreline runs into billions.

?Even doing those groins not to allow the water to break cost a lot of money and then with frozen taxes in the last eight to ten years, there has not been any increase in taxes unlike in the United Kingdom for instance where any young person living there knows that once you start working at the age of 18, your civic obligation is that you must pay tax but here nobody takes it as their business that the new road I am using I need to pay something and so they only pay tax when they are inside the real tax net that is you are paying pay as you earn.

?The number of people paying taxes in Lagos is less than 600,000 people and we are 22million and then 67 percent of the people living in Lagos are below the age of 35 and even the retirees, how much are they paying? They are on pension. So, you have to go through your nose and you want to be as compassionate as possible that in a recession, you don?t overtax people.?

According to him, it was time for a convergence between civic obligations and the ability of government to build trust by using taxes of citizens judiciously, just assured that his administration, within the available resources, would continue to invest in infrastructure and deliver good governance to make life comfortable and easier for the people.

?What I am saying is that there must be a convergence between civic obligations and the ability of government to build trust and be able to tell people that you know what, the little that you are giving me, I will use it judiciously. When I use it judiciously and you see it overtime, trust me, if you pay more, I will do more.

?Obviously, the vision is there, the plan is there but again it is not driven by anything than the citizens themselves and the area that we need improvement is for citizens to have trust or confidence that the taxes they are paying will be returned back in terms of infrastructure but I can tell you that I am also concerned; I see a lot of things I don?t like but I am inhibited by the amount of money I have,? Governor Ambode said.