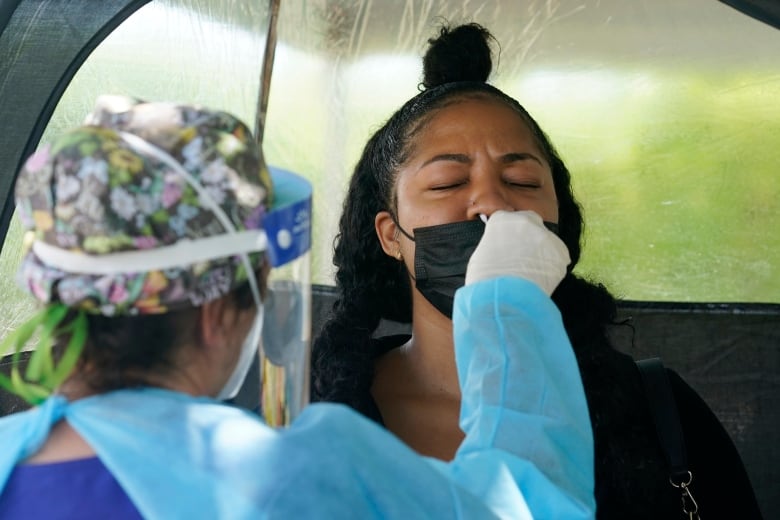 The sources — who spoke on the condition they not be named because they aren’t authorized to speak on the record — said the government is only dropping the testing requirement for Canadians and permanent residents for trips lasting less than 72 hours.

Molecular tests, like the polymerase chain reaction (PCR) test, will still be required for trips longer than 72 hours.

The change is expected to come into effect at the end of the month as cross-border shopping picks up before the holidays.

The news was first reported by La Presse.

The federal government has been facing mounting pressure to drop the rule requiring travellers entering Canada to show proof of a negative COVID-19 test taken within 72 hours of their departing flight or planned arrival at the land border.

People have reported shelling out between $150 and $300 for a test, depending on their point of departure. Many have complained that it can take 24 hours — sometimes longer — for travellers to get their results.

The U.S. government has taken a different approach.

Fully vaccinated air travellers entering that country must show proof of a negative COVID-19 test, but travellers can opt for a rapid antigen test — which costs as little as $20 and provides quick results.

The government is expected to make an official announcement on Friday.

U.S. congressman Blaine Higgins, whose district includes Buffalo and Niagara Falls, called on the Canadian and U.S. federal governments to come up with a consistent approach for travellers on both sides of the border.

“The fractured approach to border management by both the U.S. and Canadian governments is contributing to public confusion, anger and frankly, it makes no sense,” Higgins said in a media statement.

Higgins was one of about a dozen members of the House of Representatives who took part in a meeting with Prime Minister Justin Trudeau on Wednesday.

According to Higgins, the Canadian government said during the meeting that it will introduce a multi-phase plan to ease testing measures at the border.

The Prime Minister’s Office did not confirm those details.

On Tuesday, Health Minister Jean-Yves Duclos would only say an announcement is coming “soon.”

Business groups have called for a more streamlined approach to traffic between the two countries.

“The leaders of Canada, the United States and Mexico should prioritize removing friction from our mutual borders,” said Perrin Beatty, president and CEO of the Canadian Chamber of Commerce.

“Getting rid of unnecessary and outdated travel rules will help Canada’s businesses get back to work – and compete.”

“The mandatory pre-departure PCR test for fully vaccinated travellers is not rooted in science and should be removed,” he said in a media statement.