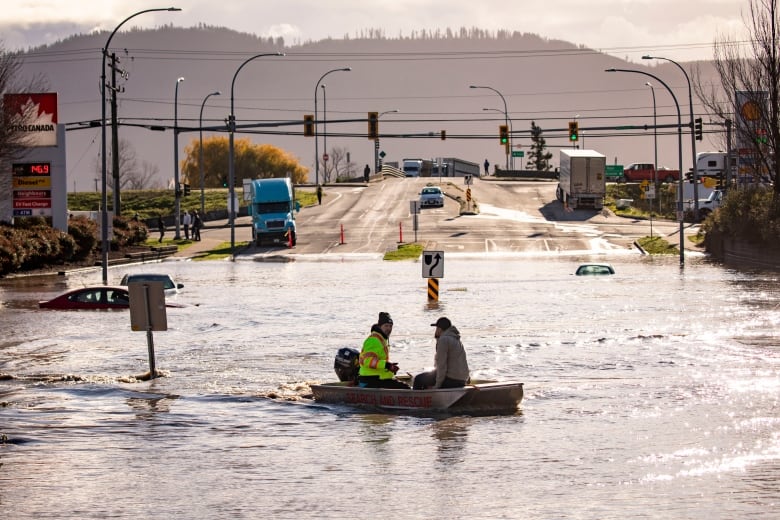 The announcement comes after record-breaking rainfall caused major flooding and several mudslides that left hundreds of people in the Lower Mainland stranded or cut off from essential services.

According to the premier, the declaration will give the government greater flexibility to help keep goods moving, as major road closures have hampered the supply chain.

Thousands of people have been displaced from their homes and one woman was confirmed dead on Tuesday after a mudslide swept across a portion of B.C.’s Highway 99. Investigators have received reports of at least two other people who are missing.

“We expect to confirm even more fatalities in the coming days,” said Horgan.

The state of emergency is in effect for 14 days with the possibility of extending it if needed.

It is intended to help the government get rail and roadways back up and in operation.

“Our focus is on clearing, repairing and reopening roads to connect the Interior and the North to the Lower Mainland and Vancouver Island, to get our supply chains moving,” Rob Fleming, provincial minister of Transportation and Infrastructure, said in a statement.

In the Fraser Valley, evacuation orders remain for residents in the Sumas Prairie area of Abbotsford and the community of Yarrow and Majuba Hill in Chilliwack.

Abbotsford city officials said Wednesday morning that 184 people had been rescued from the Sumas Prairie area overnight with support from the local police, fire and search and rescue teams. In Chilliwack, officials say 640 evacuees have already registered at an emergency reception centre.

Residents in areas of both cities under evacuation alert were endangered by what officials called the “imminent failing” of the Barrowtown Pump Station, which, as of Tuesday night, was the only thing keeping excess water flow from the Fraser River from entering the flooded area.

The station was also in danger of being inundated with floodwaters flowing north from the Nooksack River in Washington state.

However, city staff and volunteers in Chilliwack and Abbotsford worked through the night to build a 25-metre dam around the station to hold back the rising water.

The University of the Fraser Valley in Abbotsford has cancelled classes for the rest of the week, and schools in Chilliwack and Hope are closed Wednesday.

Fraser Valley residents are also being warned by the Abbotsford Police Department of a large structural fire burning at an RV dealership in the area of Sumas Mountain Road and North Parallel Road.

Residents who remain in the area are being asked to stay indoors as the dangerous situation is being assessed and the smoke could be toxic.

Abbotsford fire Chief Darren Lee said a major concern is the fire’s proximity to a nearby propane filling station and an overhead power line.

“If you actually have enough smoke, the power can go to ground through the smoke particulate,” said Lee.

Cut off and stranded

All four highways that connect the Lower Mainland with the rest of the province have been closed by landslides and flooding that dumped a month’s worth of rain over two days.

Thousands of evacuees remain in more than 20 evacuation centres across the province, with the city of Hope, B.C., hosting 1,100 people currently cut off from the Lower Mainland. Officials said they are working to provide an access road to the community.

Transportation Minister Rob Fleming said in a media conference on Tuesday that crews had begun work on restoring the province’s highway network, but did not have specific timelines for when crucial arteries would reopen.

Fleming said Highway 3 might be able to reopen by the end of the weekend, but he wouldn’t hint at when the Trans Canada Highway (Highway 1), the Coquihalla (Highway 5), and Highway 99 would reopen.

As of Wednesday morning, Highway 7 west of Agassiz had reopened a single lane open to emergency vehicles only.

Staff are prioritizing Highway 3 to ensure access to the Interior from the Lower Mainland is not cut off.

Work will take longer on Highway 5 (the Coquihalla) and Highway 1 (the Trans Canada Highway), with staff confirming washouts and mudslides on both routes.

Public Safety Minister Mike Farnworth said there are still “options” for the province’s supply chain at the moment, urging people to be patient.

He is chairing a cabinet meeting on Wednesday looking to declare a provincial state of emergency due to the flooding situation.

Prime Minister Justin Trudeau tweeted that he would be willing to provide any support the province needs.

On Wednesday morning, Minister of Emergency Preparedness Bill Blair said the federal government has approved the deployment of air force personnel to help B.C. deal with the aftermath of the floods.

Also Wednesday morning, the Canada Border Services Agency said in a statement that given the current situation in B.C., travellers who must transit through the U.S. to get to their residence in Canada are exempt from the COVID-19 pre-arrival test, the test in Canada and quarantine requirements.

Anyone placed under evacuation order should leave the area immediately.

To find an evacuation centre close to you, visit the Emergency Management B.C. website.

Road conditions can be checked at DriveBC.