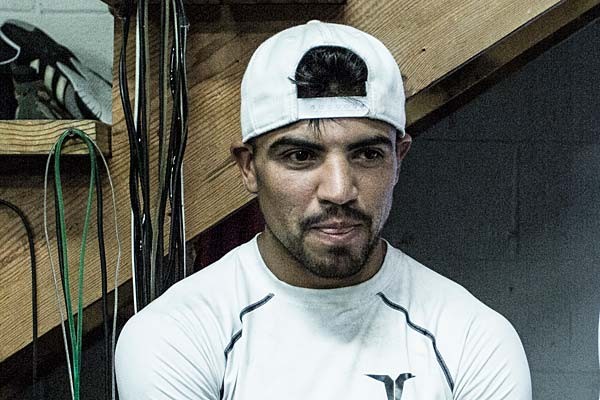 Victor Ortiz feels he can be among the best fighters in the welterweight division.

The story may not be a new one but former welterweight titleholder Victor Ortiz insists he still has the hunger to fight, even if there have been questions about his fortitude given the number of times he has seemed to give less than an optimal effort.

Once again, Ortiz will return to the ring saying all the right things as he gets set to take on Mexican journeyman Saul Corral in a 10-round welterweight fight that will headline a Premier Boxing Champions card on Sunday (Fox Sports 1/Fox Deportes, 7 p.m. ET) at the Rabobank Theater in Bakersfield, California.

“The hunger is definitely still there inside of me,” Ortiz said at a media workout this week in his hometown of Ventura, California. “When I became world champion, it was a short-lived experience. I had reached a high pinnacle and lost it in a fashion that I was never satisfied with. I’m blessed to be healthy enough to come back.

“Having my son be born (Victor Royal Ortiz) is probably part of the reason that this hunger grew inside of me and motivated me to get back in the ring. I have goals and accomplishments that I want to reach.”

The notion of Ortiz, once one of the hottest rising stars in boxing, fighting for another world title is probably a stretch. He is just 2-4 in his last six, has not looked particularly good and had long layoffs. But he said he wants to give it another go as he fights for the first time in 15 months following a fourth-round knockout loss to rival Andre Berto in their rematch.

“I still feel like I can be one of the best in the 147-pound division,” Ortiz said. “It’s there for the taking. There are some gifted fighters in there and I respect them, but I believe that I have what it takes to be right up there. I’m a complete fighter.”

It was in April 2011 that Berto and Ortiz met for the first time and waged a sensational fight of the year contender. Both fighters got knocked down twice apiece and Ortiz hung on for a unanimous decision win to take a welterweight world title from Berto.

“I still feel like I can be one of the best in the 147-pound division. It’s there for the taking. There are some gifted fighters in there and I respect them, but I believe that I have what it takes to be right up there. I’m a complete fighter.”

Five months later Ortiz lost the title when he got knocked out, some say controversially, by Floyd Mayweather. It was the first of three losses in a row for Ortiz, who dealt with injuries and also made a bit of a name for himself in Hollywood as he starred on “Dancing with the Stars” and landed movie roles in “The Expendables 3” and “Southpaw.”

When he returned from a 19-month layoff in January 2014 to face former titlist Luis Collazo, Ortiz lost his third in a row, this time by second-round knockout when he appeared to quit after getting knocked down. To many that loss should have signaled the end of his career.

Ortiz, a southpaw, won his next two fights, but against low-level opposition and with a year off in between before getting stopped by Berto in the rematch.

But here Ortiz is once again talking the talk and insisting he will walk the walk.

“I’ve been written off before,” he said. “People have said I should retire since my first loss. I came back from that loss and became a champion. I don’t care what people have to say about me. I could go act full-time if I wanted, but I truly love this sport.”

The 30-year-old Corral (24-9, 15 KOs) has faced a few name opponents, but lost whenever he stepped up in class, including to former junior welterweight world titleholder Mike Alvarado and former title challengers Sadam Ali and Josesito Lopez, who owns a ninth-round knockout win against Ortiz.

“I know that Saul Corral will be ready for me. This is a camp where I made sure to listen to everything my coach said,” Ortiz said. “I went to work 110 percent every day. I didn’t take any shortcuts and I’m feeling great.”

Ortiz said he looks at this fight as a new start — yet again.

“When I took a step back, I realized that boxing has always been my true passion,” he said. “I can’t walk away from something that I’m so gifted at and that I enjoy doing so much.

“I never get too worried about who is going to be in front of me on fight night. I just need there to be a ring. I’m excited to get back in there and get in the swing of things. I’m ready to fully pursue my goal of getting another world title.”

In the 10-round junior middleweight co-feature, Justin DeLoach (17-1, 9 KOs), 23, of Augusta, Georgia, will take on Jamaica native Nathaniel Gallimore (18-1-1, 15 KOs), 29, of Evanston, Illinois. Gallimore took the fight this week when former title challenger Fernando Guerrero dropped out because of illness.