Officials probe arrival of 500 puppies, 38 of them dead, aboard flight from Ukraine 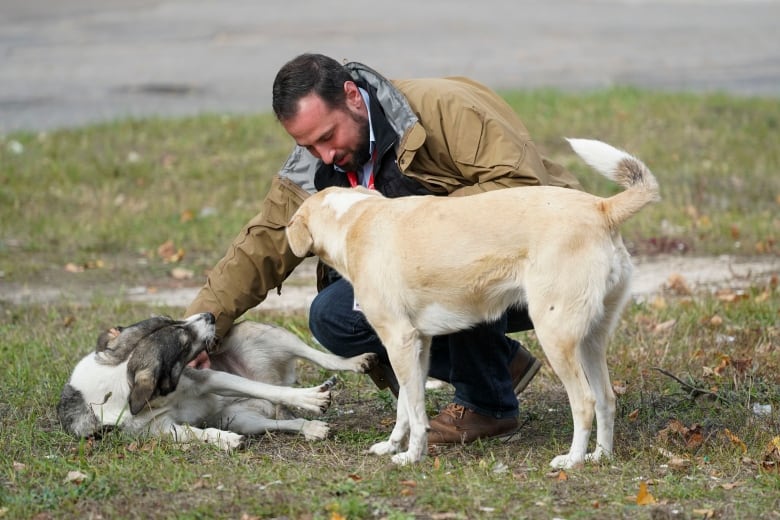 The Canadian Food inspection Agency is investigating after the gruesome discovery of dozens of dead and dying dogs aboard a recent flight from Ukraine.

The CFIA confirms that a Ukranian International Airlines flight arrived at Toronto’s Pearson International Airport from Kyiv last Saturday with approximately 500 French bulldog puppies on board, dozens of them dead and dozens more dehydrated and seriously ill.

“Upon inspection, it was found that 38 were dead on arrival,” a spokesperson wrote in a statement.

“CFIA officials are currently investigating the circumstances surrounding this incident and will determine next steps once the investigation is complete.”

Abby Lorenzen, a professional show dog handler, who happened to be at the cargo area of the Toronto airport to pick up a different animal described the scene as a “horror show.”

“It was just a nightmare,” Lorenzen told CBC News.

“Canada and the federal government need to change the laws on the importation of these puppies,” she said.

At the airport in Kyiv, witnesses at the loading area became suspicious last Saturday and recorded video of what appears to be men loading stacks of animal crates filled with puppies bound for Toronto.

That video is now circulating on social media, but the airline won’t discuss why it allowed more than 500 animals on one flight.

WATCH | Witness video of crates being loaded at airport in Kyiv:

Witnesses in Kyiv videotaped drop-offs as 500 puppies were put on a single flight to Canada. 0:21

“Everyone at UIA offers its condolences for the tragic loss of animal life on our flight,” the company said via social media. “UIA is working with local authorities to determine what happened and to make any changes necessary to prevent such a situation from occurring again.”

UIA is a member of IATA (International Air Transport Association), which has voluntary codes that are supposed to restrict and ensure the safe transport of live animals. For instance, most Canadian carriers only allow two animal crates per flight and refuse to fly with caged animals if temperatures exceed 29.5 C.

Animal welfare advocates say the Toronto incident is just the latest in a series where flights from Ukraine and Eastern Europe are crammed with very young puppies destined for resale to unwitting owners.

“These commercial operations are run by large puppy mills that house and breed hundreds and thousands of dogs every year in typically unsterile conditions where the dogs are crammed together,” said Lucas Hixson of SPCA International in an interview from Slavutych, Ukraine where he works with a rescue group Dogs of Chernobyl.

“Traditionally for international animal transport you will not have space in the cargo hold for hundreds of animals,” said Hixson who believes the flight was organized puppy smuggling.

“This commercial operation specifically chartered this plane to increase their bottom line, thereby putting those animals at risk.”

Officials in the U.S. have turned away flights and have documented numerous cases of mass imports by covert groups using faked papers and forged vaccination records to circumvent import restrictions.

CFIA insists “Canada has rigorous standards for animal imports in order to protect Canadian animals from the introduction of serious animal diseases. All import requirements must be met before an animal is imported.”

However, Canada’s Public Health Agency is studying the current federal regulations out of concern for diseases spread by exotic pet imports, says Prof. Scott Weese of the University of Guelph.

Weese says based on online adds on Kijiji or Craigslist, there is a lucrative market for the sale of puppies that most buyers likely believe are bred here in Canada.

“It is a big industry. There’s no doubt about it. And it’s been looked at more in the U.S. and there’s potentially some organized crime component of it, too, in some areas,” he said.

“There are lucrative situations where you can buy large numbers of dogs fairly cheaply. You mentioned 500 French bull dogs. If those are going for sale at $3,000 $4,000 dollars a dog, that’s a massive amount of money.”