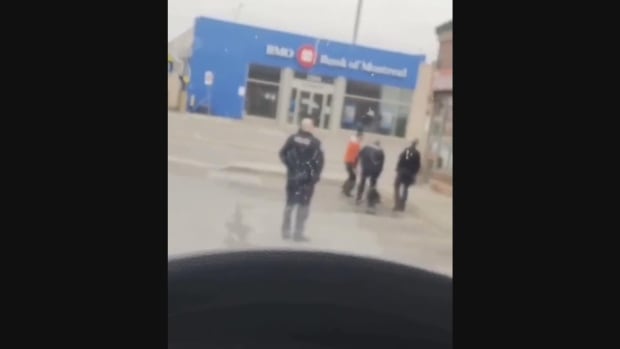 The Halton Regional Police Service says it has suspended one of its officers in connection with a video circulating online Saturday that appears to show an officer pushing and hitting a youth.

“The treatment of the youth by the officer does not fit the standards of the Halton Police under any circumstances,” Oakville Mayor Rob Burton said in a tweet on Saturday.

“I deplore the unprofessional and undisciplined behaviour displayed in the video. I’m glad the Chief has suspended the officer and begun an investigation.”

The video surfaced online through the popular Toronto-centric Instagram account “6ixbuzztv” on Saturday, although it is unclear who originally shot the video.

CBC Toronto has not been in contact with the civilian seen in the video.

In a statement issued Saturday, Halton Police acknowledged the video, which depicts “an altercation between our officers and an individual of Oakville,” which is about 40 kilometres southwest of Toronto.

“We recognize this video raises a number of questions,” the statement reads.

In an email to CBC Toronto Saturday evening, Halton Police spokesperson Jennifer Hartman confirmed that they suspended an officer in the video, and said there there was no timeline for when they will be issuing a further update.

Desperate to see his dying mom, a bus driver put out a plea. The response bowled him over