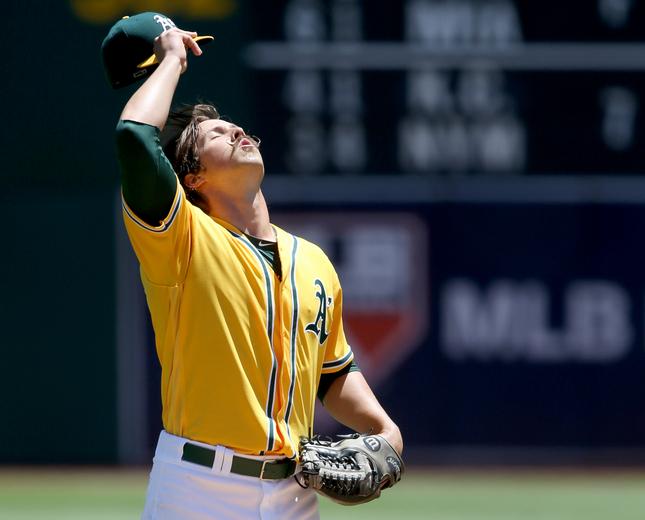 We’re in the dog days of August, but the Oakland A’s new group of rookie hitters is managing to keep the end of this last-place season interesting. What about the rest of the roster, though? Here are some minor updates from the last several days.

Phegley and Smolinski are both arbitration-eligible after the season, and neither has been able to stay consistently healthy over the last few years. Are they non-tender candidates at this point? In particular, the 28-year-old Smolinski is now blocked by a lot of right-handed bats in the corner outfield and DH spots (Khrush, Healy, Pinder, Nunez, Canha, soon Marincov).

Oakland’s bullpen has fallen apart since the trade deadline. They dealt their top two arms in Sean Doolittle and Ryan Madson, and while the return package is looking totally worth it so far there are still innings to be filled and leads to be held in the present day. Here’s the latest:

The two new pitchers aren’t just tank commanders here to help us play out the string. Both carry a little bit of upside and have real chances to play roles in 2018, and Moll in particular is probably the second-best lefty right now after Coulombe — the A’s have been desperately short on southpaws this year, even before trading Doo. Furthermore, they replaced Smith and Neal, a pair of actual tank commanders who profile best in mop-up duty.

Still, you have to hope that next year’s closer isn’t currently in the organization. There is an interesting collection of potential setup candidates and strong middlemen, even looking down into Triple-A (esp Alcantara, Bassitt), but there is no reliable top arm to truly seal the deal. Fortunately, there will be plenty of late-inning options in free agency next winter if the A’s choose to go that route, and they should have a ton of money to work with given the cheap youth filling the rest of the roster.

There will be more blown leads the rest of this year, but at least the landscape is slightly more promising than it was a couple weeks ago.