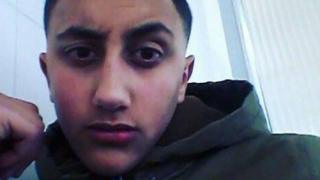 The key suspect in Thursday’s Barcelona attack, Moussa Oukabir, has been named as one of five men killed by police in the other attack site, Cambrils.

Police had earlier said they were searching for Oukabir and three other men. Now only one remains unaccounted for. Four suspects have been arrested.

Thirteen people were killed when a van, said to be rented by Oukabir, rammed crowds in Barcelona’s Ramblas district.

Police say the suspects had been planning more sophisticated attacks.

They said blasts on Wednesday in Alcanar, a town south of Barcelona, deprived plotters of bomb material so they carried out simpler attacks using vehicles.

Moussa Oukabir, thought to be 17, was a Spanish citizen from the northern Catalan city of Girona. Most of the other suspects were Moroccan.

He is suspected of using his brother’s documents to rent the van used in the Barcelona attack and another found hours later in the town of Vic, north of Barcelona, that was intended as a getaway vehicle.

Later the same night police shot dead five attackers including Oukabir in the nearby town of Cambrils after they drove a car into pedestrians killing one woman and injuring six others.

The attackers’ vehicle overturned and when the men got out they were quickly fired upon by police. One was reportedly brandishing a knife.

The men were wearing what appeared to be explosive belts, police said, but these proved to be fake,

Police told media that Said Aallaa, 18, and Mohamed Hychami, 24, who they had earlier put on a wanted poster with Oukabir, were among the dead.

A fourth suspect, named as Younes Abouyaaqoub, 22, is still unaccounted for.

Four others have been arrested, one in Alcanar after Wednesday’s explosion and three in the Catalan town of Ripoll after the Barcelona attack.

Oukabir’s brother Driss was one of them. He reportedly turned himself in, telling police he was not involved and that his documents had been stolen.

Only three of the dead have been named so far:

One Belgian, one Canadian and one US citizen have also been confirmed dead.

Seven-year-old Julian Cadman, a dual British-Australian national who was separated from his mother during the attack, is missing, ABC Australia reports. His mother was reportedly among the seriously injured.

The Islamic State (IS) group said it had carried out the attacks, though it is not clear whether the attackers were directly connected to the group or simply inspired by it.

What is the timeline of events?