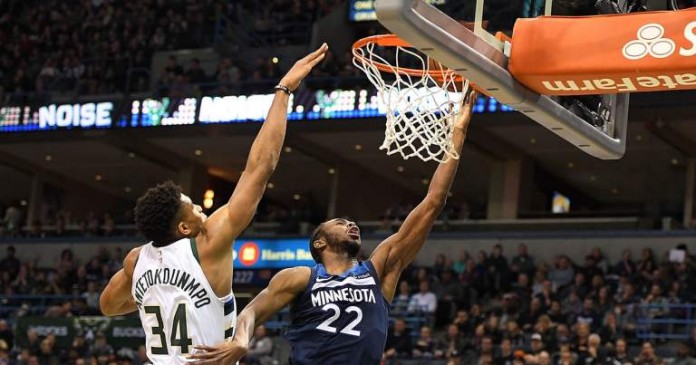 The Minnesota Timberwolves will attempt to even their regular season series with the Milwaukee Bucks, when they meet at the Target Center early Friday morning, in a game that will be another in a series of ties that will set the tone for the fast approaching 67th NBA All-Star Game.

When the final line-up – both starters and reserves, of the 2018 All-Star Game was announced some of the players that missed the cut, and their team mates, passed various comments about both the process and some of the players selected ahead of them. Some of these stars, like Paul George, Lou Williams and Andre Drummond, went on to post monster numbers in the days following the selection; underlining the point that it was wrong to ignore them.

The likes of George and Drummond have since been selected as replacements in place of players that have picked up injuries after the process was completed.

Giannis Antetokounmpo and Karl-Anthony Towns are not in any of these two categories: Giannis was voted as a starter, while Towns was selected as a reserve. Both belong to the category of big men who are redefining their position, and battling for the limited space at the top of the heap. Antetokounmpo, who will be making his second appearance as an All-Star, is ahead of Towns in this regard. But both will be teammates in Team Stephen, and this meeting will be the last chance for either to take bragging rights to the All-Star Weekend.

Karl-Anthony Towns has averaged double-doubles all his career: from the 18.3 points and 10.5 rebounds per game of his rookie career, where he started all 82 games for the Wolves, averaging 32.0 minutes per night, to the 19.8 points and 12.1 rebounds he is averaging through 54 games so far this season, Towns has played every regular season game for Minnesota since he came to the league three years ago.

It took the Greek Freak a little over a season to become a regular starter for the Bucks, he has not played every game since he made his NBA debut in 2013, and the 28.5 points and 10.3 rebounds he is averaging through the 45 games Milwaukee have played this season, is the first time he will be averaging a double-double. However, Antetokounmpo has been the poster boy for accelerated improvement since he stepped into the league as a raw recruit out of Greece, and he led the Bucks into the playoffs last season.

And unlike Towns, Antetokounmpo is a proven multi-positional player, who can affect the game in many ways. That is why the face-off between the both of them will be fun to watch; it is both a pre-All-Star showdown, and a bragging rights battle, all rolled into one. In their last meeting, both players scored 22 points, but Giannis added 10 rebounds, while Towns managed only four as the Bucks won 102-96.

The other personnel battle that will be interesting to see is the face-off between Jimmy Butler and Eric Bledsoe – if he is cleared to play in this game, after hobbling off the court in the win over the Philadelphia 76ers. Butler is the shooting guard/small forward for the Wolves, while Bledsoe is the point/shooting guard for the Bucks. Butler, who is in his seventh season in the league, will make his fourth All-Star appearance in Los Angeles later this month, while Bledsoe has not been in consideration the eight years he’s been in the league. Not that the Birmingham, Alabama native has not proved himself in the league; although the 16.9 points per game he is averaging is his lowest since he averaged 8.5 points per game for the season in his 3third year, he is currently second in the league in steals with an average of 2.1 per contest, and his 3.5 steal percentage is the best in the league. His 27.2 usage percentage is the second best among all Milwaukee players, next to Giannis, as per basketball-reference.com.

Andrew Wiggins can be a liability in defence but is averaging 18.1 points and 5.4 rebounds per game, while Taj Gibson is playing solid defence while recording 12.2 points, 7.4 rebounds and almost one steal per game.