North Korea says missile test shows all US within range 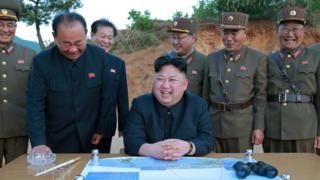 North Korea has hailed as a success its latest test of an intercontinental ballistic missile describing it as a “stern warning” for the US.

North Korean leader Kim Jong-un said the test proved that the entire US was within striking range, state media reported.

US President Donald Trump called it “only the latest reckless and dangerous action by the North Korean regime”.

Confirming the launch, the North said the ICBM flew for just over 47 minutes and reached an altitude of 3,724km (2,300 miles).

It said the launch had “successfully tested re-entry capabilities” of the missile.

“The leader said proudly the test also confirmed all the US mainland is within our striking range,” the Korean Central News Agency said.

The statement said that the rocket was a Hwasong-14, the same model North Korea tested on 3 July.

Analysis: New York may be in range

North Korea’s latest ICBM test went farther and higher than their previous 3 July test, meaning that they may be able to strike even deeper into the heartland of the United States than initially assessed.

Within minutes of the launch, South Korean, Japanese and US officials reported data about the location, range, apogee, and flight time of the missile. While full analysis has not been finalised yet, several points stand out.

First, the data available indicates that the missile may have a range of approximately 10,400km. Since this missile is road-mobile, a launch from the north-eastern city of Rason would put New York City in range of the ICBM.

Second, the US reported that North Korea launched the ICBM from Mupyong-ni, North Korea. This location was different from many press accounts leading up to the launch which predicted a Kusong launch. The missile launched at 23:11 local time, an unusual time for North Korea’s tests as well. It is possible that North Korea is already experimenting with deploying the missile under the cover of night or setting up multiple launch sites to confuse observers.

Reports on Friday said the missile had come down in the sea off northern Japan.

In response, the US and South Korean military conducted a live-firing exercise using surface-to-surface missiles, a US defence official said.

The missiles were fired into the “territorial waters of South Korea along the east coast,” a US military statement said.

South Korean Defence Minister Song Young-moo said the country would prepare independent measures to curb the North Korea threat, speeding up the deployment of the Terminal High-Altitude Area Defense system (Thaad) provided by the US.

The North has repeatedly tested missiles in breach of UN resolutions.

The Pentagon said the latest missile was launched at 23:41 (15:41 GMT) from an arms plant in Jagang province in the north of the country.

It is unusual for North Korea to launch a missile at night – the significance is as yet unclear. No missiles had been fired from Jagang province before, indicating a previously-unknown launch site is operational.

The US, Japan and South Korea roundly condemned the latest action by Pyongyang.

Japanese Prime Minister Shinzo Abe said the threat to his country’s security was “grave and real” while Pentagon spokesman Capt Jeff Davis said the US was prepared to defend itself “and our allies from any attack or provocation”.

South Korea’s President Moon Jae-in convened an emergency security meeting for the middle of the night.

Despite the ongoing tests, experts believe the North does not yet have the capability to miniaturise a nuclear warhead, fit it on to a long-range missile, and ensure it is protected until delivery to the target.

Others, however, believe that at the rate it is going, Pyongyang may overcome these challenges and develop a nuclear weapon within five to 10 years that could strike the US.