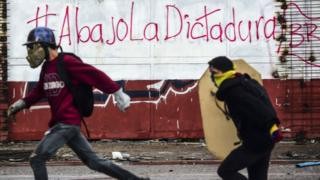 Colombia’s President Juan Manuel Santos says his country will not recognise the result of Sunday’s vote in neighbouring Venezuela to elect a new assembly with power to rewrite the constitution.

“The constituent assembly lacks legitimacy and because of that we cannot accept the result,” he said.

Venezuela’s President Nicolás Maduro called the vote as protests against his government gained momentum in May.

The opposition sees it as a move towards dictatorship.

The new constituent assembly, comprising 545 members, will rival the National Assembly, currently controlled by the opposition.

“We insist on a peaceful solution for the country’s situation,” said President Santos.

Venezuela has banned protests that could “disturb or affect” the vote.

Prison terms of between five and 10 years could be imposed on those contravening the ban, Interior Minister Néstor Reverol said on Thursday.

The ban on activity will remain in force until Tuesday.

At the scene: Streets are eerily quiet

When you drive around Caracas at night, you really notice the lack of street lights – it’s very dark and it feels unsafe.

A day after the government banned protests ahead of Sunday’s vote, the streets of Caracas felt eerily quiet.

There were sporadic demonstrations but what stood out were the blockades or “guarimbas” as the Venezuelans call them. Some barricades are just piles of rubbish, others are made with bricks or barbed wire.

It’s a tactic used by the opposition aimed at halting traffic and causing disruption. And it works – finding a straightforward route is hard, dodging cars driving down the wrong side of the road is the norm, it seems, anything to find a way out of the barricades and get home.

More than 100 people have been killed in protest-related violence since April.

The situation has worsened to the point that the United States has ordered family members living at the embassy in Caracas to evacuate the country. It also authorised its staff members to leave if they desire.

Mr Maduro said his opponents should “abandon the road to insurrection” and added that he would be willing to begin a “roundtable dialogue in the next few hours”.

On Wednesday, the US imposed sanctions on 13 senior Venezuelan officials, including Mr Reverol.

The sanctions freeze the US assets of those targeted and stop American entities from doing business with them.

Mr Maduro responded by describing the US as imperialists bent on ruling the world and called the sanctions “illegal, insolent and unprecedented”.