‘No relief in sight’ for wildfire forecast in southern B.C. as thousands remain under evacuation order 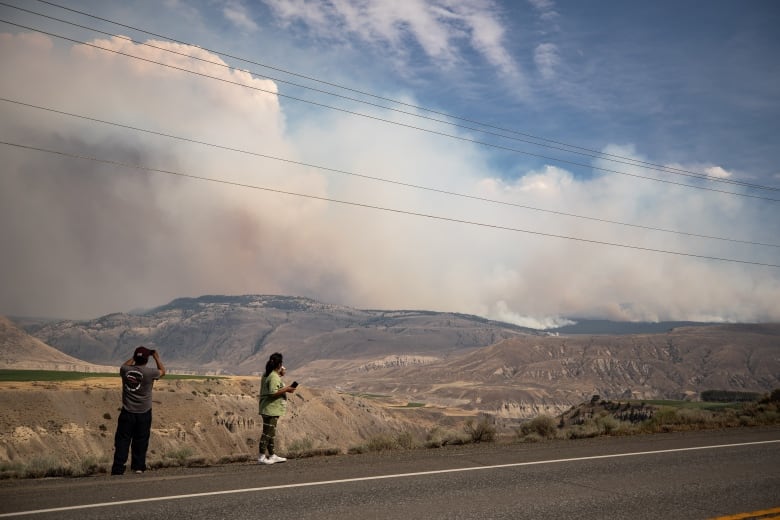 Thousands of properties in B.C. remain under evacuation order or alert Friday as hundreds of fires burn across the province, some fuelled Thursday by consistently warm temperatures and strong winds.

Officials had ordered the evacuations of more than 5,000 properties in B.C., as of Thursday evening. Another 17,000 properties across the province are on evacuation alert, meaning people living there must be prepared to leave at a moment’s notice.

Three-quarters of the evacuation orders are concentrated in the Kamloops Fire Centre region, which includes the Okanagan Valley. The area is seeing some of the province’s largest fires — including the Nk’Mip Creek, Thomas Creek, Lytton Creek and Sparks Lake fires, the latter being the largest at 558 square kilometres.

Conditions are extremely dry in the southern half of the province and there is “no relief in sight,” he said.

There was better news in northern B.C., where Meier said cooler temperatures and precipitation had allowed officials to reallocate some resources further south.

An evacuation order and alert was rescinded on Friday afternoon for properties near the Grizzly Lake wildfire, burning southeast of Prince George.

Portions of Highway 1 and 12 — which have been closed since June 30 due to wildfires and to support firefighting operations — reopened Friday. Drivers can now travel from Hope to Lillooet via Highways 1 and 12, or from Hope to Cache Creek via Highway 1.

Help was also on the way for the 3,193 personnel currently on the fire lines, with 112 personnel due from Quebec on Friday, 100 Mexican firefighters expected to arrive on the weekend and an unspecified number of military personnel already staging in the Okanagan.

Among the new areas under evacuation orders was the community of Spences Bridge, now threatened by the same wildfire that destroyed the village of Lytton to its south in a matter of minutes three weeks ago.

That fire has now grown to more than 150 square kilometres — an area larger than the City of Vancouver.

Late Thursday, the Osoyoos Indian Band expanded its evacuation order to cover more than 30 additional properties due to the Nk’Mip Creek fire in the southern Okanagan.

That fire is estimated to be 68 square kilometres. B.C. Wildfire Service says high temperatures and wind speeds have resulted in heightened wildfire activity and increased smoke at the Nk’Mip Creek fire.

The entire community of Ashcroft, around 70 kilometres west of Kamloops, has been on evacuation alert since July 14, as the Tremont Creek wildfire continues to burn nearby. The risk to the community remains low, according to officials.

In the Kootenays, residents of 356 properties in the communities of Edgewood and Needles have been told to stay out of their homes because of the growing Michaud Creek wildfire, which was last estimated at 46 square kilometres.

The Young Lake fire, located to the southeast of 70 Mile House, led to the evacuation of another 103 properties in the Bonaparte Plateau area of the Thompson-Nicola Regional District.

Roughly 168 properties in the Kootenay communities of Apple Grove and Fauquier have been ordered to evacuate due to the 32-square kilometre Octopus Creek wildfire.

Air quality statements remain in effect for central and southeast parts of B.C. A smoky-skies bulletin from Environment Canada said residents might experience symptoms “such as increased coughing, throat irritation, headaches or shortness of breath.”

The air quality was especially poor in Castlegar and Kamloops on Friday.

Evacuees are encouraged to register online with Emergency Support Services, whether or not they access services at an evacuation centre.