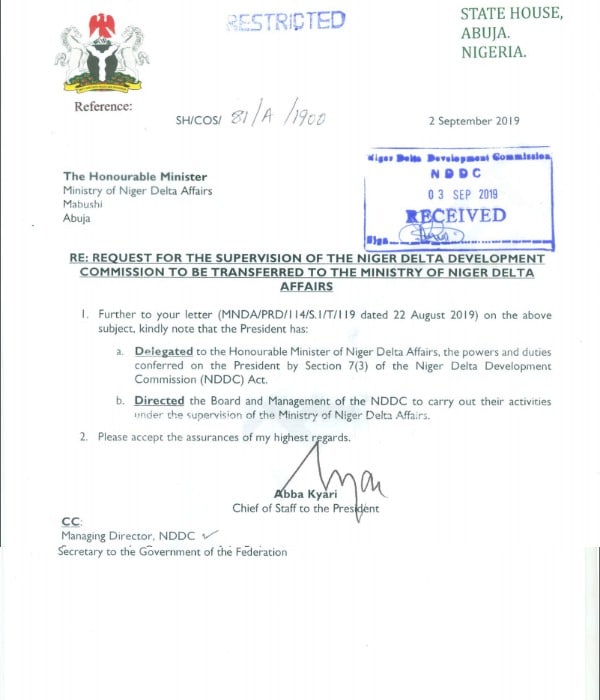 The Minister of Niger Delta Affairs, Senator Godswill Akpabio who curiously asked and got the nod to allegedly usurp the statutory powers of President Muhammadu Buhari to enable him annex and have a firm control of the Niger Delta Development Commission, NNDC, under his powers had in a split of weeks have his fingers burnt in controversies.

Akpabio, DAILY POST learnt, has landed himself in an allegation of N1.9 billion hyacinth contract fraud reportedly approved by the former NDDC minister.

The New Diplomat, an online platform had reported that Apkabio deployed phoney companies to scoop the huge sum of money to himself and cronies.

It was also gathered that the payment was even done without raising any voucher or recourse to any “tender, due process or proper documentation, a sad development that has pitted the minister with some top NDDC management staff and stakeholders in the region.

As the transfer of the Niger Delta Development Commission to the Ministry of Niger Delta continues to generate some furore among stakeholders, facts are emerging on some underhand deals that might have taken place.

DAILY POST recalls that long before the transfer of the NDDC was officially sealed through Buhari’s October 1, address, the Chief of Staff to the President, Mr Abba Kyari had, through a memo, delegated the effective control of the Commission to Akpabio.

Against this backdrop, stakeholders are wondering why the Minister’s first assignment, barely 24 hours after, was to scheme for the control of Niger Delta Development Commission, NDDC, a statutory commission that was meant to be autonomous but with the supervision of the President of the Federal Republic of Nigeria.

Further, an anonymous NDDC staff alleged that there are rumours that the Minister had promised ‘the powers that be a huge share of the contracts to be awarded in the commission’. It is further alleged that the Minister held on to the Commission’s budget submitted to him for over one month in order ‘for him to amend the documents to suit his greed’.

As public outcry trails the alleged N1. 9 billion, it was even alleged that Akpabio has also submitted 11 files for payment that has to do with some emergency desilting projects under suspicious circumstances.

The payment files, an insider source disclosed, was personally submitted to the Acting MD by the NDDC Director, Project Monitoring and Supervision, PMS, on the directive of Akpabio. But the MD allegedly refused to sign for onward payment. It’s, however, not clear yet if the files were later signed as requested.

The source alleged that ‘interim payment certificates were raised three days after raising a bill of quantity for the same projects, thereby indicating that no work was so far done to hurriedly warrant such payment.

Though the alleged controversial payment is being met with stiff resistance, the Minister reportedly had threatened to sacrifice those standing on his way in a matter of days to sustain his job.

However, when grilled on telephone, Akpabio’s media aide, Aniete Ekong, said the incident about alleged N1.9 billion scam followed a protest in PortHarcourt by some irate youths who besieged a hotel where Akpabio was holding a meeting in company of the then Minister of State of the Ministry of Niger Delta Affairs, Festus Kayamo.

He told DAILY POST that the youth protested against nonpayment of some executed contract and, Akpabio, therefore, directed that the payment be made. But Ekong did not explain the manner of payment and beneficiaries involved in the payment as directed by Akpabio.

Meanwhile, the spokesperson of the aggrieved former militants, General Ebi, had called on Buhari to direct the anti-graft agencies to immediately swing into action over the matter.

He said, “It is so pathetic, disgusting and shameful that our so-called leaders are the real problem in the Niger Delta, if a distinguished leader that was once the governor of Akwa Ibom state for 8years and is currently the minister of Niger Delta Affairs will condescend so low to have appropriated 400 slots of the water hyacinth contract to himself after accusing the former NDDC board of misdeeds.

“1.9billion naira was approved by the honourable minister of Niger Delta
affairs Senator Godswill Akpabio for the payment of the water hyacinth
as an empowerment scheme to the various beneficiaries and youths of the
Niger Delta.

“But so far, what we have heard from the Director of Environment Mr Boniface Sese, who is in charge of compiling the list, is that the master list of beneficiaries has been cancelled since the former board was dissolved and was directed by the present acting MD to compile a new list of just 100 slots for the youths, 400 slots for senator Godswill Akpabio, 300 slots for the current acting MD, but him Boniface Sese the Director of Environment refused to disclose how many slots were allotted to him. However, our findings reveal that all his staff and aides are allotted 5 slots each and some directors, 10 slots.

“We, therefore, use this medium to call on the attention of the President and Commander-in-Chief of the Federal Republic of Nigeria, Muhammadu Buhari to direct the EFCC and the ICPC to immediately swing into action and we also call on the honourable minister of Niger Delta Affairs, Senator Godswill Akpabio to come out clean and exonerate himself as his reputation is being dragged to the mud to defraud the youths of the Niger Delta’.

Besides, investigations, have revealed that NDDC is, yet, to get a new Board.
Based on all these alleged cases of official corruption against Akpabio, controversies are building up against Akpabio’s status in the region.

Some groups have petitioned the Minister of Justice and Attorney General of the federation, Abubakar Malami opposing the transfer of NDDC to a ministry.

The petition affirmed that the NDDC Act charged the office of the President of the Federal Republic of Nigeria with the sole responsibility of overseeing the affairs of the commission and same is not delegate-able to any person or body.

But Akpabio’s spokesman who dismissed the whole allegations of graft against Akpabio as unfounded and baseless said he did not have the understanding of the questionable payment files currently submitted on the directive of Akpabio for payment. 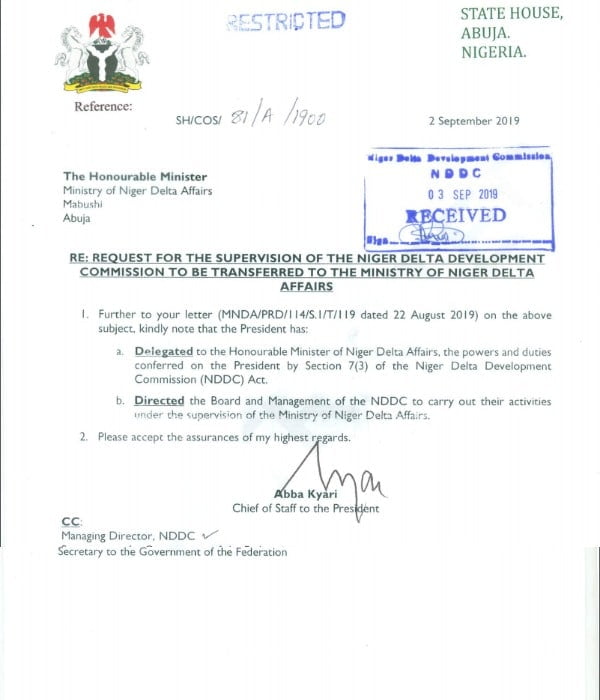