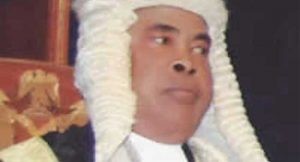 There seems to be some confusion over the amount tendered as alleged corruption proceeds recovered from Justice Sylvester Ngwuta’s house.

The trial judge, Justice John Tsoho has announced in court that the amount marked “Exhibit 11h” is incorrect.

The Judge also told the parties at the resumed hearing of the case today that the prosecution had informed the court that N35, 358,000 million is the amount found at Justice Ngwuta’s house.

But the officer of the Department of State Services (DSS) John Utazi when cross-examined insisted that there was no difference between the money tendered and the one recovered from Justice Ngwuta’s house.

However, he told the court that he was not present when the money was counted in the court as ordered by the judge.

An attempt by the defence council to tender the report on the figure of the recount as the evidence was rejected by the prosecution council.

Still, under cross-examination, Mr Utazi was asked if he had a warrant, he told the court that he was only obeying an order to execute a warrant and didn’t ask the source.