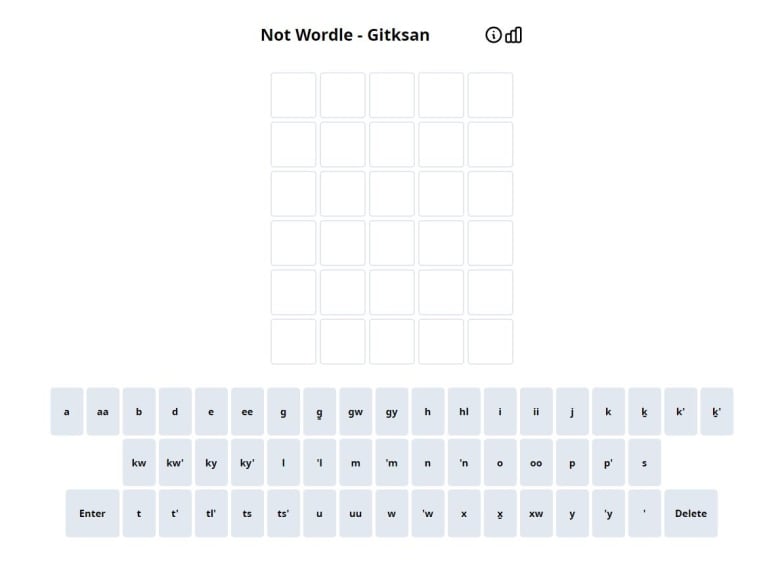 “Maadim was the word yesterday, which is the ‘snow that’s falling,'” she said, looking at her smartphone screen.

The game in question is titled Not Wordle – Gitksan, modelled after the popular online game where players are given six tries to guess a five-letter word — but features words in Gitxsanimx, the language of the Gitxsan Nation in northwestern B.C.

Chief Geel says the daily challenge is building her vocabulary in a language she’s not fluent in.

Geel and other Gitxsan leaders helped develop the game with Aidan Pine, a Victoria, B.C.-based linguist who used open source software developed to allow programmers to create their own variations of the popular Wordle game.

In consultation with language speakers, the team used a Gitxsanimx dictionary compiled in the 1970s to select the words to use in their version of the game.

One challenge was adapting the structure of Wordle — which is limited to five-letter words — to the Gitxsanimx alphabet, which often uses combinations of letters and punctuation such as “gw” and “ky'” to express specific phonetic sounds.

The solution is a keyboard which includes not just the English alphabet, but also special keys featuring multiple letters that count as a single character.

Pine said while it took him very little time to develop the game, the act of preserving the language goes back generations.

“Every word that is in that word guessing game was remembered, and held onto by somebody who survived residential school and a host of other terrible policies that tried to eradicate the usage of that language,” he said.

Geel agrees, reflecting on her late uncle’s experience of being forced to attend a residential school.

“He was fluent [in Gitxsanimx],” she said. “But when he came back, he wouldn’t speak it anymore, because that was one of the things we weren’t allowed to do.”

That loss was then passed on to Geel’s generation.

“We talk about the colonization of the land, the language is one of the things that was taken away — there’s a reason why we don’t speak it fluently,” she said.

Theresa Stevens, a Gitxsan member from Galdo’o, who has been teaching Gitxsanimx for more than a year, says she grew up seeing classmates at the day school she was made to attend disciplined for speaking their language.

But, she said, her uncle and father continued to teach her so she could pass it on to future speakers.

“My dad was preserving the language through me, knowing that one day I’ll come back with a vengeance and be teaching the kids,” Stevens said.

While Stevens did not work on the Gitxsanimx Wordle clone, she thinks online games are a valuable tool for learning — she already posts lessons to social media, and she’s designing a Gitxsanimx version of the quiz show Jeopardy!’s online game edition.

Geel is hopeful that these sorts of games can contribute to the important work of undoing generations of loss caused by colonization.

“When you learn a language, you’re learning about a culture,” she said. “It’s a great opportunity.”

You`ve probably played it or have seen a score posted about it, but have you tried the Gitxsan versionÉ 4:23