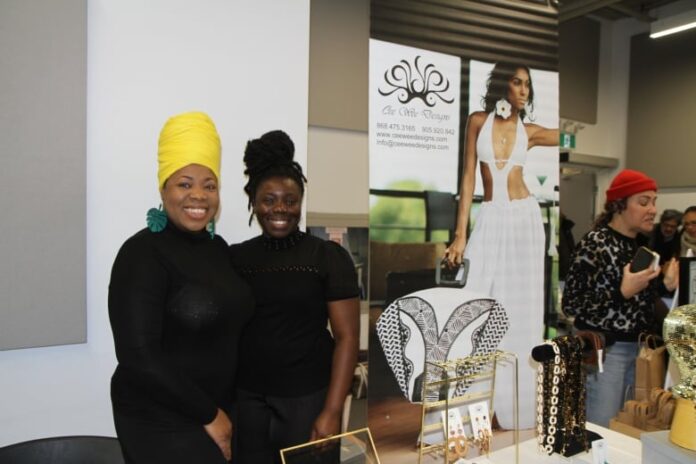 Even before starting her business, Cherie Warner-Richard said she had an “entrepreneurial bug.”

Growing up around her entrepreneurial grandmother and her “crafty” mother inspired her to become who she is today.

“I feel like they laid the foundation for me to be brave enough to take on this challenge,” said Warner-RIchard, who owns Cee Wee Designs, a bag and accessories store.

Cee Wee Designs was among businesses at the launch of the new Southwestern Ontario Black Entrepreneurship Network (SWOBEN), which aims to serve as a “dynamic resource for Black business owners, entrepreneurs and non-profit leaders” in the greater Hamilton and Windsor areas, according to their website.

From the island of Tobago to Hamilton

Warner-Richard said her business started back home in the island of Tobago around 10 years ago, when she made a bag for herself.

She said when people started asking if they could buy one from her, she was confused, but thought, “You want me to make one and you pay me for it?”

As more people asked, Warner-Richard started to realize it might not be such a crazy idea.

She started moving back and forth from Trinidad and Tobago to Canada eight years ago when she got married, and eventually stayed in Hamilton.

Today, she sells her bags and accessories on her website.

She said her home inspires her designs.

“I am from the Caribbean. We have a [bright] sun, we like bright colours … I like to create statement pieces. I want you to love your bag, your earrings, whatever it is.”

‘I was convinced I had something’

For Beko Mbeko-Edem, who was also at the SWOBEN launch event Dec. 5 in Hamilton, inspiration for his hot-sauce business Beko Foods Inc. also comes from family, as he grew up fascinated with cooking.

By age four, Mbeko-Edem was already helping out in the kitchen making brownies.

But it wasn’t until he visited Nigeria as a child that he was truly blown away by the process of bringing food “from farm to table.”

Mbeko-Edem graduated from Humber College in 2010 and decided he wanted to start a business.

“There was no representation of African food on a major level, or major scale. It wasn’t sought after in a way that was [accessible] to the public.”

He said he tried a couple of different things, but in 2017, his third business attempt was successful.

“One day I decided to make a pepper sauce. I didn’t really sell anything, because it was too hot.

“But I was convinced that I had something and just decided to say, ‘You know what — I’m gonna get this flavour out there.'”

His hot sauces are now sold in several locations across the Hamilton and Toronto areas, including the Nigerian restaurant Taste of Lagos, and through his own website.

A network for Black entrepreneurs

The SWOBEN launch event also served as a pop-up market.

“Our focus is to see how we can empower Black entrepreneurs to succeed in their field of business to become the best,” said Henry Elui, manager at Empowerment Squared, which leads the network.

The network was funded through a $1.9-million investment from the federal government to Empowerment Squared.

“I really hope as many entrepreneurs as possible are able to access the programs that they’re going to be offering,” said Warner-Richard.

She added that, in her case, making the bags is only half of the business.

“You still need to learn the skills to do your accounting and bookkeeping, to do your taxes or contracts. So I’m really looking forward to the courses that [SWOBEN] will be offering, and the assistance that they’ll be giving to entrepreneurs.”

“Entrepreneurship is a very lonely job, and the right advice doesn’t mean you can excel.

“So that’s what we want to achieve with this … our strategy is to work with different partners and advisers who consciously work with these businesses to accelerate their goals.”

Leo Nupolu Johnson, executive director of Empowerment Squared, said he hopes events like the one Dec. 5 “are not a one-off.”

“I’m hoping that we can leverage this opportunity to sustain it so that even after the lifespan of this program, the effort does not end.”