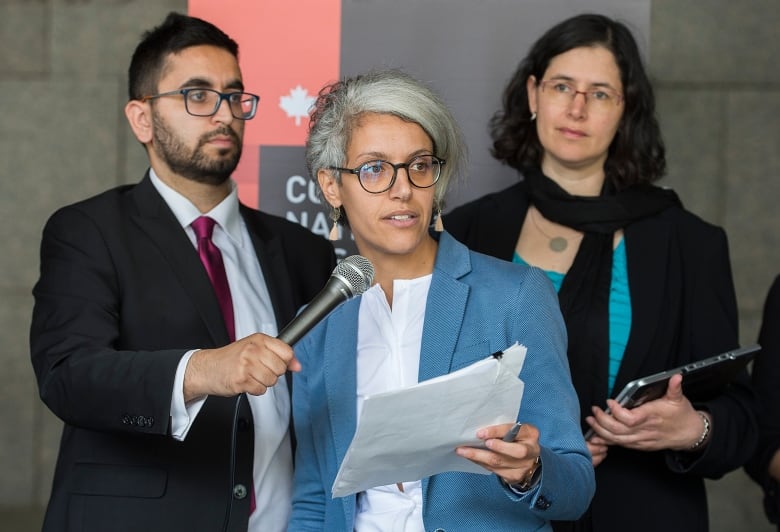 Quebec’s secularism law, which bans some civil servants from wearing religious symbols at work, is facing a new legal challenge.

The motion, a copy of which was provided to CBC News, aflso argues the law exceeds provincial jurisdiction and fails to live up to its own definition of laicity (Quebec’s version secularism).

“Fundamentally what the law does is take a rather crude and odious form of discrimination — which is to ban the wearing of religious symbols — and wrap up that ban in the language of human rights,” said Eric Mendelsohn, one of the lawyers representing the inter-faith group, Coalition Inclusion Québec.

The secularism law, also known as Bill 21, is already facing a separate constitutional challenge filed jointly by a Muslim advocacy group and a civil rights organization.

More legal challenges could be in the works. The English Montreal School Board voted this week to mount its own case against Bill 21 on the grounds that it violates minority language rights protected by the Canadian Charter of Rights and Freedoms.

Several polls taken after the law was passed in June suggest it is popular among francophone Quebecers. But its effects on Muslim women are only now becoming clear.

Under the law, public teachers, government lawyers and police officers cannot wear religious symbols at work. Since the start of the school year, several cases have been identified of women being turned away from teaching positions when they refused to remove their hijab (a grandfather clause doesn’t apply to those hired after March 27).

Others report dropping out of teachers college, while some have opted to remove their headscarves in order to keep their jobs.

The motion points to such cases in arguing the consequences of Bill 21 are felt mainly by Muslim women, and so runs contrary to Section 28 of the Charter, which guarantees gender equality.

Premier François Legault’s government has, in the past, rejected claims that the law is unfair to women by saying it doesn’t single out any particular religion or gender.

Though the Quebec government invoked the notwithstanding clause to shield the law from claims it violates basic Charter rights, Section 28 isn’t subject to the clause.

The other arguments contained in the motion also don’t rely on the sections of the Charter that are subject to the notwithstanding clause.

For instance, the motion cites the religious freedom principle contained in the Quebec Act of 1774; a freedom that exists independently of the Charter, its argued.

The claim the Quebec government violated federal jurisdiction in passing the law is based on a reading of the sections on division powers in the Constitution.

“A provincial legislature just doesn’t have the authority to entrench a preference for the absence of religion, to entrench the disapproval of religion, as a fundamental constitutional norm,” Mendelsohn said.

And finally, the motion argues Bill 21 is so riddled with contradictions that it is impossible to apply fairly.

The law defines laicity as including equality, freedom of religion and state neutrality. But by banning religious symbols, Bill 21 violates its own definition of laicity, Mendelsohn said.

Put another way, the lawyers are trying to use the law’s own wording against it.

Bill and the federal election campaign

It will likely be several months before the motion receives a hearing in Quebec Superior Court. Before then, though, government lawyers will have to defend the law against the other constitutional challenge.

An application for an immediate stay of the law, filed as part of the original motion from the two civil rights groups, was rejected during the summer. That decision will be appealed in November.

With the law’s constitutional status under scrutiny, Legault demanded earlier this month that campaigning federal leaders commit to staying out of the court proceedings.

Only the Liberals have avoided making that promise; leader Justin Trudeau said he wants to leave that option open to the federal government.

Mendelsohn declined to comment on whether he hoped federal leaders would pledge their support for the Coalition Inclusion Québec court case.

“I don’t want to make a political statement,” he said. “But I would remind everyone, politicians included, that human rights, and human rights documents … are about protecting minorities, protecting vulnerable people from powerful majorities.”