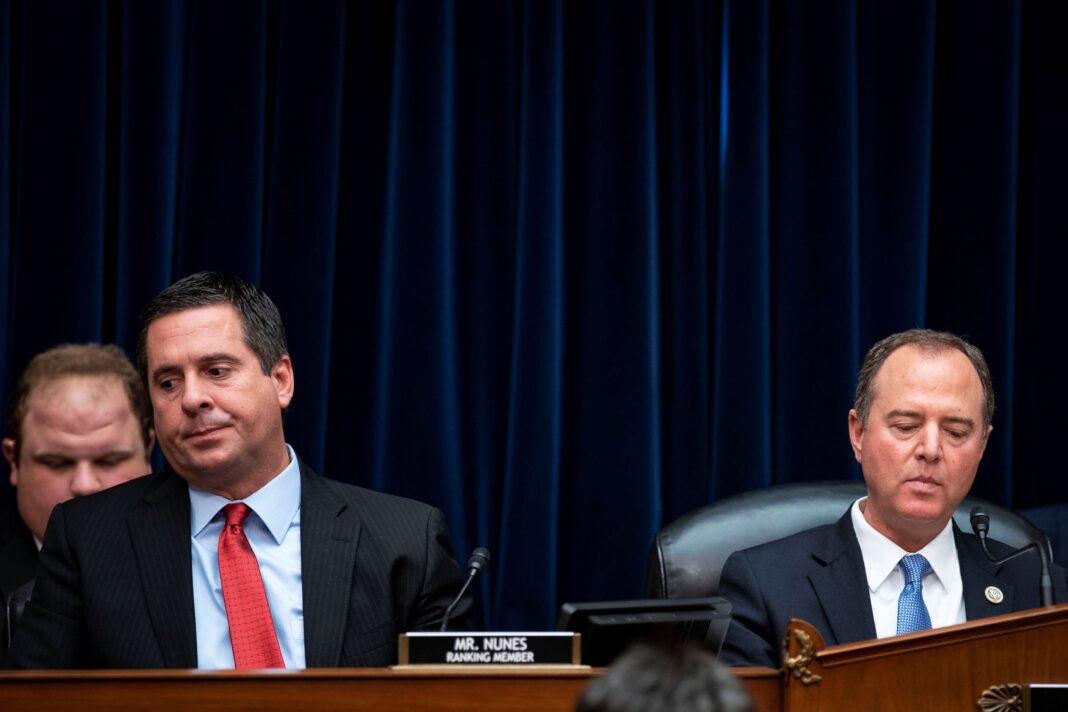 WASHINGTON ― It’s been one week since most of Capitol Hill heard the first reports of a whistleblower, and with new developments almost every day since, Republicans and Democrats are still wrapping their heads around how much the impeachment dynamics have flipped.

In a week, House Democrats have moved from a drawn-out investigative approach to near-unanimity on impeachment proceedings. For them, it’s no longer a matter of whether they’ll impeach President Donald Trump; it’s when and by what charges.

House Speaker Nancy Pelosi (D-Calif.) has gone from the impeachment push’s biggest obstacle to its greatest asset, with her former reluctance now a rhetorical benefit in emphasizing just how out of bounds Trump’s behavior was in his July 25 phone call with the leader of Ukraine.

There are still some Democrats who have remained silent on an impeachment inquiry or have even spoken against it. Rep. Jeff Van Drew (D-N.J.) told reporters Wednesday that he’d rather leave the issue alone. Rep. Collin Peterson (D-Minn.), who ignored our questions about the phone call Wednesday, still maintains that impeachment would be a “failed process.”

But other than a handful of vulnerable lawmakers, Democrats are on the same page: The president committed a serious wrongdoing when he asked a foreign leader to investigate one of his chief political rivals, Joe Biden, and the proper remedy is impeachment.

“There’s really unanimous consent in our caucus ― or virtually unanimous ― that we need to focus on this, the Intelligence Committee needs to be committed to completing their investigation, and once they do, they will transfer a report or recommendation to the Judiciary Committee,” Rep. David Cicilline (D-R.I.), chair of the Democratic Caucus’s messaging arm, told reporters Thursday night.

Cicilline added that he believed there was already “sufficient evidence” to impeach Trump. “That’s why I don’t expect this to be a very long process.”

Multiple Democratic lawmakers mentioned Thursday wrapping up this process by the end of the year, potentially to avoid the charge that the House impeached Trump in an election year. A few months would be long enough for the House Intelligence Committee to conduct its investigation but short enough that Democrats could keep the momentum of the scandal and attention of voters. And though Democrats still have work to do in convincing the American people, support for impeachment is already growing.

Meanwhile, on the Republican side, members are all over the place.

Some say they haven’t read the whistleblower complaint released Thursday (or, worse, still haven’t read the summary of the call between Trump and the Ukrainian president that was released Wednesday). Some Republicans said there is absolutely nothing wrong with anything the president did, that Democrats owe Trump an apology or even ought to be thanking the president. Other Republicans step on that narrative by admitting that, no, actually, maybe there is something to these charges ― splitting the difference by expressing some unease with the situation but arguing it doesn’t rise to the level of impeachment.

Still, the loudest voices are from the Republicans who insist Trump has done nothing wrong.

Republicans are seizing on one line in the complaint to undermine the whistleblower’s credibility: “I was not a direct witness to most of the events described.”

The whistleblower said he had more than a half dozen White House sources whose accounts matched each other, plus publicly available information. But Republicans have already left the room.

“It’s nonsense,” Rep. Kevin Brady (R-Texas) said. “This is just a scam as far as an excuse for impeachment.”

When we asked Rep. Peter King (R-N.Y.) if he was concerned by anything in the whistleblower’s complaint, he said he was concerned that something with “third- and fourth-degree hearsay would make it that far.”

When we pressed King about whether the allegations would be concerning if they were true, he agreed they would be. “But I just can’t ― I don’t see how it all fits together.” And when asked about key facts in the complaint matching up with the rough transcript of the call, King said the transcript was “fine.”

Mario Diaz-Balart (R-Fla.) also focused on the whistleblower not being a firsthand witness. “So you have folks that were witnesses that didn’t complain, and you have a person who wasn’t there complaining?” Diaz-Balart asked. “I think that’s pretty much all you need to know.”

You know what we used to do in the old days when we were smart with spies and treason, right?
President Donald Trump

Try as they might, however, the Republicans’ effort to tar the complainant’s credibility hit a snag Thursday when Joseph Maguire, the acting director of national intelligence, testified that he agreed with the intelligence inspector general’s assessment that the document was “credible.”

Sen. Chuck Grassley (R-Iowa), a leading advocate for whistleblower rights, also spoke out in support of the unnamed person. He said he was “going to believe he’s a whistleblower until I hear some lawyer explain to me why he isn’t.”

GOP attempts to undermine the whistleblower at the hearing with Maguire also fell flat, as the acting DNI was able to lay out how the whistleblower had followed all the proper procedures in reporting the concerns of White House employees. Rep. Chris Stewart (R-Utah), who told HuffPost on Wednesday that the rough transcript of the call had given him “a little pause,” said his colleagues were “nuts” if they thought attacking the character of the whistleblower was a good strategy.

The president called the whistleblower “crooked” and suggested his sources for the complaint were acting like spies who ought to be executed.

“You know what we used to do in the old days when we were smart with spies and treason, right?” the president said.

The complaint is damning for a number of reasons. For one, it matches the loose transcript that was released Wednesday. For another, it details a cover-up in the White House. Aides recognized that the conversation Trump had with Ukrainian President Volodymyr Zelensky was politically explosive, so they moved the memo onto a more secure and secret server to limit how many people could see the conversation.

The complaint also alleges that it was Ukraine’s understanding that it needed to “play ball” and agree to open an investigation into Biden in order to get Trump on the phone with Zelensky, who hoped Ukraine would receive nearly $400 million of military aid that Congress had appropriated and Trump had held back.

But Republicans seemed to have locked on Thursday to only one major aspect of the Ukraine scandal: Biden.

Rep. Morgan Griffith (R-Va.) said Biden, while vice president in 2015 and 2016, had threatened to withhold $1 billion from Ukraine unless the country fired then-chief prosecutor Viktor Shokin. That part is true. Biden and a number of other world leaders pressured Ukraine to fire Shokin over allegations of fraud by the prosecutor. It’s also true that Biden’s son Hunter was sitting on the board of a Ukrainian energy company at the time.

Where the stories diverge is whether Biden pressured Shokin to resign because he was investigating the company that Hunter was involved in or because other world leaders were also pressuring Ukraine over Shokin. Documents show that Shokin wasn’t actively investigating the energy company. But Republicans are arguing Biden shouldn’t have been part of negotiations at all.

“He should have recused himself because his son was involved,” Griffith said. “And the subsequent president of the United States says, ‘Hey, you might want to investigate that.’ That’s appropriate, and it’s for the betterment of the ends of justice.”

Griffith added: “Anybody who’s calling for impeachment of the president over this needs to ask Joe Biden to get out of the race.”

That’s certainly a line the White House likes. And many Republicans are doing their best to frame this as an indictment of Biden and circle the wagons for Trump.

They don’t give any space for the other Republicans to say anything without looking like they’re betraying the president and the party.
Rep. Justin Amash (I-Mich.)

But underneath those very loud voices, there are Republicans who are quietly watching how this all plays out.

When we asked the former House GOP campaign chair whether there was a split of opinion among Republicans on the Ukraine situation, Stivers said that was right.

“There’s a split on it, but we’re not monolithic on a lot of stuff,” he said.

Another GOP lawmaker, who asked to remain anonymous, said there was a group of Republicans who are consciously not jumping to the president’s defense. “We have to see how this plays out,” the Republican lawmaker said.

Rep. Justin Amash of Michigan, who was a Republican until July, when he left the party to become an Independent, told HuffPost that he knew of Republicans who would like to speak out. “But they feel they’re screwed if they come out and say anything about it.”

“What happens on the Republican side is that the White House, in coordination with a few Republican officials, go out there and try to press a really aggressive message that ‘the president hasn’t done anything wrong,’ ‘it’s all about Biden,’ etc., etc.,” Amash said. “And they don’t give any space for the other Republicans to say anything without looking like they’re betraying the president and the party.”