Quebec’s environmental movement has had a long string of victories. What’s the secret to its success? 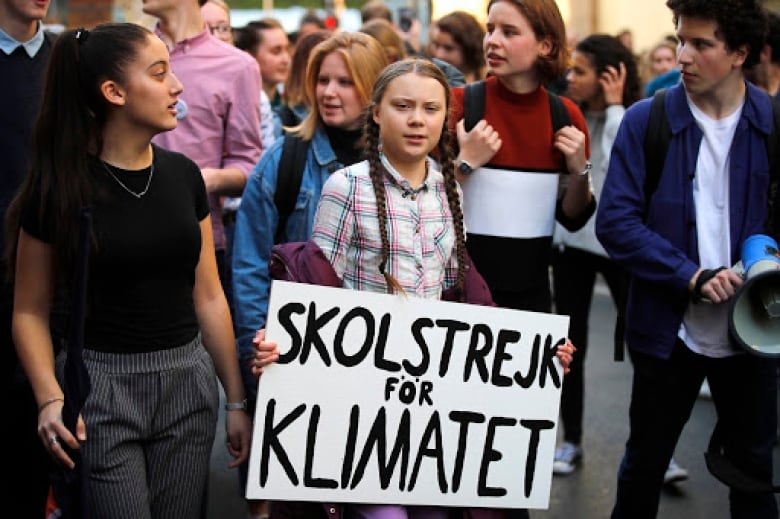 Since the spring, hundreds, maybe thousands, of Quebec teens have been meeting after school to lay the groundwork for a massive protest in Montreal demanding urgent action on climate change.

When it gets underway Friday at noon, led by 16-year-old activist phenomenon Greta Thunberg, it’s expected to be the largest demonstration in the history of Quebec’s environmental movement.

Not that the movement has struggled to get people in the streets. A march in Montreal last spring attracted more than 100,000 people; there were 50,000 at a protest following last year’s provincial election.

But the strength of the environmental movement in Quebec goes beyond its ability to organize sizeable demonstrations.

That outlook has translated into a desire for federal politicians to address the issue.

Nearly 40 per cent of Quebecers who took part in CBC’s Vote Compass survey listed the environment as their most important issue of the current election campaign, more than in any other region in the country.

Among Quebec respondents, the environment outstripped the economy, health care, taxes and every other issue.

So why have Quebecers come to care about environmental issues more than other Canadians (even if they don’t always act on that concern)?

The benefits of ‘blue gold’

Many environmentalists in the province feel their cause benefits from commonplace expressions of Quebec nationalism that invoke a special relationship with the environment.

Quebec’s “blue gold” — water — plays an important role in the story of how the province modernized: It was the nationalization of Hydro-Québec that helped spark the Quiet Revolution.

“Quebecers are proud of hydro power because it is a symbol of when Quebecers, who had been poor for 200 years, decided to build a modern society and seize control of their economy,” said Karel Mayrand, Quebec director of the David Suzuki Foundation.

Hydroelectricity turned out to be an energy source that emits much fewer emissions than coal, gas or oil.

At a moment when energy is central to provincial identities in Canada, Quebecers have been quick to boast of the environmental upsides of their main power source.

And efforts by Hydro-Québec to diversify its supply beyond hydro power have often been met with resistance.

Indeed, one such effort — a plan to build a natural gas power station in Beauharnois, near Montreal — was an important catalyst for the current wave of environmental activism in the province.

Chalking up the wins

The Beauharnois project was floated in the early 2000s amid some debate about how Canada would meet its obligations under the Kyoto Protocol, which required countries to begin lowering their greenhouse gas (GHG) emissions.

Much to their surprise, that argument struck a chord with the wider public. Opposition to the project grew progressively louder, eventually forcing the government to nix it.

“There was this uprising within the population that was quasi-spontaneous,” recalled Patrick Bonin, who took part in the protests against the natural gas project and is now a climate campaigner with Greenpeace Canada.

“It was one of the great environmental victories that showed that with the force of mobilization, we can change things,” he said.

In 2006, the provincial Liberal government took steps to privatize a provincial park. The project was shelved amid protest.

When gas companies sought to exploit shale gas formations along the St. Lawrence River, protests prompted the government to impose a moratorium in 2011.

In 2013, the province killed another resource project — a planned methane gas plant near Quebec City — again amid noisy protests from an alliance of citizens groups and environmental activists.

So, when TransCanada sought approval to build a cross-Canada pipeline through Quebec in 2014, it was confronted with an environmental movement that had a decade’s worth of successful activism already under its belt.

With each new victory, more people were brought into the movement, convinced of the merits of environmental activism, said Bonin.

That optimism is evident among the younger generation of activists.

“We believe that we can actually win, which is one of the reasons we’re more motivated,” said Ben Clarkson, a spokesperson for La Planète s’invite au Parlement, one of the groups organizing Friday’s climate march whose name translates as “the planet goes to Parliament.”

One reason for the success of those campaigns against specific resource projects was that they were accompanied by broader efforts to educate Quebecers about climate change.

“People came to understand that activism could not only block projects but could also propose solutions,” said Bonin.

He credits these awareness campaigns for laying the groundwork for early government initiatives to reduce emissions.

In 2007, Quebec became the first jurisdiction in North America to implement a carbon tax.

The tax was phased out in 2014 as the province switched to a cap-and-trade system; it’s currently the only province to use this method of carbon pricing.

A number of cultural factors have also helped environmental activism flourish in Quebec.

Mayrand said environmental measures like carbon pricing enjoy more support in part because Quebecers are used to government intervention in the economy.

In Western Canada, “climate action is seen as a Trojan horse for more taxes and more government intervention in the economy and people’s lives,” he said. “In Quebec, people expect the government to solve problems.”

Another factor that helps activists in Quebec is what, elsewhere, is called its “distinct society.”

As residents of a francophone province, somewhat removed from the rest of Canada, activists find it easier to collaborate with each other and with non-traditional allies such as business groups.

“Quebec is a smaller society, and maybe it’s a little more cohesive because it’s smaller,” said Mayrand. “The kind of social dialogue that we can have in Quebec makes it a lot easier to collaborate.”

Those cultural differences can exert themselves in other ways, too. A study published in 2012 found that coverage of environmental issues differed significantly in Quebec from the rest of Canada.

The study found that whereas French media in the province largely accepted global warming as fact, English outlets were “happy to include claims of denial, scientific uncertainty and pro-business narratives in climate change reporting.”

As it has around the globe, the level of mobilization in Quebec increased dramatically following the publication last October of the UN Intergovernmental Panel on Climate Change report, which concluded there are only 12 years left to keep the planet from warming beyond 1.5 C above pre-industrial levels.

“That really alerted citizens to the urgency of acting within the next decade,” said Catherine Gauthier, who heads the group Environnement Jenesse (ENJEU), which helps young people get involved in climate action.

“I’ve been involved in the movement for 15 years, and I’ve never seen it this strong.”

Environmental activism in Quebec is now coming from just about every corner of society, with artists, municipalities and, above all, students driving the most prominent initiatives.

Several high schools in Montreal have cancelled classes on Friday, as have some universities and colleges, bowing to the desire of students to join the climate march.

“The fact the youth are leading is changing things fundamentally,” said Mayrand.

Big environmental groups, such as Greenpeace and the David Suzuki Foundation, have shifted to playing a supporting role for this new generation of climate activists.

“Right now, they are the energy behind the movement. It’s theirs, not ours,” Mayrand said.