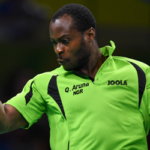 The beach city of Morocco, Agadir will today come alive as the best table tennis players in Africa converge for the 2017 ITTF Africa Cup.

Being the only biggest table tennis tournament in Africa this year, the championships serve as qualifications for the ITTF Men and Women World Cups with participants eyeing Africa’s slots in men and women events.

Already, defending champion – Egypt’s Omar Assar has been seeded number one in the men’s singles while Africa’s most popular star, Nigeria’s Aruna Quadri is second on the seeding list released by the technical department of ITTF Africa.

All eyes will be on repeat clash between Omar Assar and Aruna Quadri, who are fierce rivals in Africa and their encounter has always been a delight and a good advertisement for the sport in the continent.

For Omar Assar, this year’s title remains a target for him. ““Morocco is a very special country for me because I have golden memories there. I have been lucky to win many competitions there but I am still very hungry to win and perform very well in Morocco this year ‘Insha Allah,” the 2915 African Games gold medallist said.

Describing how vital the tournament is to him, Assar added: “The ITTF Africa Cup is a very special competition for me as it is the only African title I had won once. For sure I would love to add it to my collection so I am trying to be 100 percent for the tournament in Morocco this year.”

For Aruna Quadri, the Egyptians remain the only stumbling block to his ambition. “ITTF Africa Cup is another challenge that I am looking forward to and I am preparing very well for it. I know it is not going to be easy and I know it is very possible to win again in Morocco having won my first continental title in 2009 in same Morocco. Since I have finished with my club in the French league, I have enough time to prepare well in training. I am training now more than before and I believe it is going to be a very fantastic tournament. I am eagerly looking forward to give my best and represent Nigeria very well,” the 2014 ITTF Star Player said.