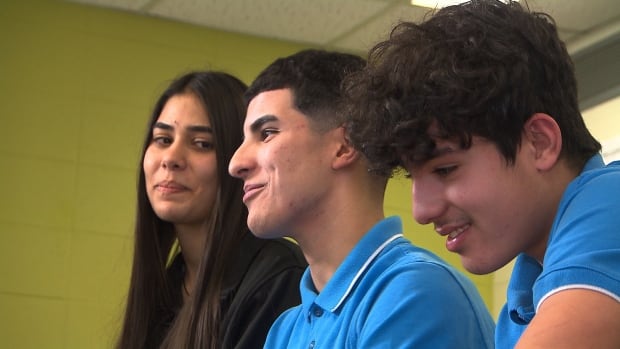 Three students from Georges-Vanier high school in Montreal are being hailed as heroes after using a defibrillator on a teacher in respiratory distress.

Brothers Massinissa and Gaya Berrouche, 16, and Leya Nahra, 17, were in school on Dec. 4 when a French teacher suddenly lost consciousness during class. Another teacher ran to nearby classes to look for help.

The three Grade 11 students, who have all undergone first aid and CPR training, rushed to her side.

“My brother and I are lifeguards, so we went to her class,” explained Massinissa.

“I thought it was a joke,” said Gaya, Massinissa’s twin brother. “Then I saw my brother starting to run. When I saw the teacher’s face, I realized it wasn’t a joke.”

“We saw that she wasn’t breathing,” said Leya. “I was really scared, but I told myself, ‘OK, put everything else aside, you’ve got to help.'”

The students thought the woman might be choking and began performing CPR.

When the school’s vice-principal, François de la Sablonnière-Tremblay, heard there were students in the room, his first thought was to get them away from the scene.

But upon arrival, he said he quickly realized that the teens were in control of the situation.

“They were communicating, ‘look at that,’ ‘turn her over,’ they knew what they were doing,” he said.

School nurse Nadine Crête rushed to the classroom after someone called for the defibrillator over the school’s intercom. The machines have been mandatory in Quebec high schools since September.

She set up the machine and waited for the students to say when they needed a shock.

They continued to perform CPR and use the defibrillator until first responders arrived.

The 65-year-old teacher was rushed to a hospital, where she is doing better, Crête said.

“Every minute counts. That made all the difference,” she said.

The students said that anyone in their shoes would have done the same thing.

“You see a woman on the ground, it’s normal to try to help,” said Massinissa.

“My dad, my family taught me that if someone needs help, you help them,” Leya agreed.

The teens thanked their parents for enrolling them in first aid classes and said it highlighted the importance of knowing CPR.