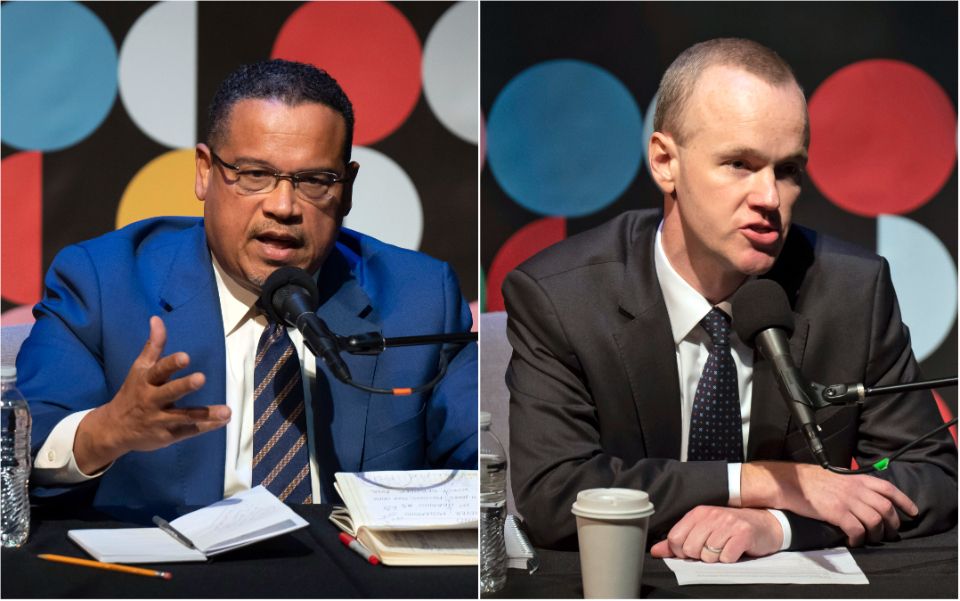 By Terry Paul
October 24, 2022
Minnesota Attorney General Keith Ellison (D) defended himself against charges that he supports police funding cuts and accused his Republican challenger, Jim Schultz, of posing a threat to abortion rights in their fourth and final debate on Sunday night.

“I’ve asked for literally millions of dollars over the course of four years of my term so that we can put violent criminals in prison when counties call on us to do it,” Ellison declared in the debate, which was hosted by KSTP-TV.

“Defunding the police was never a good idea and it was even worse phrasing,” he added later in the debate.

Ellison, a former public-interest lawyer, state lawmaker, and member of Congress, has indeed never supported defunding the police. “I don’t think the binary is pro-police/anti-police,” he told HuffPost for a June 2020 profile.

But Schultz blasted Ellison in particular for supporting a “yes” vote on Question 2, a 2021 referendum in Minneapolis that would have replaced the city’s police department with a more multifaceted department of public safety.

Ellison noted that Fox 9, a local TV station, has called efforts to conflate support for the passage of Question 2 with “defunding” the Minneapolis police force “misleading.”

“What people in Minneapolis were looking for is a better way forward,” he said.

If the referendum had passed, Minneapolis would have been free to implement a more public-health-driven approach to tackling crime that advocates hoped would combine traditional law enforcement techniques with more progressive outreach methods. The city would no longer have been required to maintain a certain ratio of police officers per population, but the city council would have been free to allot as much funding for officers as it wanted.

Many other prominent Minnesota Democrats, including Gov. Tim Walz (D) and Minneapolis Mayor Jacob Frey (D), nonetheless advocated against Question 2 and it ended up being defeated by 14 percentage points.

Ellison, by contrast, joined more left-leaning figures like Rep. Ilhan Omar (D-Minn.) in supporting the referendum’s passage. Omar and Rep. Cori Bush (D-Mo.), who campaigned for Ellison earlier in the week, have embraced both the “defund the police” slogan and the underlying call to reduce police funding in favor of other social programs.

“The fact is, Keith Ellison is on an island with a few radicals around the country,” Schultz said. “And that’s representative of how extreme he is in Minnesota.”

Schultz also sought to blame Ellison for failing to do enough to stem the uptick in violent crime in Minnesota, claiming that Ellison has “sat on his hands” amid the surge in crime.

“My opponent has never set foot in a courtroom and is basically just fear-mongering,” he said.

If Schultz has tried to make crime the theme of the campaign, Ellison has focused on abortion rights, where he believes he has an advantage over Schultz.

He maintains that Schultz cannot be trusted to protect Minnesotans’ right to a “safe, legal” abortion.

Ellison noted that Schultz has served on the board of the Human Life Alliance, an anti-abortion group, and promised during the GOP primary to “go on offense, offense, offense” against abortion rights if elected.

Schultz claimed that he would not let his anti-abortion views get in the way of defending Minnesota’s existing abortion rights protections in court.

“I said [during the primary] that I will not leverage the Attorney General’s Office of Minnesota for abortion policy,” he said. “I said that openly and people on the right attacked me and now Keith is attacking me from the left.”

Ellison warned people against believing Schultz’s assurances, comparing them to those of conservative Supreme Court justices who suggested, as nominees, that they would uphold a constitutional right to abortion but voted to overturn it this past June with the decision in Dobbs v. Jackson Women’s Health Organization.

“All of them said they will preserve the right to abortion. They all flipped it,” Ellison said. “He’s going to do the same thing.”

After a hard-fought election win in 2018, Ellison earned national fame for his role in the successful prosecution of Derek Chauvin, the former Minneapolis police officer convicted of murdering George Floyd in May 2020.

But nearly two and a half years after Floyd’s death, a national rise in violent crime that has not spared Minnesota has put Ellison on the defensive.