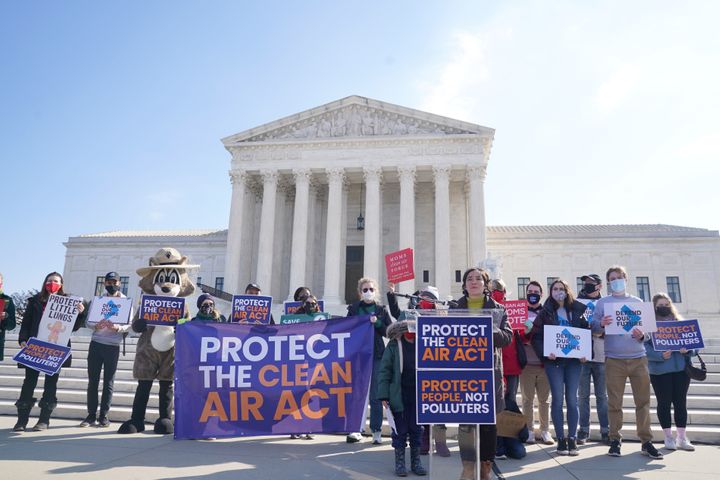 The Supreme Court just made it much harder for the U.S. government to respond to climate change in a 6-3 decision in the case of West Virginia v. EPA.

The Thursday decision, written by Chief Justice John Roberts and joined by the other five conservative justices, preemptively strikes down any regulations the Biden administration might consider issuing under a provision of the Clean Air Act to limit carbon emissions at power plants.

The court ruled that EPA regulations aimed at reducing carbon emissions under a specific provision of the 1970 Clean Air Act are not permissible because Congress did not specifically authorize the EPA to regulate CO2.

Carbon functions differently from other air pollutants power plants spew, such as mercury or acid gasses, in that it harms human health primarily by accumulating in the atmosphere and warming the planet. As such, the EPA tried under the Obama administration to regulate power plant emissions by encouraging plant operators to limit emissions across the board, not just from individual facilities.

According to the court, the EPA has the authority to regulate individual plans, but not to make more sweeping efforts to regulate carbon emissions – that has to come from Congress.

The court’s decision follows the expanding logic of its so-called “major questions doctrine.” The doctrine states that the Supreme Court can strike down regulatory action of “vast economic and political significance” if Congress did not specifically delegate a rule-issuing agency to issue that regulation.

“This is a major questions case,” Roberts writes. “EPA claimed to discover an unheralded power representing a transformative expansion of its regulatory authority in the vague language of a long-extant, but rarely used, statute designed as a gap filler. That discovery allowed it to adopt a regulatory program that Congress had conspicuously declined to enact itself. Given these circumstances, there is every reason to ‘hesitate before concluding that Congress’ meant to confer on EPA the authority it claims.”

Capping carbon emissions from power plants “may be a sensible ‘solution to the crisis of the day,’” Roberts writes. But, he continues, “it is not plausible that Congress gave EPA the authority to adopt on its own such a regulatory scheme.” Instead, a regulation of “such magnitude and consequence rests with Congress itself.”

This expansive use of the major questions doctrine threatens to resurrect the court’s rarely invoked “nondelegation doctrine.” The nondelegation doctrine claims that executive branch agencies cannot update and write new regulations unless Congress specifically delegates that authority to them. The court most famously invoked this doctrine to strike down two New Deal programs in the 1930s. Since then, the court has long relied on other interpretations of law and its own precedents to let Congress delegate rule-writing authority to executive branch agencies without the kind of precise delegation that the doctrine would require.

While not fully resurrecting nondelegation, the court will now no longer just assume that Congress has delegated authority to the agencies. Instead, the major questions doctrine allows the court to pick-and-choose for itself which regulations rise to questions of “vast economic and political significance.” This could have significant implications for many executive branch agency regulations, including any that further regulate carbon emissions.

Justice Elena Kagan pointed out the potentially arbitrary nature of the major questions doctrine in her dissenting opinion, which was joined by Justices Stephen Breyer and Sonia Sotomayor.

That the case revolves around efforts to combat climate change is “all the more troubling,” according to Kagan. The court, she writes, “does not have a clue about how to address climate change.”

“The Court appoints itself—instead of Congress or the expert agency—the decisionmaker on climate policy. I cannot think of many things more frightening,” Kagan states.

The Supreme Court decision results from years of litigation over the issue of carbon emission regulation across three different administrations, all centered on an obscure clause of the Clean Air Act.

The Obama administration used the law’s Section 111D to justify rules in the Clean Power Plan, its signature plan to cut carbon from electricity-generating stations, spurring utilities to shift production from high-emitting plants to more efficient ones. But opponents of regulation accused the White House of misinterpreting legal language they said only gave the EPA the right to dictate what power station owners could do within the facility’s “fenceline.” The Clean Power Plan gave companies options “beyond the fenceline” to comply with the rule by building renewable energy farms or running lower-emitting plants to offset dirtier coal-fired stations.

The Obama EPA’s interpretation was “a reach,” said Brendan Collins, a partner at the Philadelphia-based environmental law firm Ballard Spahr. But the policy was really meant to be a stopgap that would give utilities more flexibility until carbon capture technology — hardware that can be retrofitted onto the smokestacks of a plant to collect and store carbon gas before it enters the atmosphere — became feasible enough to mandate.

“At the end of the day, if EPA isn’t ready to say carbon capture is a technology that’s sufficiently feasible from a technical and financial standpoint that it can impose that obligation, then the best thing you can do is use less coal to make the same amount of electricity,” said Collins, whose firm’s clients are not involved in the case.

Whereas the Clean Power Plan gave multiple options for achieving that outcome, including by giving utilities the right to shift generation from dirtier to cleaner plants, the Trump administration’s Affordable Clean Energy, or ACE, rule narrowed the regulation’s scope, requiring power station operators to make coal-fired units more efficient. The rule actually gave plant owners an incentive to burn more coal, as long as the generators in use were more efficient.

Had the Trump administration stopped at just withdrawing and replacing the Clean Power Plan, there might not be a case here today. But the Trump-era EPA specifically argued that its interpretation of Section 111D as limiting federal authority to the area “within the fenceline” was correct.

“The political reason was to lock in the victory,” Collins said. “But the Trump administration did not hedge. They did not say, ‘We can only do this, and even if we could do more and had the discretion to make that choice, we exercise discretion to only do this because we think that’s the most technically feasible choice.’ No. They went for it all by saying, ‘We must do no more than this, and we cannot do more than this.’”

The U.S. Court of Appeals for the District of Columbia Circuit struck down the ACE rule on those grounds, ruling that Section 111D does, in fact, grant the EPA authority beyond a facility’s fenceline.

In disagreeing with the D.C. Circuit, the Supreme Court has largely left the EPA where it started. The Clean Power Plan was already rescinded, and the Biden administration has said it would not revive the regulation. The ACE rule was already struck down, and the Biden administration said it would not reinstate the regulation. And the EPA has yet to announce what it plans to propose in place of the ACE rule.

Given how much legal doubt the Obama administration’s use of Section 111D caused, few policy observers expected rulemakers at Biden’s EPA to rely on that same statute this time around.

“There isn’t going to be any effect on power plants from this case, win, lose or draw,” Collins said ahead of the decision.

But Collins said to expect that the Biden administration’s forthcoming power plant plan will be far more aggressive as a result of West Virginia v. EPA. Stripped of its ability to offer a similar menu of compliance options, the agency will likely have to rely more heavily on emissions cuts directly at facilities. In other words, new solar panels or more use of a gas plant won’t bail out a coal-fired power station; the plant would have to either capture its emissions or shut down.

That, he said, is why the plaintiffs in West Virginia v. EPA were primarily a coal-mining company and Republican states.

In a footnote on the conservative majority’s opinion, the decision stated that EPA does not have the authority to “direct existing sources to effectively cease to exist,” and thus “we doubt it could” enact measures “simply requiring coal plants to become natural gas plants.”

The EPA is required to regulate carbon emissions under the Clean Air Act as a result of a doctrine known as the “endangerment finding.” The finding, which took effect in 2010, officially designated planet-heating gases as pollutants that reach the Clean Air Act’s threshold for harming human health.

Rescinding that finding would, experts say, require EPA lawyers to disprove the reality of climate science in court. The extreme unlikeliness of that outcome may be why the Trump administration resisted calls from allies to target the finding.

Legal recognition of the danger that greenhouse gases pose does not dictate a prescription for how to reduce them. That ambiguity gave the Trump-era EPA the authority to enact a power plant regulation that, according to models, would fail to cut emissions at the rate U.S. government scientists said was necessary to avoid catastrophic warming.

The systemic shifts in energy use required to keep global temperatures from rising to extreme levels under most mainstream climate models would already amount to an unprecedented economic overhaul. With each passing year, the degree of change that’s needed grows ever more drastic.

But based on the court’s logic in the West Virginia case, it may well find that any other regulation issued by the EPA to limit carbon emissions without specific instruction from Congress violates its major question doctrine. With Congress polarized on whether or not to even respond to climate change, let alone how, the court may well have cut off major avenues for regulation.

In the meantime, U.S. emissions are on pace to spike again this year.