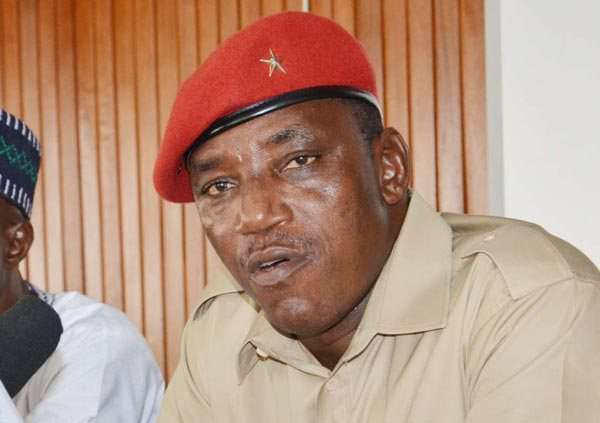 A statement issued by Nneka Ikem-Anibeze said that the minister, who led Federal Government’s delegation to cheer the Super Eagles, said the team blew its chances of qualifying for the round of 16.

Solomon Dalung, Minister of Youth and Sports on Wednesday described Nigeria’s 1-2 loss to Argentina as unfortunate.

A statement issued by Nneka Ikem-Anibeze said that the minister, who led Federal Government’s delegation to cheer the Super Eagles, said the team blew its chances of qualifying for the round of 16.

According to Dalung, the loss was painful to Nigerians who felt it was a game that should have been easily won with everything going for the team until the  dying moments of the match.

“I wish to apologize for disappointing Nigerians by  our early exit from the  World Cup, leaving many football loving fans devastated.

“We know the passion and football followership of  Nigerians, but it is unfortunate that we couldn’t make it even to the next round.

“The players did their best in this game but the technical glitches cost us a second round ticket.  How we couldn’t hold the ball for the last five minute is still a shock to us.”

Dalung attributed the loss to poor game management on the part of the technical crew and inexperience of the young team.

He said that the team would need more experience in future from a more technically sound tactician.

“I have interacted with Nigerians here in  Russia and it appears the  technical crew could not manage the 1-1  draw with just five minutes left.

“It is time to go back to the technical committee and technical department for future assignments.

The Minister advised that attention must now be turned to the Africa Cup of Nations Qualifiers as he urged the NFF to leave no stone unturned in ensuring that the team qualifies for the tournament.

“We just need to analyze what went wrong, take the positives, learn the vital lessons for future purposes and then move on.”