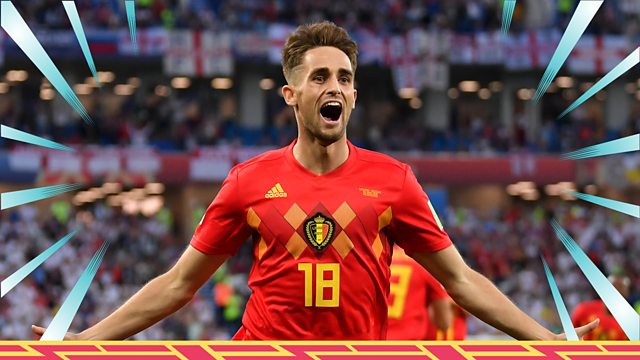 England will face Colombia in the last 16 of the World Cup after a spectacular strike by Adnan Januzaj ensured Belgium finished top of Group G.

Gareth Southgate made eight changes from England’s win against Panama, while opposite number Roberto Martinez made nine alterations – proving victory was not exactly the top priority as the tournament moves towards the knockout phase.

That was illustrated by a largely mediocre, lifeless encounter in Kaliningrad that was settled by Januzaj’s goal six minutes after the break, the former Manchester United attacker cutting inside before curling a left-foot finish high past Jordan Pickford.

Southgate must now reflect on England’s first loss at this World Cup as he prepares to face the dangerous Colombians in Moscow on Tuesday at 19:00 BST, while Belgium go to Rostov to play Japan on Monday.

England can now plot their route ahead

The build-up to this game was played out in the context of who would top the group – with the suggestion finishing second might provide an easier route than winning Group G.

It was clear three points was hardly the top priority for either manager, and the changes occasionally threatened to reduce the game to a farce – the first half ending in a chorus of jeering.

Should England beat Colombia, led by striker Radamel Falcao, there is the prospect of facing either Sweden or Switzerland.

But the South Americans will pose a real threat and only time will tell if England and Southgate will regret not going harder for the greater glory of victory.

Southgate kept Kane back for bigger battles ahead – but this laboured, unthreatening defeat him with much food for thought.

Jamie Vardy and Rashford were entrusted with attacking duties. They both worked hard but England’s lack of penetration only emphasised their heavy reliance, some would argue over-reliance, on the captain and talisman.

Kane is the tournament’s leading scorer with five goals and has not yet been the beneficiary of a reliable supply line, two goals resulting from corners, two from penalties and another a deflection from Ruben Loftus-Cheek’s shot to complete his hat-trick in the 6-1 win against Panama.

He is the central figure in England’s World Cup ambitions, the leader on and off the pitch and a striker every defence at this tournament would be anxious about facing.

Southgate’s reluctance to throw Kane into the action, even when England were losing and posing little danger, was perhaps an even bigger indicator of just how important he feels he will be in the knockout stage.

Vardy and Rashford did their best, and may make contributions further down the line, but toothless England proved here that they simply cannot do without Kane.

Southgate gave several members of England’s squad who have been on the margins the chance to at least catch his eye.

Eric Dier’s importance was emphasised by his selection as captain in the absence of Kane and deputy Jordan Henderson – but this was not a night he will look back on with satisfaction.

Dier struggled, particularly in the first half, looking off the pace and giving away cheap possession. He did nothing to threaten Henderson’s status as Southgate’s main midfield pivot.

Vardy and Rashford did not do enough to place Raheem Sterling in peril, even though he has gone 22 England games without a goal.

It was also a difficult night for first-choice goalkeeper Pickford, who was largely unemployed in the wins against Tunisia and Panama.

Pickford had only picked the ball out of the net in those games, having no chance with either goal, but here he looked a little ring-rusty and was fortunate to get away with spilling the ball early on when Gary Cahill cleared Michy Batshuayi’s shot off the line.

It was his busiest game in the World Cup so far – and Southgate must hope he will be better for the experience.

Cahill was solid, while Danny Rose and Trent Alexander-Arnold showed Southgate can rely on them – but England’s first-choice World Cup line-up will still have a familiar look against Colombia.

Martinez made the bizarre, although some would say brutally realistic, claim before kick-off that winning was not his priority in this final group match.

However, he did get the victory to top the group and face Japan in the last 16, and some of the flashes from his team demonstrated the strength he has at his disposal.

This was a Belgium side without Romelu Lukaku, Eden Hazard, Kevin de Bruyne, Toby Alderweireld, Jan Vertonghen, Axel Witsel and Dries Mertens, to name but seven, in their starting line-up.

And yet, when they actually wanted to, they raised their game to a level beyond England.

If Martinez can bring this squad to the right pitch at the right time, this is potentially a World Cup-winning side.

Learned a lot from the game – Southgate

England manager Gareth Southgate: “I thought the game was a really good test for us. We knew the level was going to be higher than we’ve had even with teams making changes. Belgium had controlled possession in our back third and we found it tough to press, but in terms of chances, we were fairly even.

“I think we’ve learned a lot from the game. It will be a good game to go and review. The objective was a mid-term one. We’ve got everybody time on the pitch and they’re ready to come in, those that hadn’t previously played, and we’ve protected those who had.”

Shots on Target
Home2
Away4