Meet Nigerian female Student, Ali Cynthia Chineche who made A1 in all her WAEC Results (PHOTOS) 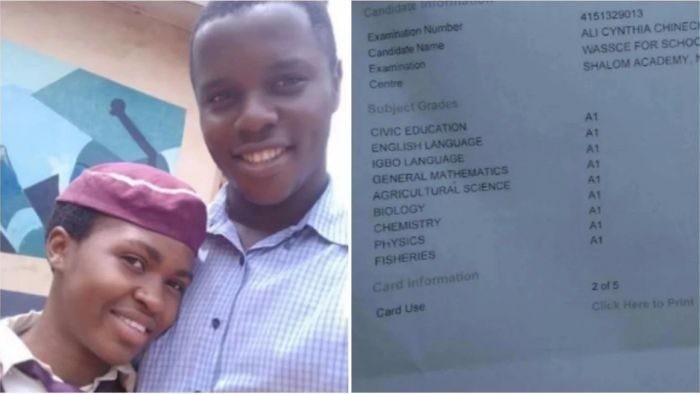 The student set the record high after she made all A’s in her nine subjects. She is the overall best students for 2016/2017 academic session in her school.

Chineche had represented her schools in various inter secondary school competitions and had won several awards including an award from Mathematical Society of Nigeria.

The genius student’s teacher, Chibulu Austin, who was proud of his student’s achievement, took to Facebook to share her result to the world.

In his post, Austin noted that he is very proud and happy to have taught the Enugu state-born student.

He wrote: “Today we have produced and I am very much proud teaching this lovely and wonderful lady in a great citadel of learning.”

Meanwhile, Nigerians have urged the Enugu state government to provide a university scholarship for the genius lady and show her appreciation for making her state proud.

“In a world peopled by men with even the tiniest regard for Excellence, this brainy Queen here would already be on her way to one of the best universities on GOVT Scholarship. Sadly, and to our collective shame as a people, ours is a broken society presided over by broken men who would rather squander millions and billions plus car gifts on some half [email protected] daughters of Eve on some beautiful nonsense called Beauty Pageant and other frivolities only to turn around and ‘gift’ outstanding students like this with mere Calculator and Mathematical Sets.

READ  Nigerian guy breaks down after checking WAEC result, says he should have cheated-Nigerians React(See the result)

Our sense of priority here is nothing short of a walking tragedy! The govt of Enugu state owe it to both man and God to see to it that exceptionally brilliant students such as this girl here, are made to see the inside of a university on Govt Scholarship.”

You may recall that the 2016 (WASSCE) also produced a Kaduna state student who also made all A’s.

The West African Examination Council after releasing the results indicated that more students scored credit passes in 5 subjects and above compared to 2015 and 2016.